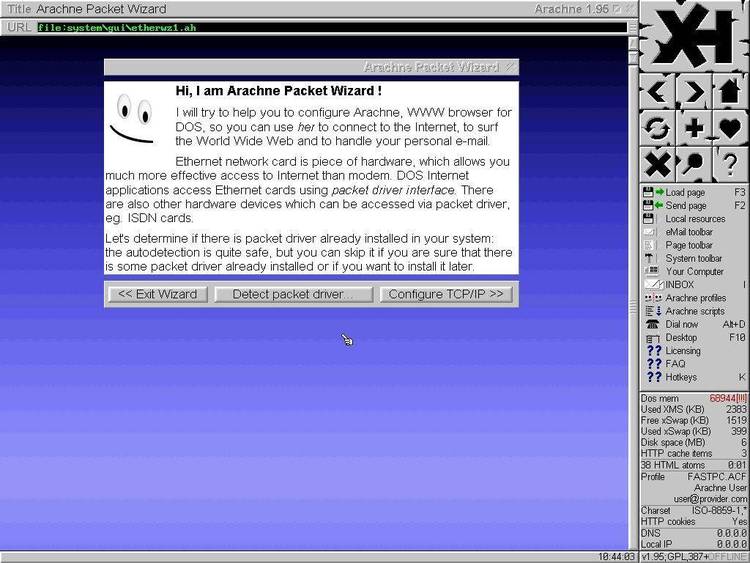 Contents of the DESQVIEW.DOC file

This text explains technical details to be understood in order to
use the packet drivers under DESQview. I lists tested examples and
expresses hopes for even better TCP/IP usability under multitasking.

DESQview is a system that I've been using for some years and that
I find terribly useful. It does true multitasking and windowing of
normal DOS applications and adds keyboard macros and cut & paste
beautifully. The setup of some applications may require technical
knowledge or assistance, but once done correctly, they perform nicely.
In this text, 'application' means the set of DOS programs that are
executed in one window.

When each DESQview application is installed, its maximum memory
size is indicated. DESQview itself can be installed in two flavors.
Either each application takes its size out of what DESQview does not
use of the 640 Kb the PC allows, and they must be swapped to disk to
make room for more. Or, with an EEMS or (true) LIM 4.0 board and
driver (expensive) or, by far the most comfortable, with a 386
processor and Quarterdeck's QEMM386 driver, much of the system
extensions, including DESQview, can be loaded above the 640 Kb limit,
and applications can execute simultaneously in large address spaces
(typically 535 KB) that can total up to physical (extended) memory
before swapping is required. The replicated address spaces are called
memory banks. The banks may be compared to the floors of a department
store, sharing the same ground area, but where different activities
can take place. DESQview 'switches in' each memory bank in turn to
give a few time slices of processor time to its application.

One problem under DESQview and EMM is that the packet drivers
execute calls to the TCP/IP applications. If they were executed before
DESQview is started, they would not be loaded in banked memory and
they would have to care to switch to the correct memory bank before
the call, like climbing to the right floor to call for the right
salesman.

Fortunately, there is a solution for the following two reasons:
1) These calls only occur only during a hardware interrupt. I
cannot swear for all packet drivers, but it cannot conceivably be
otherwise.
2) DESQview supervises hardware interrupts and detects when a
program grabs a vector to install a handler to service an interrupt
that DESQview considers for 'communication'. When such an interrupt
occurs, DESQview switches to the correct memory bank before giving
control to the handler. The 'communication' interrupts are: 2, 3, 4
and 7 (plus 5 on AT) and, in the latest versions (4.26), 8-15. (Note
that each application has its own set of interrupt vectors, but that
the handler will execute with the set of the application that was
interrupted, except its own interrupt 15h; it should rely only on its
private memory).
3) But when a packet driver just interfaces with another
driver, the latter may in turn do calls to the first. In this case,
try to apply the same method as in the text about IBMTOKEN below.

So, if a packet driver is loaded as part of an application, its
initialization will grab the interrupt vector of the communication
card, DESQview will notice this, and interrupts and calls will occur
under the correct memory bank. Should it be loaded before DESQview is
active to see which interrupt is used, DESQview will not switch memory
during interrupts, and the calls it cannot control will be made to the
wrong memory bank and crash the system. Note that this doesn't hold
for a flat memory space (first flavor) because there is no memory
bank. But packet drivers are of no use to more than one application
simultaneously (as I will regret below), and it consumes less
permanent memory to load drivers in the application even then.

The application should close the device nicely by executing the
packet drivers utility 'termin'. Termin makes sure no more interrupts
will occur. Should termin not work (or not be given a chance to be
executed, when the window is closed abnormally), things may still
work. Here is why:
1) On a PC, the default interrupt handler should make sure they
don't bother the system (either nullifying service (EOI+IRET) or best
preventing them to occur (mask them at the controller)).
2) If the window is closed, DESQview returns the interrupts to
the default handler (that was used before DESQview was started).
However, I have experienced that a Token-Ring card will crash the
system when on interrupt IRQ2 but not on IRQ10 or IRQ11. Experiment if
necessary.

In any case, the application must be installed as non-swappable.
Note that the rumor that DESQview moves code about in memory is false,
only Windows does.

With QEMM, make sure it knows where your communication card RAM
is (QEMM parameters). Some cards hide the RAM until initialized.

A application using a packet driver can be installed by cloning
'Big DOS'. It must be non-swappable. Of course, 'Memory Size' depends
on storage available and needed by the TCP/IP program. The examples
below run with DESQview 2.26, QEMM 5.0 and drivers 7 on a PS/2 70:

with the procedure TCPIP:

If one wishes DOS commands under packet drivers, use only the
application setup 'Parameter': 'call command /E:1024'. 'EXIT' will
terminate the application nicely.
Note: really, 3C523 v6.1 has (had?) a bug that can be overcome by
executing the version 5 once after each machine boot.

IBMTOKEN uses the IBM drivers DXMA0MOD.SYS and DXMC0MOD.SYS (A
and C for short). This complicates things a bit.

C is the driver to grab the communication vector and, for the
same reason as with packet drivers, must be loaded within the DESQview
application. But C calls A for services via interrupt 5C. And if
closing an application does not tell C to 'say good-bye' to A (if ever
there is provision for that) before simply removing it from memory, A
will tell C that it is already loaded when the application is started
again. Consequently, A too must be loaded inside the application so
that a fresh copy won't complain. But A sets flags in low core and
will say that it is already active. Resetting these flags is the end
of the story (almost, sorry but that's the way it is). DESQview
installs a front-end to make sure that interrupt 5C is not preempted
by another task. Letting things go would make A installing only its
own 5C processing, and without DESQview's front end, TCP/IP will lock
after a while by receiving no more IP data. Resetting the flag and
preserving DESQview's front-end is the trickery behind the modules
IBMTRDVx that I added to the packet driver collection.

Using IRQ2 for the Token-Ring card will crash the system when the
window is closed and C 'brutally' removed from memory. Configure it to
use IRQ10 or 11 instead (on a PS/2, that's booting with the reference
diskette to change the TRN card setup). Then, use the application
installation above with the following procedure TCPIP:

Notes:
- the command 'device' is DESQview's, to load a SYS device driver as
if it were plain COM.
- Without the 'Locally managed address' parameter, a comma is
required. I don't know which of IBM or Quarterdeck is right about the
parameter memory format.
- The whole Token Ring stuff is my real best. It works fine. But I
cannot guarantee it does in all versions of the products involved.

Packet driver applications will execute in only a single DESQview
window, just like under monotasking DOS, but no worse. TCP/IP has been
devised with a multitasking environment in mind. MSDOS did not provide
multitasking, forcing people to write monotasking TCP/IP applications
instead. They probably simulate multitasking internally to some
extent. Now that we have DESQview and Windows 3, TCP/IP on the PC
should be rethought.

Multitasking DOS TCP/IP is making IP+TCP run in a separate window
and applications (in other windows) interface with them via a socket
API. This means an unloadable socket driver module that would depend
on the environment, and interface the applications with the module
containing IP+TCP. Under plain DOS, it would make plain calls. Under
DESQview or Windows, it would be in common memory and provide task
switching and synchronization (doing without loops).

TCP Inc have (maybe a standard for) a socket API and told me they
have tried but got problems to make it DESQview compatible. I guess it
should be feasible and that all is to be gained by everyone if FTP Inc
did cooperate with Quarterdeck and Microsoft for a tremendous
improvement of this API. I wouldn't be surprised most public domain
TCP/IP applications use the socket API, even if internally, and should
be easily converted to use an external one, maybe on a bimodal basis
to make them portable.
DESQview and Windows environments are similar enough in this
respect to kill the two birds with one stone.
I hope Quarterdeck won't mind my quoting their words. I'd like
them to be heard by FTP Inc. about feasibility:
"One thing I can tell you: we are working on a driver which does
indeed watch for NETBIOS or IPX calls which would require that the
program be "mapped" back into memory in order for the call to operate
correctly."

And now that the packet drivers have promiscuous mode, a similar
enhancement would be most welcome at the data link level: recognize
the environment, remember the address space of subscribers and provide
task switching. Wouldn't it be lovely to have NETWATCH trace an
application in another window?.

Finally, I'll report some words about usability of TCP/IP
applications to us, those 'foreign' languages speakers. We badly need
an 8-bit character set. The problem is that extensions of ASCII on
different computers are incompatible and, for example, that text sent
from a PC to a Mac or vice versa is incorrect. Just as IBM EBCDIC has
to be translated to a common line code, ASCII, those different
extended codes should be translated to a common one. RFCs should state
(or programs act as if they did) that 8-bit is allowed (most often, 8-
bit 'works') and that the code to be used is the true international
standard ISO 8859. X-Windows already does that, why not Telnet, FTP
and SMTP to name the main ones? IBM shouldn't be allowed to slip in
its PC and EBCDIC codes by lack of standard. Even Telnet 3270 should
use ISO 8859 because no one but IBM mainframers know what EBCDIC is
(or should I say 'one' EBCDIC?).
But by far the easiest is that all those systems themselves start
using ISO 8859, isn't it?
Thanks for considering this point for us to enjoy TCP/IP as much
as you do.