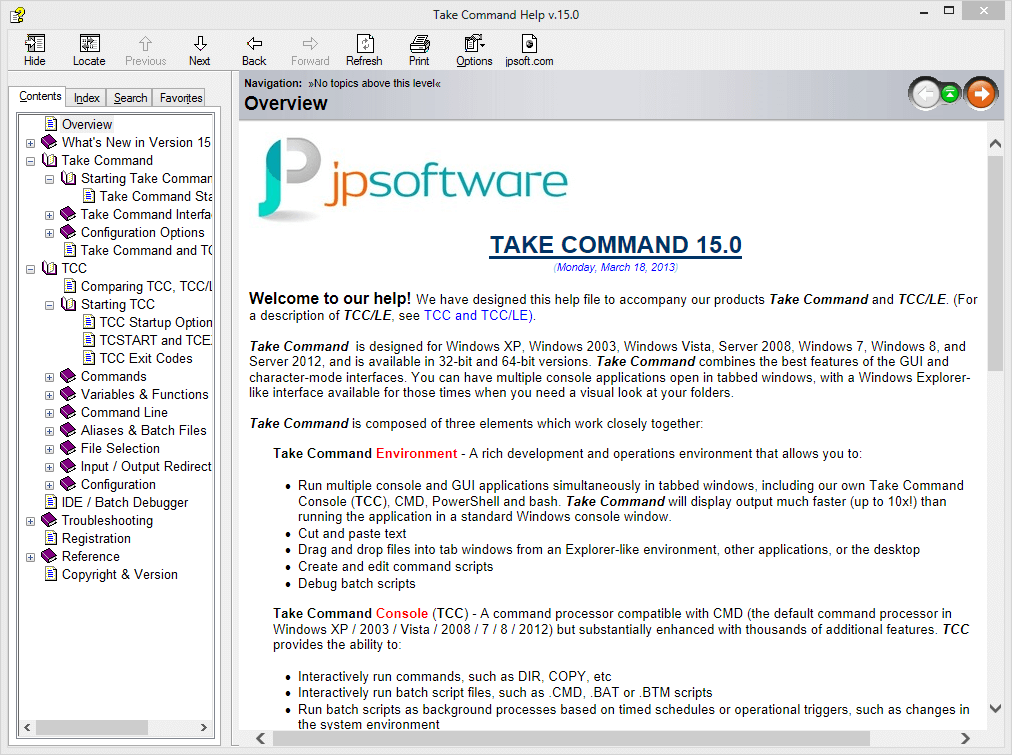 Contents of the 4MAP.DOC file

A Keybinding Program for 4DOS
by
Ho-Ping Tseng


This program may be freely distributed for non-commercial, non-business,
and non-governmental uses, provided this notice is attached with it. My
only request is that if you plan to use it regularly, you let me know of
it through e-mail or postal mail, so that I have an idea of how useful
this program is. Please let me know of any comments that you may have
and any suggestions or criticisms.

This program provides two basic capabilities for the 4DOS command
line processing. First, it filters keyboard inputs through a user-defined
keymap, before they reach 4DOS. Second, it can launch executable programs
in response to keystrokes while within the 4DOS command line.


With these two functions, a user can customize and remap 4DOS key
definitions. In addition, 4DOS command line editing functions may be
expanded. As an example, a minimal vi-like implementation is included that
uses many of the keys familiar to vi users and provides similar edit and
insert modes.


Note that this program differs in purpose to that of the conventional
keymapping programs. It is meant to take effect only during command line
processing, and it can map keystrokes sequences, not just a single keystroke.
Also, editing functions can be added on top of that provided by 4DOS with
its program launching capability.

This program is implemented as a terminate and stay resident routine
(TSR). It takes up about 2500 bytes of memory. It has been tested on the
latest versions of 4DOS (3.01 and 3.02).

The basic functionalities of this program is included in 3 files:
"4map.exe," "putmap.exe," and "mapdef." 4map.exe implements the filter and
stays resident in memory. Putmap.exe installs the user-defined keymap into
memory. And finally, mapdef contains an example keymap.


Also included is "edit.zip," which contains programs that perform
miscellaneous command line editing functions. They are invoked by 4map.exe
in response to keystroke sequences defined by mapdef.

4map.exe and putmap.exe can be run from the command line or more
conveniently placed in autoexec.bat. They can be run either before or
after starting 4DOS. To run, type the following or include them in
autoexec.bat:
4map
putmap mapdef


This assumes, of course, that 4map.exe and putmap.exe are placed
in a directory that is in the search path. Also, if mapdef is not in the
current directory (root if these were invoked in autoexec.bat), its full
pathname must be specified.


To install the programs in edit.zip, as defined by the contents of
mapdef, make a directory on the C partition of the disk called MAP and copy
edit.zip into it. Then unzip edit.zip.


Note that the functionalities provided by edit.zip is optional, and
map.exe would function equally well (albeit without these functions) even
if it is not installed.


The contents and format of the map definition are discussed next,
plus a description of mapdef and edit.zip.

A keymap file contains definitions of keystroke mappings that 4MAP
uses to perform its operations. Several sets of mappings are allowed in
this file (with the first set being the default used when a keymap is first
installed), and 4MAP gives provisions for switching from one to another.
This will be described in more detail later. For convenience, when a "map"
is referred to below, it will mean a set of these mappings.


Each map is defined by the construct:


Each rule is further represented by two fields, the "pattern" and
its "binding", defined by the construct:

"Pattern" denotes a sequence of keystrokes that is used to match the
keyboard input. 4MAP successively examines each pattern according to
its location in the map, with the ones closer to the beginning of the
map searched first. When a partial match occurs (the input sequence
matches the pattern so far but is shorter than the pattern), the search
is suspended until more input is received. At the first instance that
4MAP can determine whether or not the input sequence produces a match,
certain actions are performed. If a match did occur, "binding" is
executed. Otherwise the input sequence is sent to 4DOS unmodified.

Each pattern may contain keynames (such as "del" and "home")
ascii codes, random keystrokes (e.g. abcd), and wildcard characters.
Keynames are reserved words and are provided for convenience. A list
of them is provided in the Appendix. Ascii codes may be specified in
octal (preceded by 0, such as 0101 for the character 'A'), decimal
(such as 65 for 'A'), or hex format (preceded by 0x, such as 0x41 for
'A'). Wildcard characters include '?' for matching any single keystroke
and '*' for matching any sequence of keystrokes. The special character
'\' is used as an escape character, so that the character immediately
following it is used literally as part of the pattern. To use '\' in
the pattern, just enter '\\' instead. Also, commas, spaces, tabs, and
carriage returns are treated as delimiters and ignored; they must be
preceded by '\' to be part of the pattern (or specified by keynames
where appropriate or in ascii codes).

denotes a keystroke sequence of: 'a', 'b', the delete key, '4', any keystroke,
and 's'. Note that in order to avoid '4' from being treated as control-d
rather than the key '4', it must be preceded by the escape character. In
general, all numerals are treated as ascii codes unless preceded by '\'.


To use the sequence 'd', 'e', 'l' as part of the pattern rather
than to specify the delete key, the above pattern may be changed to:

or variations of these.

A binding represents a list of actions that is performed when
its corresponding pattern matches the keyboard input. It is separated
from the pattern by the delimiter '=>' and can be classified into two
basic types. Each of these are described below.


The first type simply performs the mapping function--given an
input that matches the pattern, certain keystroke sequence is sent to
4DOS as though it had just been typed by the user. To specify the
sequence, similar mechanism to that used to specify the patterns is
used here--it is specified with keynames, ascii codes, and random
keystrokes. As with patterns, commas, spaces, tabs, and carriage
returns are used as delimiters, and '\' is used as the escape character.
The various rules described above for the pattern specifications apply
here as well (except wildcard characters are not used here). For example,

maps 'k' into the sequence: del, ins, 'a', and ins. In the context of 4DOS,
this would mean that whenever 'k' is typed, the character at the cursor is
replaced by the character 'a'.


The second type consists of command requests to 4MAP. It currently
includes a command to change the current map and one to invoke a program.


Switching to another map is facilitated by the keyword "changemap".
When the binding containing this keyword is executed, the current map is
changed to the one specified by the argument of "changemap", and subsequent
inputs are mapped according to the definitions given in this new map. Thus,

would change the current map to "insert". Using this mechanism, several
maps may be defined that could provide different mapping characteristics
or "modes." In the keymap provided, this is used to simulate the insert
and edit modes of vi. Note that when a keymap file is first installed,
the first map becomes the current one.


Invoking a program requires enclosing the full pathname of the
program file and its arguments inside the special character '`' (back
quote). It is used to launch a program in response to an input sequence.
For example,

changes the current map to "insert" and executes \map\prog.exe with an
argument of 2 when 'i' is typed. Note that to accommodate DOS and for
convenience, '\' is not recognized as an escape character within the back
quotes--there is no escape mechanism for program name specification. Also,
no error message is displayed if an error is encountered while executing the
program. In particular, if the program file does not exist, no action is
performed.

Comments may be inserted anywhere in the keymap file to increase
readability. They are delimited by '/*' at the beginning and '*/' at
the end--everything in between is ignored.

As a summary, characters or character sequences possessing special
meanings to 4MAP are listed below:

As an example of the capabilities of 4MAP, a keymap definition
file is included. It defines three modes: command, insert, and edit.
In the following descriptions, '^X' will denote control-X (the keystroke
where the control key is held down while simultaneously hitting 'X').

At the beginning of each command line editing session, the command map
is used. This mode has very similar key-bindings to the 4DOS specifications,
with a few modifications:

In this mode, all inputs are entered onto the command line without
deleting what was originally there. Aside from that, it is very similar
to the command mode:

In this mode, all keystrokes correspond to commands and are not
considered input to the command line: