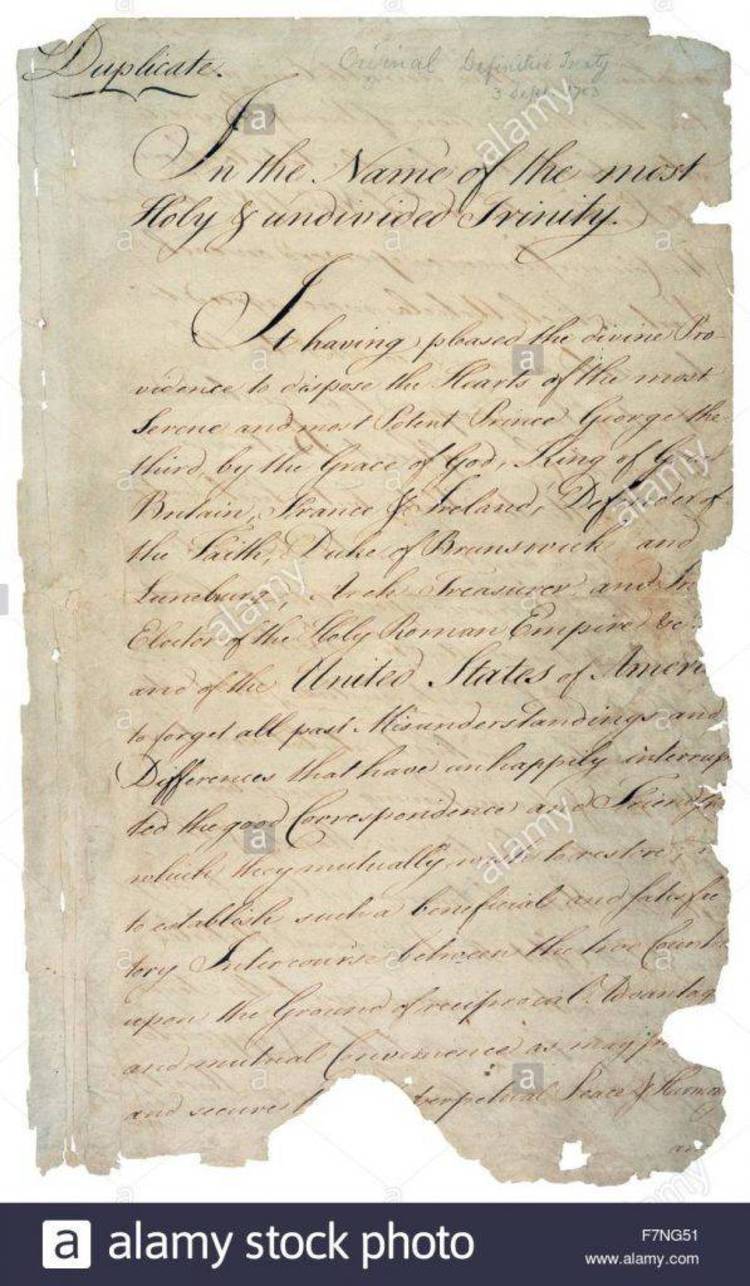 Contents of the PARIS783.TXT file

In the name of the most holy and undivided Trinity.

His Brittanic Majesty acknowledges the said United States,
viz., New Hampshire, Massachusetts Bay, Rhode Island and
Providence Plantations, Connecticut, New York, New Jersey,
Pennsylvania, Maryland, Virginia, North Carolina, South Carolina
and Georgia, to be free sovereign and independent states, that
he treats with them as such, and for himself, his heirs, and
successors, relinquishes all claims to the government, propriety,
and territorial rights of the same and every part thereof.

It is agreed that the people of the United States shall
continue to enjoy unmolested the right to take fish of every
kind on the Grand Bank and on all the other banks of Newfoundland,
also in the Gulf of Saint Lawrence and at all other places in
the sea, where the inhabitants of both countries used at any
time heretofore to fish. And also that the inhabitants of the
United States shall have liberty to take fish of every kind on
such part of the coast of Newfoundland as British fishermen shall
use, (but not to dry or cure the same on that island) and also
on the coasts, bays and creeks of all other of his Brittanic
Majesty's dominions in America; and that the American fishermen
shall have liberty to dry and cure fish in any of the unsettled
bays, harbors, and creeks of Nova Scotia, Magdalen Islands, and
Labrador, so long as the same shall remain unsettled, but so soon
as the same or either of them shall be settled, it shall not be
lawful for the said fishermen to dry or cure fish at such
settlement without a previous agreement for that purpose with
the inhabitants, proprietors, or possessors of the ground.

It is agreed that creditors on either side shall meet with
no lawful impediment to the recovery of the full value in sterling
money of all bona fide debts heretofore contracted.

It is agreed that Congress shall earnestly recommend it to
the legislatures of the respective states to provide for the
restitution of all estates, rights, and properties, which have
been confiscated belonging to real British subjects; and also
of the estates, rights, and properties of persons resident in
districts in the possession on his Majesty's arms and who have
not borne arms against the said United States. And that persons
of any other decription shall have free liberty to go to any part
or parts of any of the thirteen United States and therein to
remain twelve months unmolested in their endeavors to obtain the
restitution of such of their estates, rights, and properties as
may have been confiscated; and that Congress shall also earnestly
recommend to the several states a reconsideration and revision
of all acts or laws regarding the premises, so as to render the
said laws or acts perfectly consistent not only with justice and
equity but with that spirit of conciliation which on the return
of the blessings of peace should universally prevail. And that
Congress shall also earnestly recommend to the several states
that the estates, rights, and properties, of such last mentioned
persons shall be restored to them, they refunding to any persons
who may be now in possession the bona fide price (where any has
been given) which such persons may have paid on purchasing any
of the said lands, rights, or properties since the confiscation.

And it is agreed that all persons who have any interest in
confiscated lands, either by debts, marriage settlements, or
otherwise, shall meet with no lawful impediment in the prosecution
of their just rights.

That there shall be no future confiscations made nor any
prosecutions commenced against any person or persons for, or by
reason of, the part which he or they may have taken in the present
war, and that no person shall on that account suffer any future
loss or damage, either in his person, liberty, or property; and
that those who may be in confinement on such charges at the time
of the ratification of the treaty in America shall be immediately
set at liberty, and the prosecutions so commenced be discontinued.

There shall be a firm and perpetual peace between his
Brittanic Majesty and the said states, and between the subjects
of the one and the citizens of the other, wherefore all hostilities
both by sea and land shall from henceforth cease. All prisoners
on both sides shall be set at liberty, and his Brittanic Majesty
shall with all convenient speed, and without causing any
destruction, or carrying away any Negroes or other property of
the American inhabitants, withdraw all his armies, garrisons, and
fleets from the said United States, and from every post, place,
and harbor within the same; leaving in all fortifications, the
American artilery that may be therein; and shall also order and
cause all archives, records, deeds, and papers belonging to any
of the said states, or their citizens, which in the course of
the war may have fallen into the hands of his officers, to be
forthwith restored and delivered to the proper states and
persons to whom they belong.

The navigation of the river Mississippi, from its source
to the ocean, shall forever remain free and open to the subjects
of Great Britain and the citizens of the United States.

In case it should so happen that any place or territory
belonging to Great Britain or to the United States should have
been conquered by the arms of either from the other before the
arrival of the said Provisional Articles in America, it is
agreed that the same shall be restored without difficulty and
without requiring any compensation.

The solemn ratifications of the present treaty expedited in
good and due form shall be exchanged between the contracting
parties in the space of six months or sooner, if possible, to
be computed from the day of the signatures of the present treaty.
In witness whereof we the undersigned, their ministers
plenipotentiary, have in their name and in virtue of our full
powers, signed with our hands the present definitive treaty and
caused the seals of our arms to be affixed thereto.

Done at Paris, this third day of September in the year of
our Lord, one thousand seven hundred and eighty-three.

Source: United States, Department of State, "Treaties and Other
International Agreements of the United States of America,
1776-1949", vol 12, pp8-12

The Peace Treaty of 1783, also known as The Paris Peace Treaty,
ended the United States War for Independence. Representing
England was Richard Oswald, chief negotiator under the Earl of
Shelburne, the Secretary of State; signing for Britain was David
Hartley. Representing the United States of America were John
Adams, Benjamin Franklin, and John Jay, all of whom signed the treaty.

This treaty gave formal recognition to the United States of America,
established her boundaries, (at the time), secured certain fishing
rights, addressed problems between creditors, provided fair treatment
for those who decided to remain loyal to Great Britain, and opened up
the Mississippi River to navigation by citizens of both signatory
nations.

Permission is hereby granted to download, reprint, and/or otherwise
redistribute this file, provided appropriate point of origin
credit is given to the preparer(s) and the National Public
Telecomputing Network.