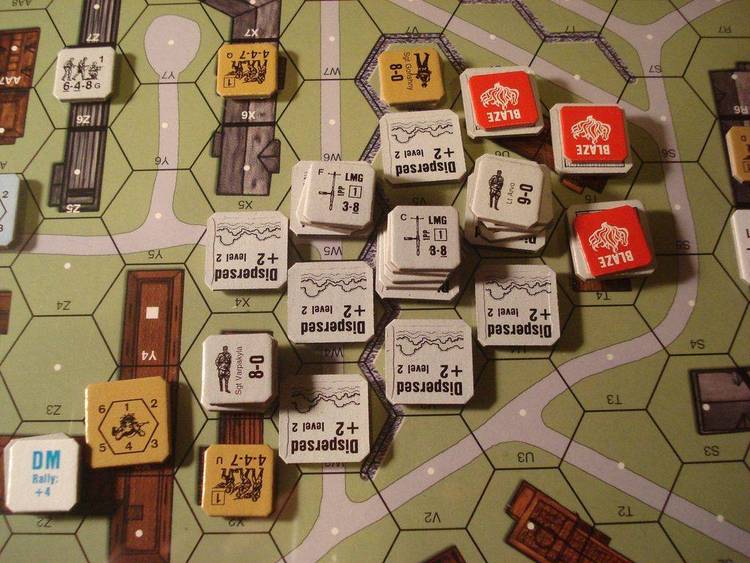 Contents of the ASL_GEN.DOC file

asl_gen.exe - The Program
asl_gen.doc - This doc file
table.dat - A table of boards to use (see below)
theatre.dat - theatre data file (do not change!)

ASL_GEN is a program to generate random scenarios for the Avalon Hill
board game Advanced Squad Leader. It is very loosely based on an
article by Greg Schmittgens and Charles Kibler in AH's magazine THE
GENERAL. The program could also be used for the original Squad Leader
game with no problem.

Just type ASL_GEN at the DOS command line. You will be able to save
the results to a file for editing or printing. Normal editing
features now work when inputting the filename. If the file already
exists, the new data will be appended without confirmation.

Set up info is now contained in the Special Rules sections included
when the scenario is printed to a file.

All reinforcements must enter on the long board edge of
the players home board. When purchasing forces use the following
rules:

1. A player with attack or recon initiative may not spend to increase
his SAN.

2. A player with defend initiative is the only one allowed to
purchase any fortifications (except "?" counters).

3. Only a side with attack initiative may purchase paratroops or
gliders.

4. All purchases should be done in secret if possible. This creates
great "fog of war".

That is all you need to get started. Go ahead and try it, then come
back to the docs when you have questions, or you want to customize
the program to include only the ASL boards you own.


What does it do?

It is then up to you to check the setup info in these docs and
purchase your forces from the order of battle of the listed
nationality. Then blast away on your boards.

Theatre - The theatre is chosen from the Eastern Front, Western Front,
Italy, or North Africa. For these purposes the Eastern Front also
represents all fighting in the Balkans by the Russians (1944 on), and
North Africa also includes the fighting in East Africa. Western Front
includes Norway and everything else involving the western allies
except the Italian front. Italy includes Sicily, Greece/Crete, and
Yugoslavia. I did not include the Polish campaign.

Board Config - Alignment of the boards is really up to the players,
but if you can't agree use the program. Check the special rules
for further alignment options.

The board table file (table.dat) is a text file that is read by the
program to determine what boards you wish to use for the various
terrains. I have included a table.dat file that contains most of the
boards released by Avalon Hill for the ASL system. I know everyone
doesn't own all of these, so you can edit the file as you wish. I use
a formatted read so don't change the order of anything, or you could
likely cause the program to go west. Working from a copy would be a
good idea. Only change the board numbers in the columns and nothing
else. Do NOT add boards numbered higher than 33 or else the Victory
Conditions for your scenario could get screwed up. When new boards
are available, I will incorporate them into the program in the next
release. Also, adding the river boards (7 and 8) is legal, but
scenarios won't be valid unless some other rules are introduced and
bridges are added. Read the article from THE GENERAL if you wish to
do this.

The new format for the table.dat file includes three different tables.
The first is the board table for all theatres except North Africa and
the Pacific. It is the one following the key text "_ b_norm". The
next is the table for North Africa and the third is for the Pacific
(when it is released).

The tables are layed out as such:

The column heading represents the terrain type. Under it are all of
the boards that you wish to use for that terrain type. At least four
different boards are required in any column. There's absolutely
nothing wrong with using a city board under the Woods column or
whatever. For example, if someone only owned the boards from "Beyond
Valor", and "Paratrooper", the table could look like this:


As you can see, as long as there are at least four different boards in
each column, anything will work. Having the same boards more than
once in a column is not a problem.

WARNING: The table.dat file must be present for the program to run.


Weather - The weather is chosen depending on the date and the theatre
according to a modified chart based on the ASL rulebook. This is an
optional rule. Wind is also determined along with any Special
conditions related to North Africa.

Initiative - The initiative of the different nationalities are used to
determine the type of scenario to be played. The initiatives are
based on historical data although local situations on the scale of ASL
could (and should) be radically different.

Game Length - game length is between 5 and 10 turns.

Victory Conditions - Most taken from the article, although there are
some new ones, and some were thrown out based on my individual tastes.

A Word About Play Balance

I've played many of these scenarios and balance will largely depend on
your purchases of forces. Remember your task (victory conditions)
when purchasing forces. If you're going to have to control buildings,
then by all means get some infantry. If you've got to cover four
boards in six turns, then you'll probably want enough transport for
your forces. Still, some scenarios will be unbalanced. Better
to play each scenario twice (switching sides) in tournament
situations. When you play a few of these, you'll be better able to
pick out the unbalanced ones and not even bother setting them up.


Why did I write it?

Two reasons. First to learn a little more about 'C' for work.
Second, because I liked the aforementioned article from THE GENERAL,
but it seemed to take a long time to generate the scenarios, and then
we might not want to play them for various reasons. The computer
allows us to go through many situations quickly and then pick one we
like. Also, if you're a true ASL fan, DYO is a great way to use the
weapons that aren't included in the scenarios. AH's DYO rules are
nice for purchasing forces, but players can rarely agree on Victory
Conditions, board layout, game length, etc. This program does all of
that randomly.

For ASL_GEN, I plan to include the Japanese and the Chinese when they
are introduced (all the hooks are already there.) I would like to
make the program more customizable (is that a word?) by allowing the
user to input the ASL modules he has, and then using only the
corresponding theatres/nationalities to generate the scenarios. Right
now, though, that would involve a major rewrite.

A future project would involve the actual purchase of forces and would
include all of the data contained in the ASL Rulebook for DYO purchase
of forces. I have some things done with this, but major changes would
be necessary for me to release it (I use it now, however). Finding
time will be difficult.

IF THEY WERE KNOWN BUGS I'D HAVE FIXED THEM!!!

Actually, there is one. For some odd reason you will probably get a
program crash with the DOS message "divide error" occasionally. This
doesn't happen very often, and seems totally random. That's why I
couldn't track the thing down, but I'm still working on it.

If you find any others, let me know.

Nothing, but if you really like the program and want to see more
utilities for AH wargames, send me a note to let me know what you'd
like to see. Any donations would be graciously accepted as they allow
me to support my habits, but just a word of thanks would be
sufficient. This program is not shareware or public domain. You may
use it for its intended purpose as long as you do not change any of
the associated files included in the archive.

All parties are encouraged to distribute this program wherever they
see fit as long as all files are included and remain unchanged.

I just wrote the program. The real work was done by the folks at
Avalon Hill. Thanks to them for creating a wonderful game! Special
thanks to Greg Schmittgens and Charles Kibler who wrote the article
that inspired this program.

Both ASL_GEN and this documentation are copyrighted by the author.
ASL_GEN IS INTENDED FOR YOUR PRIVATE, NONCOMMERCIAL USE ONLY. You may
make copies of the ASL_GEN program and documentation files for your
own use, and you may copy the files for others. You may not, however,
charge for such copies, or in any other way sell the program or
otherwise attempt to make money from it or any modified version of it.

ASL_GEN has been tested on as many different configurations as
possible, however, it is impossible to test all. I do not warrant that
the documentation is accurate, or that the program operates as
designed. I will not be liable for any damages of any kind sustained
through the use of the program. By using the program, you agree to
this.

Your comments, suggestions, and friendly criticisms are welcome.
The best way to contact me is via U.S. Mail, although you may find me
hanging around local (Rochester, NY) bulletin boards, Usenet, or other
shady electronic areas.

Both ASL_GEN and this document are:
Copyright (c) 1990 by