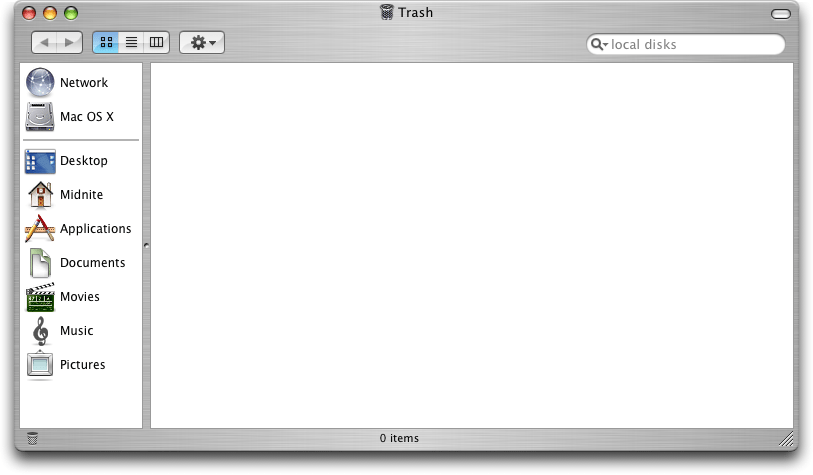 Contents of the SCAVENGR.WRI file

SCAVENGER is a stupid little utility that attempts to fix two stupid problems with the File Manager. First, although the File Manager has drag&drop ways to copy and move files (although you have to remember some absolutely counterintuitive shift key combinations) there is no drag&drop way to delete files, ie. no trashcan. Second, for some f...ing reason the File Manager tries to update its windows after deleting each single file, even if you are deleting a group of files that you have selected as such. This makes deleting incomparably slower than moving. From what I have seen, these problems are not going to be fixed in Windows 3.1.
SCAVENGER lets you designate a dedicated directory (a "spool" directory) that serves as your trashcan. Instead of directly deleting files, you move them to the trashcan and let SCAVENGER take care of them.

How to use SCAVENGER

Create a new directory whose name starts with an atypical character just off the root of your C drive. Later you will have to tell SCAVENGER the name of this directory, so it is to your advantage to use the SCAVENGER default name which is C:\~WASTE. When you start the File Manager, open the directory and minimize its window. The window becomes an icon on the background of the File Manager main window, and with just a little imagination you can look at it and see a trashcan. If you have something like Norton's BATCHRUN or Visual Basic, you can make them send the appropriate commands to the File Manager to open and minimize the window so you don't have to do it yourself. For example, the following Visual Basic statements will do the job (if the directory name starts with ~):

When you want to delete a file, a group of files, or an entire directory, just drag-move them to the icon. If SCAVENGER is running and enabled (see below) it will immediately start deleting in the background. If not, the files will be detected and deleted next time SCAVENGER is started.

As indicated, SCAVENGER runs in the background. Unfortunately, Windows doesn't have the hooks to handle task priority (eg. nice()). To make SCAVENGER run smoothly in your environment, you have to tell it how often to activate itself, and how long to stay active each time. You do this in the Preferences... dialog. Both of the timing settings are in milliseconds (msec). To change a setting, you can do one of three things:

On my 16MHz 386SX, I have set 'Start deleting' to 2000 msec (ie. 2 sec) and 'Stop deleting' to 200 msec (ie. 1/5 sec). However, SCAVENGER mostly manages to delete only 1 file during the 200 msec. I'd like to know how this works with faster machines - please send me a note. You can find out by disabling SCAVENGER after one cycle (see below).
In the Preferences... dialog, you can also tell SCAVENGER the name of the directory you use as trashcan. Note that SCAVENGER will check if the directory exists - you should create it first before you change the SCAVENGER setting. And finally, you can tell SCAVENGER how to handle special files - read only, hidden, and system. There is a three state check box for each of these flags. Leaving the check box off will cause SCAVENGER to ignore files with the corresponding flag set, ie. not to delete them and just leave them in the trashcan forever (or until you change the setting). Turning the check box on will cause SCAVENGER to delete files with the corresponding flag set just like normal files without further ado. Graying the check box will cause SCAVENGER to ask you what to do with a file with the corresponding flag each time one is found in the trashcan. Note that if you simply click NO when SCAVENGER asks you, the file will remain in the trashcan and you will be asked again as soon as it is found by the next cycle through the trashcan directory. You don't have to be nagged again and again, however. When SCAVENGER displays the message, you can switch back to the File Manager, reopen the trashcan, and move the file back to its original location if you have changed your mind about deleting it.
You can turn SCAVENGER on/off with the Deleting item on its menu. If SCAVENGER is currently on (ie. deleting files) the menu item appears with a checkmark. This option is useful for testing, or if you use SCAVENGER in tandem with an undelete utility. Unless your undelete is very smart, it will undelete the file(s) to the same directory from which it was physically deleted, ie. the trashcan. You must turn SCAVENGER off temporarily to get a chance to move the file(s) back to the safety of their original locations.

Files included in this package

Note: Both libraries must be accessible through your PATH variable for SCAVENGER to start.

This is a beta release of SCAVENGER. I have been running SCAVENGER on my system for about a month now, but I don't have the time to put it through a rigorous test cycle. Anyone reporting a bug or contributing a valuable suggestion for improvement will be considered for a free upgrade to the final release (which is planned to be shareware). My address is

Hope to hear from you soon!
itz. detail