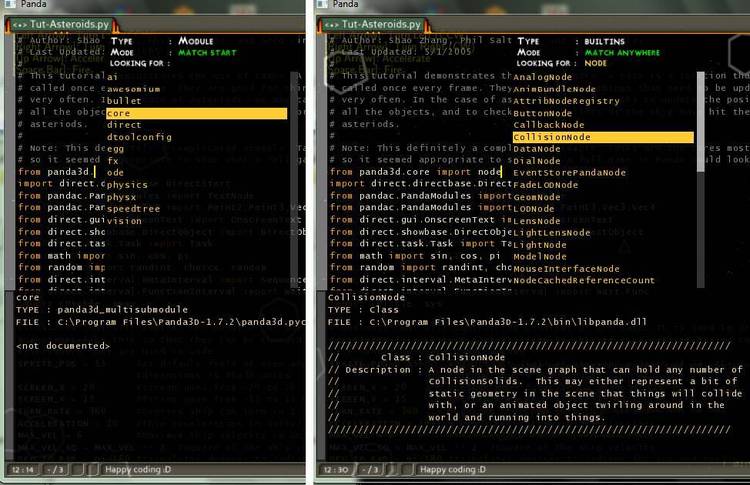 Contents of the ASTEROID.TXT file


ASTEROID is copyright (c) 1990, 1991 by Todd B. Crowe. There is
no warranty implied or otherwise. You may copy the program
freely but it must be accompanied by this text file. You may not
modify any of the code or this file without my permission. The
program may not be sold or distributed commercially or otherwise
for profit. I reserve all rights and privileges to this program.


ASTEROID is a Presentation Manager implementation of the original
Asteroids(TM) game. Currently the only major shortcoming of
ASTEROID is the lack of sound (a feature which is not likely to
change). ASTEROID requires OS/2 1.2 or later.


A brief history of ASTEROID:


ASTEROID resembles very closely the arcade game Asteroids. It
supports the player attraction modes, the high score entry
screen, a high score table, a custom font, and 2 player mode.
Enemy space ships appear on the screen and fire directly at the
player's ship. The player may hyperspace, but, as in the arcade
game, the player's ship randomly blows up on reentry.

Beginning in ASTEROID 2.0 high scores, window size and position
information, and frame control status were saved in a profile.
ASTEROID 2.1 adds a system menu, a help screen, and the ability
to customize the number of ships per game, the number photons
that may be fired at simultaneously, the use of the shield, and
the keys for controlling the ship.


If you want to run ASTEROID from a full screen prompt simply
type:

If you want to install ASTEROID in a Presentation Manager program
group: create a "New..." program entry and supply a drive and
path in the "Path and file name" entry field:

No parameters are required.

The file ASTEROID.DLL must be in a directory in your LIBPATH
(e.g. C:\OS2\DLL); if it is not ASTEROID.EXE will display an
error message box and then terminate. ASTEROID.DLL contains the
two custom fonts used by ASTEROID.EXE.

On slower machines asteroid movement may look very jumpy. In
fact, everything moves at the same rate on a slow computer as a
fast computer. On a slow computer the asteroids are just redrawn
less often.


ASTEROID 2.1 now allows the user to select which keys control the
ship. To change the default keys select the "Keys..." menu item
in the "Options" menu.

The game play functions have the following default key
definitions: