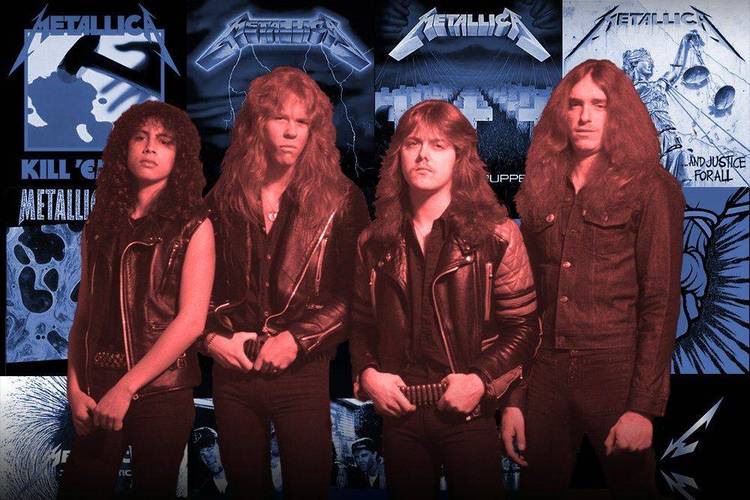 Contents of the METALICA.TXT file

Lars Ulrich, fan of the New Wave Of British Heavy Metal' and especcially
Diamond Head, moves from Copenhage to Los Angeles to found hiw own, European
sounding heavy metal band. The first to join him is guitarplayer James Hetfield
and a friend gets them the name Metallica. They record their first demo, with
Lars on drums and James on bass, guitar and vocals. A friend of them,
guitarplayer Lloyd Grand does the guitarsolo on the song "Hit the Lights!",
that short after the recording is released on the compilation album
"Metal Massacre I". In january of 1982 Dave Mustaine joins the band, so they
got now their own solo-guitarplayer. James' roommate Ron McGovney is their new
bassplayer. The band starts to play in L.A.-clubs, but when the glam and
poserrock comes up, they move to San Francisco. A second demo is recorded and
gets them a fast growing popularity in the underground-scene. For a while
guitarplayer Jeff Warner (now: Black'n'Blue) joins the group, but he leaves
after a short time. In july '82 their legendary "No Life till Leather"-demo is
released and everyone is waiting for their debut album. End of '82 bassplayer
Cliff Burton joins the band. In january of '83 the band is invited by record
shop-owner Jon Zazula to do some gigs at the Eastcoast. He also tries to get
them a contract, but when this fails, he founds his own record label, Megaforce
Records. The band gets troubles with Dave Mustaine and he is fired. He is
replaced by Kirk Hammet, coming from the band Exodus. In may they record the
first album "Kill Em All" in Rochester. It's a smash hit. Songs like "Metal
Militia", "Seek & Destroy" and "Hit the Lights", well known by many headbangers
thanks to their demo's, become real classic songs. These compositions are also
admired outside the metal-scene, because of the very tight, open chord
scheme's. After the release they tour through America with Raven and through
Europe with Venom. After this tour they start making new material for their
second album "Ride the Lightning". Because the album is recorded in Denmark,
they do also a mini-tour in England with Twisted Sister. With Peter Mensch they
get themselves a good manager (Def Leppard) and he arranges a major record deal
for the band. In a couple of weeks they sell more than 100.000 albums, unique
for an independent heavy metal band. They sign as first metal band a deal with
a major company, Elektra. Other record companies see the success and try to
find their own Metallica. They tour again through Europe, with Tank as support
act, play at the Monsters of Rock in Castle Donington and at the Day on Green
festival in Oakland. Afterwards, they go again to Copenhage, Denmark to record
the third album: "Master of Puppets". This album is released in march of 1986
and is a perfection of the harmonic line, that they started with "Ride the
Lightning". Halfway the tour with Ozzy, the record is gold already. During the
tour, James breaks his wrist on his skateboard, he'll do this again a year
later. More serious is the accident during the English tour of Metallica with
Anthrax: on september 26 of 1986 the bus gets off the road and bassplayer Cliff
Burton is killed in the accident. But two months later, the band is touring
again with the new bassplayer Jason Newsted, coming from Flotsam & Jetsam. They
play again at some big European festivals: the Dutch (!) Aardschokdag
(earthquake shock-day) and again the Monsters of Rock-festival. they also
release "The $5.98 EP Garage Days Revisited", an EP with five covers of songs
that have influenced the band. After this, the band starts working on the
fourth album "... and Justice for All". Because of the 65 minutes long playtime
of this record it becomes a double LP. Nevertheless the album is a bit weak,
compared to the previous ones. In the autumn of '88 the band starts it's
biggest world tour so far, with Queensryche as support act. Metallica is one of
the most important heavy metal bands of the eighties. They gave metal a new
direction and an impulse to other bands. Because of their success, they also
got the major record labels interested in heavy metal, resulting in many
contracts for many bands.