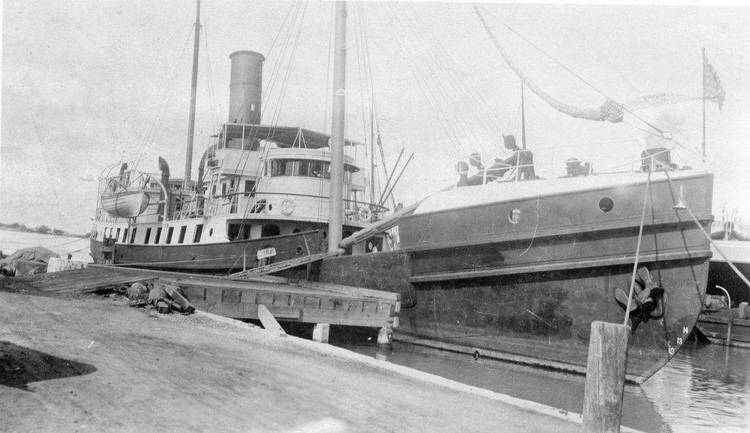 Contents of the PEARL.DOC file

This is basically a game in which you are attempting to shoot down the
Japanese carrier planes attacking the US fleet anchored in Pearl Harbor
(Harbour) on December the 7th 1942 with an anti aircraft gun.

Although it is meant as a game,it is in fact a real time simulation.
The air speed of the planes is 150 metres/sec and that of the shells 1000 m/s.
The shells and bombs follow correct gravitational trajectories.
The position of all the objects which comprise up to 7 planes,
10 shells and 3 bombs is evaluated every 0.25 second, and the screen
is updated every 0.5 seconds. All these objects and the scenery appear
to move relative to the gun sight as the gun is moved. Objects appear
as they would to a gunner staring down the sight. The program has a
mechanism for maintaining the correct pace for those with faster PCs.

As a player's score increases the frequency of planes will increase and the
direction of the attacks will diversify. A ship is sunk if the bombs land
within 85 metres longitudinally and 30 metres horizontally of its central
coordinates. Planes are hit if a shell comes within 30 metres vertically,
65 metres horizontally and 200 metres longitudinally.

As ships are sunk their coordinates are transferred to the gun implacement
which brings the gun under increasing probability of attack.
For every 15 planes shot down the player has the number of times out of the
remaining targets that the gun is targeted reduced by 1. The score and the
potential targeting of the gun are shown at the top of the screen.

The game ends when the gun position is bombed out.
The objective is to shoot down as many planes as possible.

Method of play is to shoot at the planes when they appear in the gun sight
which is always located in the centre (center) of the screen. When the
planes are distant allow for shell trajectory, when they are near aim
in front of of their direction of travel. The gun may be moved through
34 degrees either side of centre and from 5 to 45 degrees vertically.

The gun is controlled either by a joystick, mouse, or from the keyboard;
as detailed by the game on start up. In my experience the mouse gives
the best control and the keyboard the worst. In addition to moving and
firing the gun, pressing caps-lock will display the gun bearing and
elevation on the screen, T will T{emporarily} stop a game and X will
stop the game completely.


For those using the key board a few tips:-

It is better the keep the cursor keys depressed rather than to
stab at them.

Don't forget to use the Home, PgUp, End & Pg.Dn keys to move both
axes simultaneously.

The cursor keys will move the gun 1 degree, if the num lock key
has been pressed then 3 degrees, if scroll-lock has been pressed
then 7 degrees; if both have been pressed 9 degrees of movement
will occur. These multiplications are cancelled by pressing the same
key again, and these toggle keys are signalled on the top left of
the screen.

The gun fires when the Left hand shift key is held down. If you are
moving the gun and want to begin firing release the cursor keys for
a moment while you start to hold down the shift.

As mentioned by the terminal message an enhanced version of the game can
be obtained by sending US$15 to my wife: Virginia Dore, PO Box 70371,
Kowloon Central Post Office, HONG KONG. M C Dore 1987.