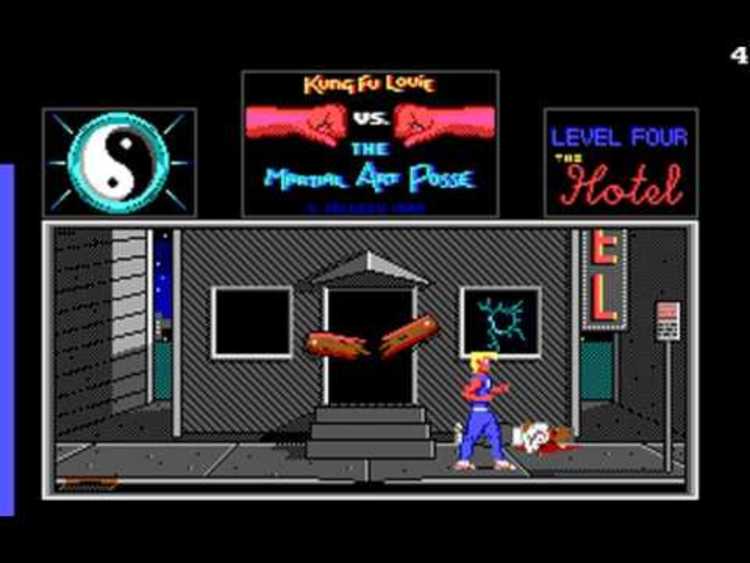 Contents of the KUNGFU.DOC file

INTRODUCTION
In the history of the New York City brawls, groups of
vigilantes, gangbangers, and renegades, otherwise known as
ruthless streetfighters, stormed the neighborhoods. Through
constant battles and rumbles, the leaders arose, bringing a
new breed of mayhem to the streets.
Karate, kung fu, tae kwon do, shinobi-jutsu/ninjutsu,
and all other martial arts quickly became influenced with
the "art" of streetfighting. Soon, corrupted masters and
students began to take control of the streets.
Arthur, a villainous karateka, was the most feared
leader of all New York City. Rumors tell us that he was the
only survivor of the "Get You Suckas" Brawl that took place
about three years ago. As that survivor of an almost-
defeated streetgang, he was jumped by approximately 30
mostly-armed members of the opposing gangs. He took on and
defeated all 30 opponents... with only his "panther-strike"
hands and lightning-quick feet. Soon after, many members of
all other groups deserted their gangs and friends to join
Arthur, aka "Martial Art." Thus, this new band of renegades
and vigilantes becomes "The Martial Art Posse."

THE STORY
June, 1979. Miyakonojo, on the southern island of
Kyushu, Japan. The day was hot and humid, with a tinge of
rain near the tip of the legendary mountain, Sobo Zan.
Louis kneeled in meditation. Tiny droplets of sweat
and blood dripped from his face and neck. This was the test
of the Fourth Level, the last test before becoming Master.


He has already fought and defeated 19 black-belt karatekas
continuously, and it is time for his last full-contact, one-
on-one battle.
Kneeling in attention near the back of the dojo was
Arthur. He has also completed his fight with the black-
belts. However, during his last confrontation, his opponent
was knocked down and out from one of Arthur's illegal attack
combinations.
"Arthur-san!" ordered the Master. "Prepare to fight
last battle. Between you two, we shall decide who will
reach Fourth Level. Set... Kiai!" A flurry of punches and
kicks were exchanged between Louis and Arthur. This was the
longest match displayed, with neither opponent backing down.
However, it seemed that Louis was winning the match. With
one good opening, Louis executed a beautiful spinning hook
kick to Arthur's head, sending Arthur down to his knees,
dazed and defeated on the canvas.
The match was over. Louis had won and achieved the
Fourth Level. Arthur, in disgrace, thought to himself,
"This is not the end, Louie. I'm going to be the master.
I'm gonna reach the Fourth and Final Level my own way.
Soon."
Ten years later, the Master, now old and weak, decides
to resign from his title. Louie, living in the United
States as a third-degree black belt, learns of this news and
rushes over to Japan to meet him. "I shall bring you back
to the States and take care of you there, Master," says
Louie.
Arthur, a Karate Master of his own style, dominates the
neighborhoods of New York City. He, too, discovers of his
Master's weakening. `Martial Art' exclaims to his students,
"Bring the old man to me. I shall soon be the Master of
Japan as well!"
Leaving the Master unguarded for a few moments, Martial
Art's students seize him from Louie's domain and bring him
to an unnamed, condemned hotel building. "Come and get him,
Kung Fu Louie! We'll see who's the real master now!"

WELCOME TO THE GAME
The story continues as you (Kung Fu Louie) enters the
park. From here, you will be faced with many different
opponents of the Martial Art Posse in many different
environments. Fight them hard and crazy with your hands
and feet to outdo each opponent and advanced from level to
level, until you come face-to-face with your ultimate
challenger, Martial Art.

LOADING THE PROGRAM
If you are running off the original disks, boot up your
computer with DOS in drive A or have it booted up from your
hard drive. Insert the INTRO DISK into the drive (use B: if
on a two-drive system, or A: if you have a hard drive). If
you are playing from a hard disk-installed copy, change the


current directory to wherever the game is located. Note:
DOS must be accessible at all times throughout the program.
At the DOS prompt, type KUNGFU. If you have an AdLib
Personal Computer Music Synthesizer Card, type KUNGFU /A.
KUNG FU LOUIE is obviously not copy-protected. If you
wish to duplicate the original disks, you can use the normal
DOS DISKCOPY command. If you wish to install it on your
hard drive, use the HINSTALL program included on-disk.

THE GAME SCREEN
There are four levels you must overcome before you
actually fight the Martial Art. Kung Fu Louie is on the
left side of the screen, as each opponent enters from the
right. The energy bars on the corresponding sides will show
how much damage each person can muster. If your bar
disappears, you are defeated, and the Martial Art Posse will
triumph. The number of opponents to encounter (shown on the
upper-right corner of the screen) vary from level to level.

CONTROLLING KUNG FU LOUIE
Kung Fu Louie has three (3) foot techniques and one (1)
hand technique. Try to build a strategy or pattern to fight
each style of each opponent with ease. Some attack
techniques are slower, but take a great deal of energy away
from the opponent, and vice versa. Use the "<" and ">" keys
to move Kung Fu Louie backward and forward, respectively.

ADDITIONAL PROGRAM CONTROLS
To quit from the game and exit to DOS, press "CONTROL"
and "Q" simultaneously. To pause the game, press "P."
Press any key when ready to continue and resume play.

GAME STRATEGY
You may notice that several combinations of movements
can render an opponent to their untimely demise. Also,
little hints and tips can make your challenge strong to meet
up with Martial Art himself on the last level of the game.
Follow these strategies...

1. Fight when you have to. Don't waste your energy or
restoration time by throwing unnecessary techniques. Energy
is restored after the defeat of an opponent and when the
player is not attacking. Each opponent knows NOT to come in
for an attack, so kicking continuously will not only keep
your energy low or the same, but raise your opponent's in
the meantime.

2. Time your technique combinations. As soon as you
see the enemy coming in or see an attack, counterattack with
a technique that will be too quick for him to avoid. This
way, you can stun him and give yourself a chance to finish
him off. For instance, if he is about to attack with a
slow, but painful spinning hook kick, move in and/or throw a
lightning-quick front punch to stop his sequence and daze
him. Then...POW!

3. Keep an eye on the energy bar. People tend to fight
wildly and not notice that they are on the virge of dying!
Watch his bar as well, and notice how much is subtracted
when a kick makes contact.


QUESTIONS AND ANSWERS
Where did you get the name `Kung Fu Louie' and `Martial
Art?' "R.J. (Raphael Salgado) frantically began searching
for a title for our game. Discussing with his partner in
Chemistry class, Louis Presta, he used Louis' name. `It
rhymed and had a nice ring to it. Kung Fu Louie.' The name
`Martial Art' was a great suggestion picked up one late
night by his cousin, Anthony Salgado. `Art - y'know, as in
Arthur? Maybe we should try Ninjut Sue or Shao Lynn next
time!'"
Who made the awesome tunes, dude? "We bought a few
AdLib Personal Computer Music Synthesizer Cards in the
beginning of 1989, and started to create lots of little
beats and rhythms. We thought everybody else with an AdLib
card could enjoy it as well...dude!"
Are there secret or hidden features? "If we told you,
then it wouldn't be a secret! Hey, don't /Curse at me!"
Why send KFL it into public domain? Your software's
good enough to make a movie from it! "Yeah, I know [laugh]
[wheeze] [guffaw], but I figured that since my public was so
good to us with the In the Aquarium program, I could trust
them with Kung Fu Louie. Besides, if the programmers are
stupid enough to put it out for public domain instead of the
big market, why can't others do the same? It was an idea to
go into marketing, but I am for `lower pricing' on marketed
software like others in the shareware/freeware world. Well,
until Kung Fu Louie II comes out..."
Who did the artwork? I'd like to pay him a few million
bucks. "Gee, thanks! R.J. did most of the title screen and
backgrounds for each level. Ren and Anthony (with the help
of Chris and Roger) drew in the characters. We had to ask
R.J.'s sister Roz (a black belt) to pose for every movement
they drew. Holding limbs out for 10 minutes usually strains
a person, y'know?"
Can I ask you a question? "You just did. Peace!"


ABOUT THE PROGRAMMER
Who is Raphael Salgado? "Who?" "Oh, him?!?" Raphael
Salgado, born May 14, 1973, began his career as a computer
programmer back in 1982 with the Tandy/Radio Shack TRS-80
Model I/III. In search for a more advanced computer system,
he upgraded to the IBM PC machines with one of the first PC-
AT systems in 1985. He continued to create software, and
soon contributed to the public domain and shareware
interests with great program hits, such as The Zero Hour,
Metal Mania, Instant Paradise, Prisoner of War, and world-
famous In the Aquarium. His interest and influence in the
martial arts began in March 1987 when he applied to the
Tiger Schulmann's Karate and Fitness Center, where he is now
a first-degree black belt. "I've always wanted to make a
karate-style game for my computer. Seeing that there are
only a few major martial art/karate arcade games for my
system, I wanted to add one more to `the library' that I
could have myself and others enjoy, plus say that I created
it." He will continue to create software for the public
domain (since it's no good, right?), but his great dream
lies in seeing his programs on display in stores (a.k.a.
`big-time marketing'). This graduate of Nyack Senior High
School in 1990 enjoys karate, basketball, swimming, art,
bicycling, weightlifting, flying my kite, girls, rap & house
music (as well as rock, wave, classical, and pop), unnatural
phenomenon (UFOs, Ouija boards, etc.), gory/horror movies,
and programming.

Watch out for the next release of the KUNG FU LOUIE series,
with a new story, game style and features, plus a full-
length, computerized movie sequence! Soon!

If you find this program enjoyable (can it be?), remember:
your contribution of $30 or more will be greatly
appreciated. Please make all checks payable to `R.
Salgado.' Wanna see others? Ask for a catalog, too. For
more information, please read the details on the opening
screen of the program. Thanks again!