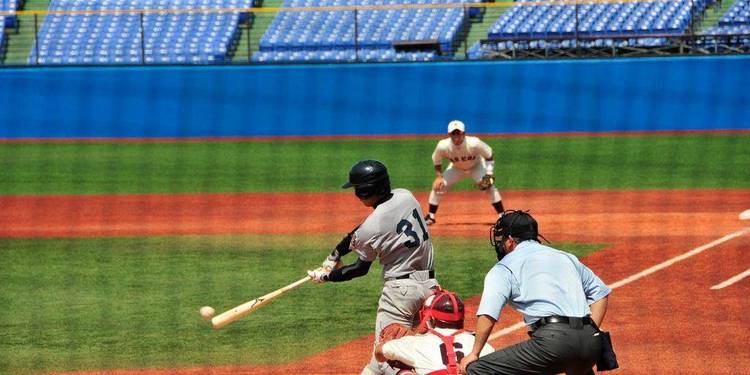 Contents of the DOC.TXT file

Digital League Baseball is a computerized baseball simulation game. The
concept behind DLB is simple. Players can play their favorite Major
League teams aganist each other while keeping all past statistics and
the teams win-loss records. DLB is in the same spirit as the older board
simulation games. DLB utilizes players statistics and probabilities
and uses a random number generator to choose the outcome from these
probabilities. For example, a batter with a .300 batting average initally
has a 30% chance of getting on base safely. This 30% is split amoung
his individual stats of singles,doubles,triples,strikeouts... Then these
numbers are modified depending upon the current pitcher's ERA and
his current strength as the game progresses.

As a manager of DLB you make all the strategic decisions: when to steal,
hit & run, pinch hit, bunt, substitute players, tag up on fly balls,
intentionally walk batters... All you have to do is register your personal
copy of DLB ( see REGISTRATION INFO ).

DLB is so easy to use you will learn its wide variety of options in a
matter of minutes. We are counting on this - if you have any comments
or questions about any aspect of DLB we ENCOURAGE your feedback!


DLB is being distributed and sold as a User Supported / Shareware
product. This means that our success hinges on satisfied users!!
Our expectation is that you'll enjoy the game, want to continue
playing and have the opportunity to see new & improved DLB versions. By
registering your copy of DLB, you are entitled to :

- one free future update, automatically provided to you
once you register your personal copy.

- Newsletters keeping you abreast of new developments and
sharing the ideas of DLB users across the country. The newsletter
also contains the algorithms used by DLB to determine results
from particular game situations.


By registering your personal copy of DLB you're contributing to it's
further development and have a say in the direction it takes. The
author has worked on DLB over the past 2 years in the hope that
there will be many enthusiastic DLB users. So if you really enjoy
playing DLB and want to see the ultimate computer baseball simulation
game develop before your eyes, REGISTER YOUR COPY!

We encourage users to make copies of the game to share with friends.
We do expect, however, that if you like it and want to receive
updates and other added values, that you contribute $$$ to the project
We are dedicated to making DLB THE BEST BASEBALL SIMULATION game
to be found.

DLB is probably one of the easist software programs you will ever use.
Every screen is accompanied by short documentation describing your

To begin a session of DIGITAL LEAGUE BASEBALL first type 'dlb' followed
by a carriage RETURN at your terminal.

After each game is played DLB will ask you if you want to save the game
to disk. If you type 'y' then the results of the game you just played
will appear on the standings for that division, thus allowing you to
distinguish the best teams from the worst.

After choosing the division you wish to play you will see that division
standings page. You should now pick the teams you wish to play aganist
each other by typing the number to the left of the team name. First
pick the home team, then the visiting team. Now you are ready to choose
the batting order for both teams.

The roster for the home team is displayed: players names,positions, and
other vital stats are organized by infield, outfield, and pitching staff.
Choose the order by typing the number at the left of the players name
followed by a carriage return. We do this once for each team. If you make
a mistake just retype the number of the last player chosen. After you
choose the lineup DLB will display your starters and subs with the question
"is this correct?". If you type 'n' you will start from scratch and
choose the lineup again.

The game is now ready to begin! The graphic images are drawn on the screen
as well as all the information you need to play. The upper left portion
of the screen is the playing field where all the action will take place.
The right hand side of the screen is reserved for the team that is
up to bat and the bottom right is reserved for defensive stats.
( SEE DIAGRAM ).

To use DLB is simple. The commands use the arrow keys ( located at RT.
of IBMPC keyboard) and the RETURN key. Hit the arrow keys to choose
the command you want, then hit the return key to execute that command.

The COMMANDS are :
a.) PIT - throw the pitch.
b.) OPTS - look at the options page. This is where you decide to
steal, hit & run, substitute,view player stats,warm up bullpen...
( see OPTIONS ).
c.) RPLY - instant replay. Sometimes the events in DLB happen so
quickly you want to see them again.
d.) quit - end this playing session.

The PITCHER STATS show a.) pitchers name b.) his earned run average
c.) number of strikeouts so far during this game (k) d.) number of
walks e.) number of hits given up f.) a strength rating - the higher
this number gets means your pitcher is getting weaker. You should
experiment with this number to see how it affects the game. Your skill
as a DLB manager partially rests with your ability to detect a weak
pitcher.

The OFFENSIVE STATS show the current baserunners and their stolen base
statistics. Use these to decide weather or not to steal, hit & run...
These stats are used on a "sliding" scale ie: a runner whose stolen base
stats are 1-2 ( one stolen base from two attempts ) will have a lower
probability of stealing than someone who is 15-30. The assumption is that
the faster runners usually attempt to steal more times than the slower
ones.

As a manager, DLB provides you with the following options:

( for more information on options and algorithms used by DLB
write to us at the address at the end of this file).

offense
-------
1. STEAL2 - Choose this option when you want to steal second base.
Steals are determined on a sliding scale based upon the
runners stolen base percentages ( for more information
write!)
2. STEAL3 - Steal third base. Keep in mind that stealing third is
more difficult to do than stealing second because the
catcher has less distance to throw.
3. HIT&RUN- Swing away while the runners attempt to steal.
4. BUNT - Bunt for base hit.
6. PINCH HIT - Change batters. If you want to pinch hit for the pitcher
there must be an active pitcher in the bullpen so you must
think ahead. Currently DLB will allow you to activate a
pitcher only from the defensive team.
7. VIEW STATS - Look at offensive players statistics. DLB will show the
stats in a "baseball card" format. Use the space bar
to see the entire team.

defense
-------
A. WALK BATTER - Intentionally walk the current batter.
B. BULLPEN - Either activate a pitcher or substitute
pitchers. Future implementations of DLB
will allow you to substitute pitchers only
after a certain time has elapsed for active
pitchers. Keep in mind that you cannot substitute
a pitcher unless he is first activated.
C. VIEW STATS - Look at the defensive teams statistics.

misc
----
X. SOUND ON/OFF - If the sound is "on" after each half inning
DLB will play the "rally" song. This command
is a toggle switch, hit it twice and it returns
to its original position.


As a registered owner of DLB you will recieve :

-The major league divisions of your choice.

-One free updated version of DLB.

-The opportunity to make your baseball ideas come alive!


To register your personal copy of DLB please include :

How did you hear about DLB?

THE BEST GAME IN TOWN!!