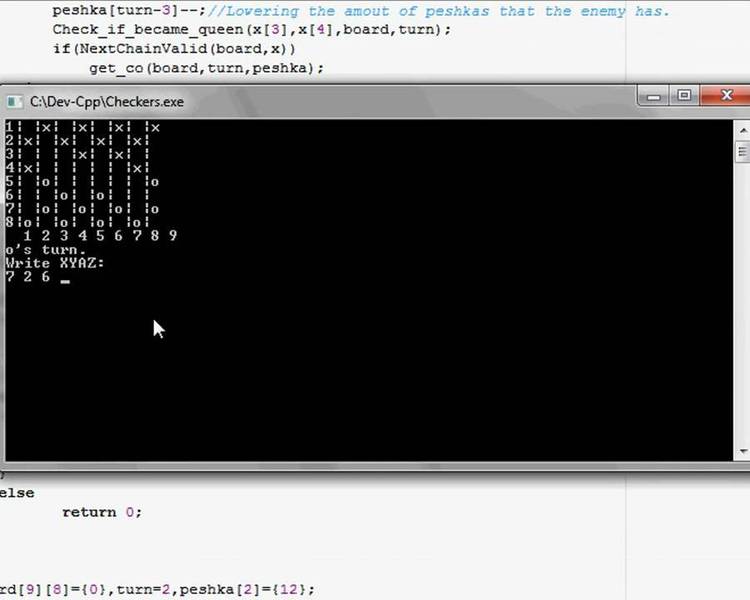 Contents of the INSTRUCT.TXT file

Rules of Play
-------------
jhghg hg hg ...
Each piece on the board can move one space at a time and in a forward
direction. When an opponents piece is on an adjacent square, a jump is
possible only if the next square behind the opponents piece is empty. If a
players piece has reached the last square on the opponents side, that piece
will become a king - meaning: that piece can move in any direction, but still
only one space at a time. When jumping, it is possible to jump several
players at once as long as your are moving in the appropriate direction that is
possible for that particular piece. These moves are called double, triple,
quadruple, etc... jumps. The entire object of the game is to clear all of your
opponents pieces off the board. When you have jumped the final, twelfth player
you have won the game.

When first loading up the game, you have four options: Play a new game (F2),
Load an old game (F3), New players (F5), or Quit the program (F5). If both
players are named '(none)' and you have selected the New game option then the
computer will ask you to enter Player 1's and 2's name. If F3 is pressed, the
computer will prompt you for the name of the file you wish to load. Then it
will immediately proceed to play the game. The Save game option (F4) can be
used any time during the program. The New players option (F5) can only be used
if a game is not in progress. This will allow you to change the names of
players 1 and 2. Enter the name 'computer' will allow you to play the computer
at a game of checkers. Pressing F10 will simply exit the program after asking
if you are certain you wish to quit.

During a game of checkers, the computer will display a flashing green cursor on
the current square it resides in. In the window at the bottom of the screen,
the computer will tell you whose turn it is. Player 1 is always red, and
player 2 is always black. To move the flashing cursor, use the arrow keys.
NUM-LOCK must be turned off. The diagonal arrow keys must be used as well.
Position the cursor on the piece you wish to move and press enter. The square
will become highlighted will a pinkish color. Then move the cursor to the
empty square you wish the selected piece to occupy and press enter. This
square will also become highlighted. To execute the movement of the piece, hit
the Move piece option (F1). In order to make a jump, first select the piece
you wish to move by pressing enter on its square - then postion the cursor on
the space that piece will end up at after the jump is made. To execute the
jump, press F1. If you wish to make a series of jumps, select the piece to
jump. Then move the cursor and press enter on every square the piece will jump
to in order. Do not press F1 until you are finished selecting every square the
piece will jump to. Then hit F1 and the piece will make its jumps and update
the information window.