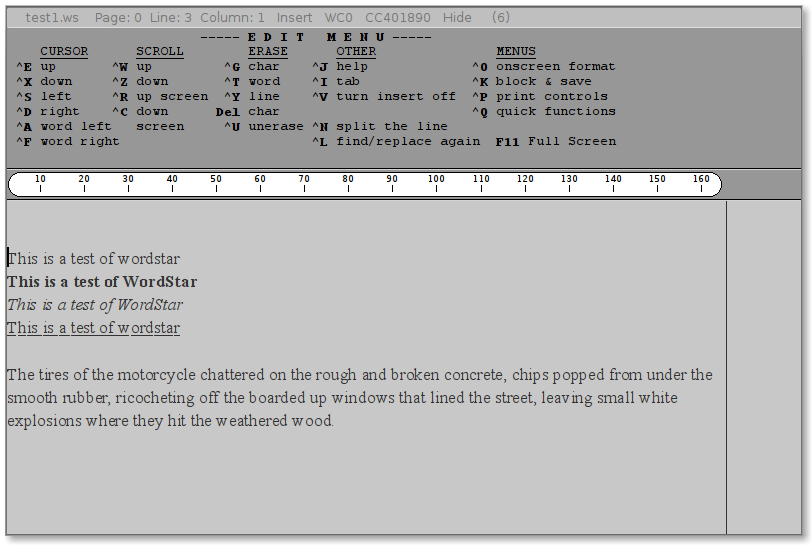 Contents of the XWORD.DOC file


(See the end of this file for registration information)

What You Should Have and What Is Required

There should be two files ARC'd together: XWORD.EXE and XWORD.DOC. The
only file that is essential to XWORD's operation is XWORD.EXE. XWORD
should work OK on any IBM PC (IBM PC-XT, IBM PC-AT, or close compatible,
such as the COMPAQ or AT&T 6300). XWORD.EXE requires about 80K bytes of
memory and will only work with DOS 2.xx or above. XWORD.EXE senses
whether the monitor is monochrome or color, but in either case writes
directly to the screen in the normal video mode. This file, XWORD.DOC,
should clarify some points of XWORD's operation. See the end of this
file for information about registration and copyright.

XWORD is a general file format transformer; that is, it converts files
from one format to another. Selections are made from two menus, "FORMAT
CONVERTERS" and "LOGICAL AND BIT OPTIONS."

I have made some arbitrary decisions regarding what XWORD does to files.
Sometimes it is not possible, or not possible without great difficulty,
to preserve print options between different word processing formats. In
some of these cases, I have elected to eliminate them and let the user
re-input them anew. For those word processors which require a line
length embedded in the files, I have chosen one arbitrarily, based on my
own experience.

XWORD appends a 1AH to the ends of files under certain options. Those
options that convert files to ASCII format all append a 1AH to the file.
This is not required for MS/PC-DOS, but it necessary in CP/M, to which
ASCII files can be ported.

A growing number of people are converting files from non-MS-DOS format
to MS-DOS format. Some of these files come from Apple or from dedicated
wordprocessors like the Wang or CPT. Even when these files are
converted into ASCII, frequently the conversion is not like that in the
MS-DOS environment in that the carriage return-line feed sequence is not
the same. Usually, instead of a CRLF, there is just a CR. Currently,
the ASCII to WordPerfect conversion of XWORD will handle either the CR
or CRLF format (you don't have to know which one you have). However, be
careful that when the file was converted in ASCII, other formatting
characters were not included which would make no sense (or have a
different meaning) in the MS-DOS format. For instance, the soft hyphen
in CPT format is, I believe, the same as the ">" character in MS-DOS
ASCII. You will have to weed out these characters in your file.

XWORD supports wildcards (* and ?) in the source file name. When
wildcards are used, XWORD will ask you to supply a target path or drive
different from that of the source files. If a drive is specified, it
must have the ":" after the drive letter. If a path is specified, it
must terminate with the subdirectory delimiter. For most users, this is
the backwards slash "\" but it can be other characters. Even though
XWORD should not overwrite source files, the user is STRONGLY ADVISED TO
MAKE ALL CONVERSIONS ON COPIES OF FILES ONLY, NEVER ON THE ORIGINALS.
Also NOTE THAT IF WILDCARDS ARE USED, FILES WHICH HAVE IDENTICAL NAMES
TO THE SOURCE FILES (BUT ARE ON DIFFERENT DIRECTORIES) WILL BE
OVERWRITTEN.

Use only with ASCII or WordStar-compatible files. DO NOT USE WITH
MULTIMATE FILES OR WITH WORDSTAR 2000 FILES. You will have to reboot if
you try to load a file processed with the P option into Multimate or
WordStar 2000.

No special precautions need be taken regarding these files. Both
WordStar and WordStar 2000 will allow any kind of file name. There is
still a problem with tab handling (by XWORD), but the rest of the
options of the two should be OK. XWORD will support WordStar 2000's
JUSTIFY.FRM, RAGGED.FRM, MEMO.FRM, and NORMAL.FRM. It will not support
the NOFORM.FRM. This format is identical to ASCII. Thus, if converting
a file produced with WordStar 2000 and NOFORM.FRM, select ASCII as the
source file format.

Sidekick is compatible with WordStar, BUT, the tabs of files written in
WordStar's non-document mode show up as capital "I"s in Sidekick. XWORD
expands expands these tabs so they will appear properly.

If your file in WordStar2000 looks funny when XWORD is through with it,
place the cursor at the beginning of the paragraph and press any letter
(you will have to erase the letter you input). This will cause
WordStar2000 to reformat the paragraph.

XWORD supports conversion into and out of MultiMate. When converting
from WordStar, be careful of indents. Make sure that indents begin
after a hard return or ^PM (equivalent to 0DH). MultiMate requires all
document files have the extension .DOC; XWORD appends this extension to
MultiMate-target files. You will notice that the converted Multimate
file will often have more indents than it should. This is due to the
algorithm I used; a future version of XWORD will solve this problem. I
have used XWORD to convert files longer than 70K to MultiMate with no
problems. Converting into MultiMate with wildcards is the only instance
in which wildcard use does not result in the original files being
overwritten, unless they, too, have a .DOC extension. When converting
OUT of MultiMate, it is strongly advised that you repaginate your
document before converting. This is because MultiMate does not
necessarily store the different "pages" in the same order they appear on
the screen. Page 12, for instance, may not necessarily be after Page
11. (This will have no effect on using the file in MultiMate.) This
may occur if a file is very heavily edited. Repagination helps reduce
this problem. (But, in any case, when you convert out of MultiMate its
best to check and see that the file is all there and in the right order.
If it is not, there will be a large chunk out of order, not just a word
or two.)

No special precautions need be taken here, as XyWrite II is very friendly.
(XWORD has been tested on Version 1.00.)

No special precautions are needed regarding conversion to or from
WordPerfect. If you want to convert from MultiMate to WordPerfect, you
might be better served by using WordPerfect's own conversion program.

The options on this menu are for bit and byte manipulation. Some of them can
be used for a quick and dirty type of cryptography. Three of the options
require the user to input a value in hexadecimal format (digits 0-9 and
letters A-F, which represent our common notion of 10, 11, 12, to 15); they
are: AND, OR, XOR. Another one, NOT, requires no other input from the user
than the source and target file names. ROL and ROR require the user supply a
number between 1 and 7, inclusive.

The action of NOT, ROL and ROR are fully reversable. That is, if NOT
FileA produces FileB, and NOT FileB produces FileC, then FileC is
identical to FileA. ROR (ROtate through Right) and ROL (ROtate through
Left) circulate the eight bits that compose each byte. ROR 1 time
shifts the bits in each bit right once; the rightmost bit is moved to
the leftmost position (this information is merely for the elucidation of
the user; the user does not have to understand the action of these
options in order to use them). ROL 1 acts in the same way, but to the
left. ROR 2 is the same as ROR 1 and then ROR 1 again. If FileA is
processed with ROR 3, say, producing FileB, and FileB is processed using
ROL 3, producing FileC, then FileC is identical to FileA. You can use a
sequence of these options to scramble a file pretty well (but remember
to record your sequence and go through it in reverse to unscramble it).
That is, if your sequence was:

then to undo this, you must go:

The last option on this menu, Replace, is different from the others.
Replace allows the user to replace any text (ASCII) or hexadecimal
string (a string is a sequence of bytes) by any other text or
hexadecimal string. The two strings do not have to both be ASCII or
hex. Additionally, the user can elect to save these strings and reuse
them (especially useful if they were complicated to figure out). The
user will be prompted for a source file and then a target file; then,
whether the string is to be entered in ASCII, hex, or from a previously
saved file. If the user enters a string in ASCII or hex, XWORD will ask
if the user wants to save the string. This sequence is repeated for the
replacement (new) string. Each string can be 30 bytes (characters)
long. When entering hex, note that each hex digit must be composed of
two numerals (including letters). Thus, the string more commonly
written as 0DH,0AH,27H,64H,0FFH, would be enterd as 0D0A2764FF.

Remember that if you Replace a commonly occurring byte in a file with a long
string, then your target file could become up to 30 times as large as the
original file.

If you make an error during hex entry, hit the backspace key, and you will be
reset to the beginning of hex entry. Generally in XWORD, hitting the space
bar, return, or end key lets you escape from one level of the program to
another, and, except when files are actually being converted, control-C
always works.

XWORD is the property of Ronald Gans; XWORD is unpublished and
copyrighted. XWORD may not be sold for profit by anyone. If you
purchased XWORD for more than the price of a disk, shipping, and
handling, you got taken and should notify me of that fact, along with
the name of the person or corporation from whom you purchased XWORD.
XWORD.ARC, XWORD.EXE and XWORD.DOC may be freely copied and
distributed, BUT ONLY AS LONG AS THEY ARE NOT ALTERED IN ANY WAY BY
REVERSE PROGRAMMING OR EDITING; IF XWORD.EXE IS DISTRIBUTED IT MUST BE
ACCOMPANIED BY XWORD.DOC. None of these programs may be altered in any
way by anyone. No warranty is made or implied about the functioning of
XWORD on any given system or computer configuration. Ronald Gans is not
responsible for any damage which may result from the using of XWORD on
any computer. Having said that, I will also state that I have tested
XWORD on a variety of computer configurations (all IBM PC compatible)
and found XWORD to run without damage to these systesm. If you wish an
alternate version of XWORD, please let me know. Please direct all
correspondence to:

"I" option from Menu One of XWORD.EXE will print out an invoice on your
printer (assuming you have a printer and it is connected to your
computer). If you wish to register your copy of XWORD, please fill out
and mail the invoice form back to me at the above address along with
$20.00 (N.Y.S. residents please add 8 1/4% sales tax for $21.65). If
you register, you are entitled to free upgrades for one year (there have
been many revisions of XWORD since it was first released and I am
continually working on it). Additionally, if you wish to continue
receiving upgrades after one year, an additional year will cost only
$8.00. Planned enhancements for XWORD include, of course, more word
processing formats (VolksWriter, DCA, among others), greater depth to
the formats currently supported, along with a greatly enhanced replace
function allowing for "intelligent" replacement.