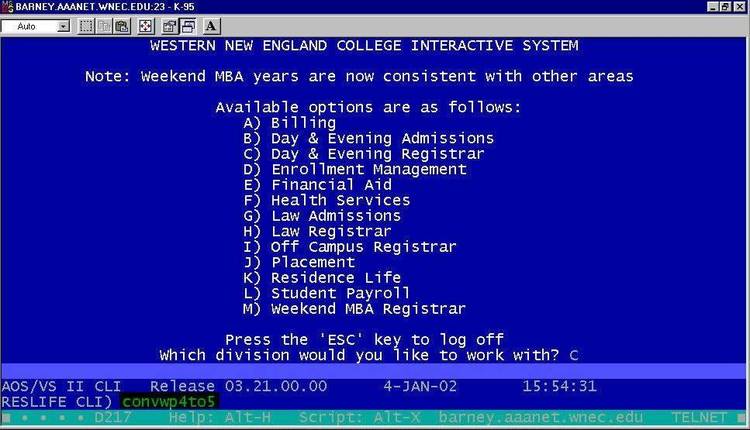 Contents of the MACMEN.DOC file

The macro menu included in this .ARC file is a generalized template that you must customize
for your own use. The macro is structured so as to minimize the work involved in this
customization process and allow an individual with limited knowledge of the WP5.0 macro
language to make use of it.

hDhh
This section lists the available macros as well as a short description of each macro.
It accepts user input consisting of a single keystroke. If the key pressed is the
F1 key the macro terminates with no action having been taken. Otherwise, the
keystroke is placed into Variable 1!

hDhh
This is the traffic director. Based on the value contained in Variable 1 it will
branch to the appropriate {LABEL}. Note that for those items whose designator
is an alphabetic letter, i.e., macroA, macroB, and macroC, the {CASE CALL}
recognizes both upper and lower case entries by the user.!

hDhh
This section contains the various {LABEL}'s. Each {LABEL} is a subroutine
whose function is to run a named macro. !

hDFor each macro you install you need to modify all three areas. !D

D1)h
The modification to the menu area is fairly simple. Just replace the dummy items
(i.e., the macro1, macro2, etc.) with the names of your macros, and add a short
description, which will be sufficient to remind you of what the macro does,
between the colons. You may need to adjust the spacing for macro names that
are longer or shorter than 6 characters if you want to keep the neatness and
symmetry of the menu. If you need to add more macros, just follow the indicated
format. The {^]} and {^\} character turn bold on and off respectively. The are
produced by simply holding down the Ctrl key and pressing the ] and \ keys
respectively.!


D2)h
The modification to the {CASE CALL} area is also fairly simple. For the sake
of clarity, I use the name of the macro as the {LABEL}. For example, if I were
installing a macro called ENV as choice A, I would change macroA to ENV in
both places it appears in the {CASE CALL} statement. When adding new
alphabetic choices be sure to allow for both upper and lower case values.!


D3)h
The {LABEL} section is the one most likely to cause difficulties, although it is
still fairly simple. In most cases you simply need to put the name of the macro
between the {MACRO} and {RETURN} commands. It gets a little trickier when
your macro invokes a WP menu, file list, or anything where you will need to
respond to a regular WP screen. In that case you also need to clear the screen
and turn on the display. An example of this is contained in the macro4 label. !

hDThe macro editor has some size limitations which will probably prevent you from being able
to have more than about 30 macros on the menu. The largest macro file I have been able
to create with the editor has been 3709 bytes. The symptom of this problem is that the
macro editor will just stop responding to your keystrokes except for the delete key and the
backspace key. If you delete a character you can then add a character. Note that this
is a limitation of the macro editor and not macros in general. Reportedly there will be
a forthcoming upgrade to the macro editor in WP LIBRARY which will allow larger macro
files.!D

hDIf the size limitation is cramping you, you can reorganize the menu into two macros; one
which draws the menu and chains to the second, which does the case call and the actual
macro execution.!D

hDIf the number of named macros you use is ten or less you can make a more elegant menu
system. You can have a single column (which allows longer descriptions) in which each
choice is assigned a number (0 through 9). You also bold the first letter (or another letter
if there is more than one macro beginning with the same letter). The user can then select
his desired macro by typing either the number or the bolded letter. Of course, in order
to implement this you need to modify the arguments of the {CASE CALL} statement. For
example if choice number 1 is called ENV then the corresponding {CASE CALL} argument
would be:!D

hDThis type of menu system can be used for many purposes other than invoking named
macros. The two macros included in this .ARC file called FONT and TAB are two
examples of how this can be used. By the way, you can use the macro menu to invoke
TAB and FONT without having to use the extra commands in the macro4 {LABEL}.!D

Any questions or comments on this menuing system can be directed to Rich Bednarski, PPN
76267,511.