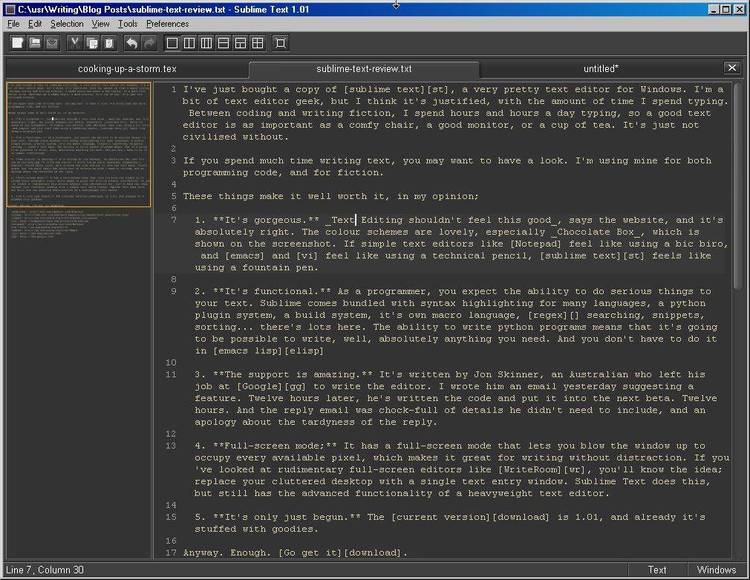 Contents of the AHED.TXT file

Fast vertical scrolling, without the jumbled effect that
occurred in earlier versions

AHED is a full-screen editor written for in-house use at the
Advanced Computational Methods Center. It requires an IBM PC or
close compatible with DOS 2.0 or higher and at least 256K of
RAM. Its features include the following:

Distributed free of charge as a single 64K file

AHED is a file editor, not a complete word processor. It has no
facilities for sending files to the printer or producing special
printed effects, such as underlining and boldface. However, AHED
can be combined with a formatting program such as Academic
Formatter (also available from ACMC), PR (in PC-WRITE), or
SCRIPT/PC to produce a complete word processing system.

AHED was written by Michael Covington using the Turbo Pascal
Editor Toolbox. The object code (AHED.COM) and documentation
(AHED.TXT) are copyrighted, but anyone is welcome to distribute
them to others as long as no charge is made beyond the cost of
duplication. The source code can only be distributed to licensed
users of the Turbo Pascal Editor Toolbox.

using the name of the file you want to create or edit.

For immediate on-screen help while using AHED, press F1. This
gets you into a menu system that tells you what keystroke
sequence performs each function. Exit from the menus by pressing
the keystroke sequence that you want to execute. If you want to
exit from a menu without doing anything, press Alt-A.

The menus use a shorthand notation for keystrokes, thus:

@X means to hold down Alt while typing X;

^X means to hold down Ctrl while typing X; and

The main advantages of AHED over the IBM Personal Editor (version
1) are:

-- AHED can refer to files by pathname.

-- AHED is completely self-contained and does not require
configuration or help files. In place of PE.EXE, PE.PRO, and
PE.HLP, you have only AHED.COM.

-- There are many new features such as line centering (^O^C) and
multiple-window editing.

-- Margins are automatically different for program files than
for text (see below).

-- Paragraphs do not have to be separated by blank lines.
Indented lines are recognized as marking the beginning of a
paragraph.

Some of the PE key definitions (such as Alt-U, "unmark") are not
supported in AHED. Pressing an undefined key does no harm.

Also, an annoying habit of PE has been removed. When PE rewraps a
paragraph, it always places two spaces after every period, even
if the period does not mark the end of a sentence. AHED leaves
only one space between words regardless of punctuation. This is
slightly at odds with traditional typing practice, but it
produces results that look good with most computer printers,
especially when proportional spacing is used.

In AHED, marked blocks consist of sequences of lines. That is,
marking always begins at the beginning of a line and continues to
the end of the next line. Alt-L, Alt-C, and Alt-B all have the
same effect, which is to mark the beginning of the block the
first time they are pressed and the end of the block the second
time. This can cause some confusion if you inadvertently press
one of these keys one time too many.

In the upper right corner of the screen AHED may display one or
more of the following indicators:

AI -- Autoindent mode is on. When you press Return, the
cursor will be positioned under the first nonblank
character of the preceding line. This is convenient
for editing programs that have varying levels of
indentation. Turn Autoindent on or off with ^Q^I.

INS -- Insert mode is on. This means that, when you type
in the middle of a line, subsequent characters are
pushed to the right to make room for what you are
typing. Turn insert mode on or off with Ins key.

WW -- Word wrap is on. If you try to type past the right
margin, the line will be split between words and a
new line will be started automatically. Turn word
wrap on or off with ^O^W.

Files whose names end in .TXT are considered to be text; AHED
starts out with left and right margins of 1 and 65 respectively,
word wrap on, and autoindent off. Other files are considered to
be programs, and AHED starts with margins of 1 and 255, word
wrap off, and autoindent mode on. All of these parameters can be
changed for the duration of an editing session, but they will
start out with their default values again at the beginning of
the next session.

The left margin determines where each line begins. It is almost
always 1, but you can reset it with ^O^L. If you are creating a
file to be printed with Academic Formatter or another formatting
program, DO NOT use AHED's left margin feature to establish the
margins in your printed text; use Academic Formatter commands
instead. Formatting programs almost always expect your text to
begin in line 1. Likewise, if you change the right margin (and
hence the line length), make sure your formatting program knows
about it.

To rewrap a paragraph, place the cursor on the first line of the
paragraph and press ^B or @P. AHED will find the end of the
paragraph by looking for a line whose first character is a
letter, a digit, or a punctuation mark that can occur at the
beginning of a line in normal text, and whose left margin (if
any) is all blank. Thus, a blank line, dot command, or indented
line will terminate the paragraph.

You can split the screen into more than one window in order to
edit multiple files, or even look at multiple positions in the
same file at the same time. Do this by pressing ^O^O.

Once you have created a window, you can load a file into it with
^K^R, or link it to another window with ^O^J. When two windows
are linked, they display the same file, and any changes typed
into one of them will immediately appear in the other if the
same part of the file is being displayed.

There is only one marked block at any time; you can copy or move
it from one window to another and hence from one file to another.