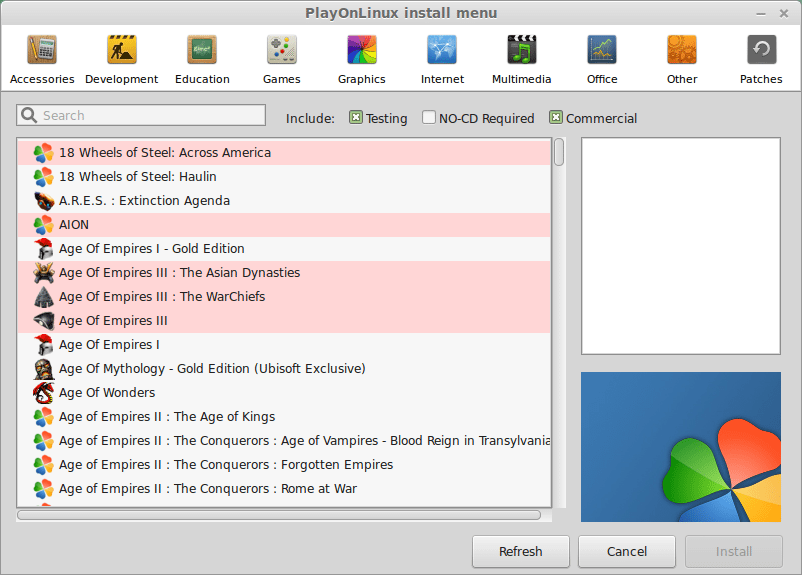 Contents of the HORSE.WRI file

Horse.exe draws a Galloping Horse in a small window. It be can left running constantly without putting a strain on the system, so it can be used as a desktop decoration. The window cannot be resized. If the window is minimized, a truncated version of the horse continues to gallop in an icon sized box.

It is intended to be used as a desktop decoration, to be loaded from the RUN= line of your WIN.INI file. If you move the window, it's location is saved in you WIN.INI file, so the next time it's run, it was startup in that same location. In other words, move it to a location you like, (I use the lower right corner), and from then on, it will always be drawn there.

You can load several instances of Horse.exe at once, and each new one will come up in a different color. The location stored in the Win.Ini file is used only for the first instance. Secondary Instances are displayed at the default locations.

Windows programmer might find the way the motion is handled interesting. As originally written it used PeekMessage(), to use free moments in the system to move the horse. However, on my 386/20 system this had him galloping far too fast. So, I instead used a timer. The horse takes one step 10 times a second. But one is only allowed to have 16 timers going at once, and a lot of other apps also use the clock, so if the request for a timer fails, it "falls-back" to the PeekMessage() method. It will only do this if you already have 16 apps, each of which is using a timer, going at once , so there's enough of a strain on the system for the horse moves at the proper speed. CUTE TRICK-- Start up 16 copies of Horse. After a few seconds of admiring the stampeed on your screen, start closing the windows, starting with the FIRST one, leaving the 16th for last. As each window closes, the 16th gets faster & faster.

The Bitmaps used to create the horse had an interesting history. I got them from the GW-Basic program Horse.Bas, by Paul Somerson, which appeared in his book "PC Magazine's DOS Power Tools". HE says he got them from the book "Computer Animation Primer" by David Fox and Mitchell Waite, and that THEY based it on the stop-action photos of a horse made by Eadweard Muybridge in the 1800's.

Horse was designed mainly in response to the Horse.tbk ToolBook file, which comes with the developers edition of Toolbook. Differences: This program is smaller, faster, in color, and doesn't chew up all of your systems resources. In that one, the horse has a rider, and your computer comes to a virtual dead stop while it runs. You be the judge.
-------------------------------------------------------------------------
YinYang.exe draws a symbol, part yin-yang, part floppy-disk and prints a Kaon from the book "The Zen of Programming" by Geoffery James. It not very exciting, but it looks cute. It has an interesting history also. The original DOS version of this was written by a friend of mine, Paul Mershon. It was VGA specific. I only have an EGA at home, so I couldn't run it. But since he had included the source code, I just converted to into a Windows program. By adding THREE lines to the graphics drawing routine, I was able to make this device indepentant version, making Windows adapt the coordinate system automatically to the limits of the hardware. By the way, the original was 28K long, this one's only 8K, despite it's extra abilities! Another interesting note: When iconized Yin-Yang (like Horse) executes the same drawing routines as it does when it drawing a full-size window, so it puts the same image in the icon. (Note: on an EGA or small display, you may have to maximize the window to read the text).

These (copyrighted) programs are offered free to the public, in hopes of making everyone's computer a nicer place to visit.