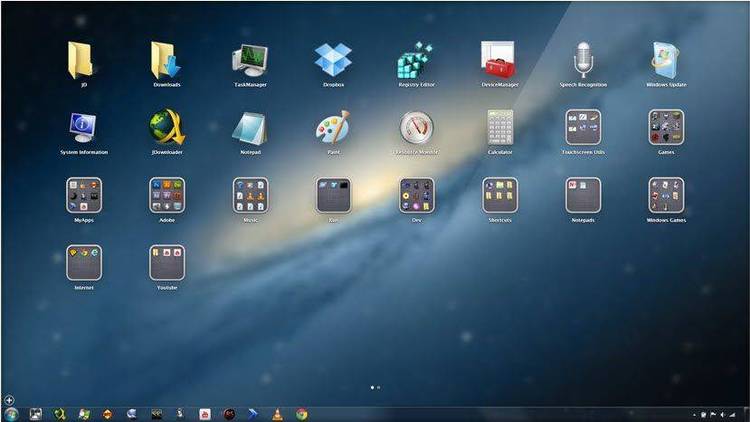 WINDOCK v1.4, a simple but useful program
launcher for Windows 3.1. Drag an icon
from the file manager to the "dock", and
presto -- you've got a button to launch the
program. WinDock remembers the layout
of the dock, so no need to fuss with
configuration files. Major weakness is that
icons are not always descriptive enough.

Contents of the WINDOCK.WRI file

Intro
This is a little app I put together to try out the new drag-drop capabilities of Win3.1 and to provide a more convenient facility for launching applications. I've seen a couple of other versions of similar apps floating around, but they all require too much effort to get the apps you want to display - the thing is pretty much useless without drag-drop.

Setup
Just copy the drop.ini file to your windows directory, and put the executable somewhere.

What to do
- You can drag executable files from the File Manager to the dock to place them there (sorry, one at a time for now). This can be any executable file, or a data file that has been associated with a file. Data files display the icon of the associated executable initially, DOS apps display the DOS icon by default. Icons can be easily changed in the Application Options Dialog, accessible by clicking the right mouse button on the app icon in the dock.

- You can launch an app by double clicking on its icon. Launching behavior can also be modified by the Application Options Dialog. You can set any parameters you want your app to be launched with, you can set the default directory that the app starts up with, and you can set the "state" of the app (ie maximized/minimized/normal) through this dialog.
Some apps remember their own "last window state", this overrides windows API's and may provide some unexpected behavior when launching these apps. Experimentation will provide the best results.

- You can move apps around by dragging them with the left mouse button. If you drop an app on top of another one, WinDock will beep, and the app will pop back to where it came from.

- You can delete an app by dragging it off of the dock and letting it go. (If you drag off without releasing, you can drag back on again).

- You can drag the dock out of your way by dragging the Windows Logo button at the top of the dock.

- You can exit the dock by double clicking on the Windows Logo button.

- You can see the WinDock About box and change some general options by clicking the right mouse button on the Windows Logo button.

- You can change whether the dock is on the left or right side of the screen by setting the radio buttons in the About box.

- You can make the dock stay on top of all windows by setting the checkbox in the About box.

WinDock will automatically save its layout and options when you exit it, or exit windows.

Version 1.3
-Right-clicking on an empty spot on the dock won't crash it.
-Starting WinDock with an ini file that contains pointers to apps that don't exist won't crash it.
-Parameters can now be added to apps in the Application Options dialog.
-Better reporting of errors when an app can't be launched.
-Default directory of an app now defaults to the directory in which the app resides.

Version 1.4
-Using taskman to tile or cascade windows will now not effect WinDock
-WinDock can now be made the shell, and will exit windows properly. However, it will not yet automatically load the apps found in the progman startup group, or in the load= or run= lines in win.ini.
-Exiting WinDock will not crash on exit now, as it was on some systems.
-WinDock no longer redraws when you click or double click on it.

Bugs not yet Fixed
None that I know of. Please let me know if this version does not fix your problems.

Coming Soon
-Ability to align WinDock with Top and Bottom of screen
-Option to trap application Maximize messages, and force them to resize so that WinDock doesn't cover any part of the app when it is maximized.
-A Run... dialog that will allow commands to be run, and will remember the last x commands.
-Make DOS apps maintain their icons so that when they are minimized, they have the same icon as they had on the Dock. This is what Progman does now.
-The capability of specifying an app as a 'group', that will pop up a horizontal dock when clicked, and hide it either when clicked again, or when an app is chosen from the pop-up dock. This would look like the toolbar on CorelDraw. (Tell me what you think of this)

I've gotten some great feedback from people about improvements to WinDock, hopefully I'll be able to address all of them while still maintaining the programs simplicity. Keep them coming!

PLEASE LET ME KNOW IF YOU FIND BUGS IN THIS PROGRAM! I want to try and keep it as robust as possible, so I want stamp any bugs out as soon as they crop up.

I'm always looking for comments or suggestions for improving WinDock, so please forward these to me either at 73467,1453 on Compuserve, or at [email protected] on the internet. Or you can phone me at 514-848-9659 if neither of these means are suitable.

Sorry these docs are so poor, I've been spending so much time on the app that the docs have become secondary. It's quite a simple concept anyway, so hopefully most won't need the docs.