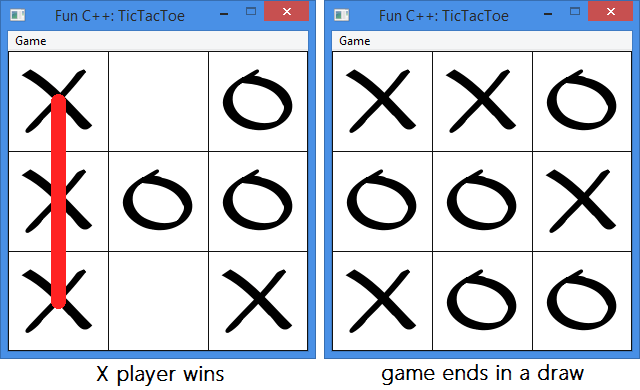 Contents of the TTT3D.TXT file

I hope you enjoy this little amusement.

If you've played Tic Tac Toe (you're from Earth, you have), then
TTT3D is very simple. Get four marbles in a row. Use the mouse to
select your square, the computer opponent will select a square, and
so on. Diagonal wins from level to level are sometimes the hardest
to see, and even on the easy difficulty setting, the computer (very,
very, almost) never misses a one move win. On the advanced setting,
the game is very difficult to win, but it CAN be done.

The menus are fairly self-explanatory, but for redundancy's sake,
I'll explain them again here:

Edit
Undo -- Restores position the game was in before
the previous HUMAN move. If the computer
is playing, this will take back CPU's last
move and yours. If two humans are playing
only one move is undone. The undo is
multiple level, you may undo all the way
back to the beginning of the game if you like.

Help
Hint-- The computer will tell you what IT would do.
In easy mode the hints will not be as smart
as advanced mode. The hint you get is the same
move the dumb/smart computer opponent would make.
If advanced mode seems unbeatable, select hint
repeatedly to play the computer against itself.
There may be a few draws, but eventually the
CPU will defeat itself. The key to defeating
the game in advanced mode is indirection --
wherever it is you want to go, make sure you
take the roundabout route.

That's really about it. The computer will declare a draw on it's move
if all the possible winning lines are blocked (i.e. contain both black and
white marbles). No such declaration is made in two human mode unless the
board is filled. To REGISTER this game send four measly American dollars
or a check for same to:

and you will recieve an advanced copy of the next (planned, beyond drawing
board, in production even as we read/write, but not done yet) High Street
Software Windowsware.

Future games will be more complex, colorful, and just as courteous.

TTT3D is OWNED and COPYRIGHTED by High Street Software.
If you use it for more than thirty days you are obligated to REGISTER it.
Feel free to distribute it as long as it is unmodified and accomanied by
this documentation.