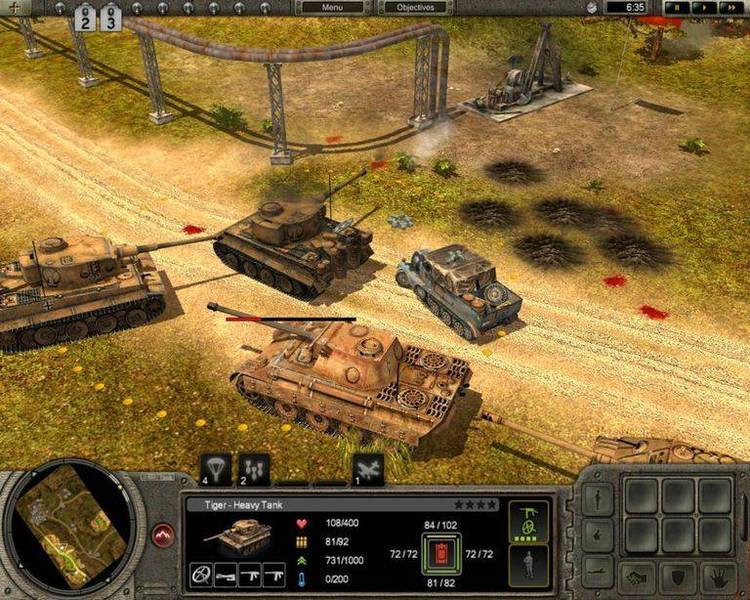 Panzerkrieg for Windows (PFW) is a two-player
tactical-level simulation of land combat in
the era of World War II. PFW requires two
players, Microsoft Windows 3.0, EGA or better
graphics, and a mouse. Ideally, two PCs are
used, connected together via a serial cable,
modems, or most LANs. Includes four
scenarios. Shareware.

Panzerkrieg for Windows (PFW) is a two-player
tactical-level simulation of land combat in
the era of World War II. PFW requires two
players, Microsoft Windows 3.0, EGA or better
graphics, and a mouse. Ideally, two PCs are
used, connected together via a serial cable,
modems, or most LANs. Includes four
scenarios. Shareware.

Panzerkrieg for Windows (PFW) is a two-player tactical-level simulation
of land combat in the era of World War II. Each player directs a number of
units of varying types and capabilities. The "winner" of the simulation is
the player who best accomplishes the victory conditions spelled out in the
scenario that is being run.

PFW is intended to be a two-player game with the two players taking
opposing sides in a contest of strategy and tactics. The game operates
under "hidden movement" rules which means that each player will be able
to see only those opposing pieces which are "visible" to their own playing
pieces. Whether or not an opposing piece is visible depends upon distance,
concealing terrain and whether or not there are any intervening blocks to
line of sight (LOS).

PFW runs under Microsoft Windows 3.0 or later and requires that Windows
be operating either in standard or 386 enhanced mode. PFW will not run
under Windows real mode. This means that the computer must have, as a
minimum, a 80286 CPU and one megabyte of memory. For best performance, the
computer should have an 80386SX CPU, or better, and two megabytes of memory.
In addition, PFW runs in 16 color mode and requires a minimum of EGA quality
graphics. It is preferable to run PFW using VGA graphics or better. PFW
also requires that you have a mouse or compatible pointing device.

PFW acts a referee between the opposing players. It resolves movement,
sighting and combat results; also, it allows the players to communicate with
each other via a simple messaging system. While PFW can be played on one
machine, it is best played between two machines using a communications link.
This communications link can be either a direct connection via a serial
cable, a Local Area Network that supports the NETBIOS protocol or a modem
using the commercial telephone system. The modem and NETBIOS options
allow you to play against other players who are located across town or
across the country.

PFW is a thinking game - it requires much thought and planning, and
provides no rewards for merely typing quickly. PFW games take time - an
average of 3 hours per game; however, you can stop a game at any
time, and continue it at a later date.

PFW really consists of 2 parts: the game driver and a number of
different scenarios. Each scenario actually is a complete game.

What is a scenario?

A PFW scenario is a description of a game to be played. You can think
of it as a specific "mission" to be accomplished. PFW includes a number
of scenarios, which really makes it a number of different games.

Each scenario contains three elements: a map, a list of forces
available to each side, and objectives to be accomplished by each player.
PFW then has a number of different flavors depending on the scenario you
choose.

Communications Between the Players

PFW is a game played between two people. Your computer is not your
opponent, but only a tool to handle the bookkeeping in the game. In a
complex game like PFW, a human player is a more skilled, creative
and interesting opponent than a computer can be.

Your computer and your opponent's computer must be able to
communicate with each other. The computers exchange information about:

- The position of your units and your opponent's units.

- Messages exchanged between you and your opponent.

There are several ways the two computers can communicate:

- Through a directly connected wire.

- Through phone lines with modems.

- Through a Local Area Network.

Two players can also use PFW by sharing one computer. To do this,
each player starts his own copy of PFW and chooses the "Via DDE on
this machine" communications options. The players then alternate
their use of the machine, each working in his own copy of PFW.

Each team in a scenario is assigned a group of units with which to
accomplish its mission. For the most part, these units represent weapons
and other equipment that generally were available during World War II.
Typically, each team commands 10 to 20 units.

Each of these units represents a platoon to company size entity.
One tank unit does not represent one tank, but rather a group of tanks.
One mortar unit is not one mortar, but a battery of mortars. This
distinction isn't very important in playing PFW, but it does give you a
better feel for the units you are commanding. When you set an ambush in
the woods with one of your tank units, it's not just one tank waiting to
blow the other guy away, it's an entire company of tanks!

Each scenario consists of 3 parts:

- A terrain map on which the scenario will be played.

- An order of battle (i.e. the roster of units
participating in the battle).

- A description of the scenario.

The map is a graphic representation of the terrain on which the
scenario will be played. Some maps are fairly simple, representing
mostly open, level terrain. Others can be considerably more
complex.

The order of battle is a list of units that each team will command.
This list also includes the location of each unit at the start of the
scenario (if its position is fixed), or the area of the map where the player
may deploy the unit.

The description of the scenario details the background of the
scenario setting, the goals of the two players, and victory conditions
which define the "winner" of the scenario.

Time
PFW is played in turns. During each turn, players give orders to
their units. Once they are finished giving these orders, PFW exchanges
information between the players, determines the results of any combat,
processes units that are moving, and does other checks. The results are
then made available to both players.

Each turn represents 20 seconds of game time. This doesn't mean
you have only 20 seconds to give your orders - you have as much time as
you need.

Some scenarios have specific time limits on them. These time limits
are also specified in terms of game time, not real time. If a scenario has
a time limit you have as long as you need to give your orders, but
these orders must accomplish the scenario objectives in a time-efficient
manner for you to be victorious.

One of the most important elements of a battle is information. Many
times the side with the weaker force has triumphed because they were better
informed than the enemy, and correctly used this advantage. As in any
well-designed computer based wargame, PFW provides the "fog of war" by using
a hidden movement system. In PFW, you only know about enemy units that you
can currently see. Or more specifically, you only know about enemy units
that can currently be seen by one or more of your units. There are four
elements that affect the ability of your units to see the enemy units:

- Not all of your units can report what they see to you. If a
tank of yours spots an enemy unit, you can be sure you'll
know about it pretty quickly. However, if your truck spots
an enemy unit, you probably won't know about it. The truck
doesn't have a radio, and so has no way of letting you know
what it has seen. In PFW, only combat units can report what
they see, and trucks and wagons are not considered to be
combat units. (If the truck was carrying an infantry unit,
however, the infantry could report what they see.)

- Visibility is limited by distance. Sometimes it's foggy,
sometimes it's clear. When enemy units are at the limit of
visibility, it's not possible to make them out exactly. You
see there's something there, but you can't make out what
kind of unit it is until it gets closer. Visibility
remains constant during a scenario.

- Visibility is limited by terrain. You can't see over high
hills, or through large towns or woods, for example.

- Some terrain types hide enemy units. For example, enemy
units can sit in towns or woods, and you won't know they're
there unless you get right next to them.

To win a PFW scenario, you have to destroy enemy units. To this end,
most of your units are equipped with weapons. Some are also equipped with
armor protection which (hopefully) helps prevent them from being destroyed.
The effectiveness of a weapon depends on the weapon's "type" (i.e. what kind
of projectile it fires) and whether or not the target has armor protection.
If the target is armored, then the shooting range also influences the
effectiveness of the fire.

There are two basic types of targets in PFW: Armored Units and
Unarmored Units. Armored units include tanks, tank destroyers, self-propelled
artillery, scout cars, and halftracks. Unarmored units include infantry
and cavalry, towed guns, trucks and wagons, and various specialized types
of units such as forward observers, guerrillas, and depots.

Most attacks are simple direct fire attacks. There are other ways in
which you can attack and damage enemy units. In fact, the most
effective way of attacking is to combine different forms of attack so as to
produce more damage than any simple attack could do alone.


Welcome to the Shareware copy of Panzerkrieg for Windows. The preceeding
text is an excerpt from the introduction of the PFW Manual. When you
register your copy of PFW, you'll receive a printed copy of this manual
which describes how PFW works, gives details on the 150+ different types
of units you may encounter in PFW, and contains a tactical primer to help
you effectively blow away your opponent.

You'll also receive an additional twelve scenarios not available for the
shareware version.

And finally, you'll receive the latest copy of the game with all enhancements
and bug fixes, as well as the most current version of the unit graphics
file.

Besides receiving all of these goodies, your registration will help
encourage us to continue to enhance PFW. Many user suggestions have
be incorporated into PFW today; there are many more yet to be done,
including a program to allow you to create your own scenarios.

Please include your name and address, along with the disk size your require.
Available sizes are: