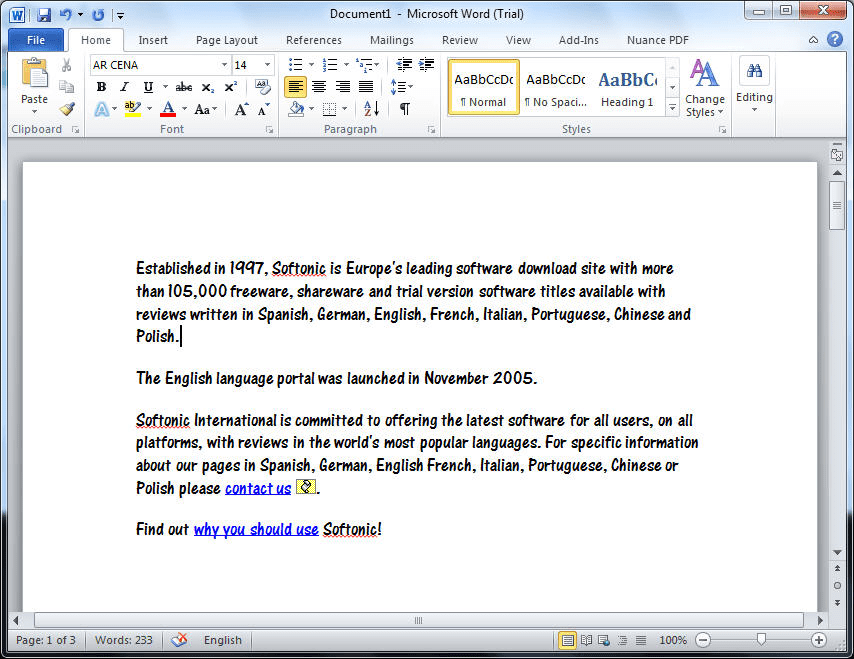 Contents of the EDICT.DOC file

The version date and sequence number is included in the dictionary itself under
the entry "EDICT". (Actually it is under the JIS-ASCII code "????". This keeps
it as the first entry when it is sorted.)

The master copy of EDICT is in the pub/Nihongo directory of
monu6.cc.monash.edu.au. There are other copies around, but they may not be as
up-to-date. The easy way to check if the version you have is the latest is from
the size/date.

EDICT is an attempt to produce a public domain Japanese/English Dictionary in
machine-readable form. It was intended initially for use with MOKE (Mark's Own
Kanji Editor) and related software such as JDIC and JREADER, however it has the
potential to be used in a large number of packages.

At present it is in the "public domain", however at some stage it may be placed
under Gnu or Copyleft protection, mainly to prevent the work of its many
contributors being exploited by commercial software developers.

EDICT is in the "EDICT" format used by MOKE. It uses EUC coding for kana and
kanji, however this can be converted to JIS or SJIS by any of the several
conversion programs around. It is a text file with one entry per line. The
format of entries is:

The English translations are deliberately brief, as the application of the
dictionary is expected to be primarily on-line look-ups, etc.

(a) the basic EDICT distributed with MOKE 2.0. This was compiled by MOKE's
author, Mark Edwards, with assistance from Spencer Green. Mark has very kindly
released this material to the public domain as part of EDICTJ. A number of
corrections have been made to the MOKE original, e.g. spelling mistakes, minor
mistranslations, etc. It also had a lot of duplications, which have been
removed. It contained about 1900 unique entries. Mark Edwards has also kindly
given permission for the vocabulary files developed for KG (Kanji Guess) to be
added to EDICT.

(b) additions by Jim Breen. I laboriously keyed in a ~2000 entry dictionary
used in my first year nihongo course at Swinburne Institute of Technology years
ago (I was given permission by the authors to do this). I then worked through
other vocabulary lists trying to make sure major entries were not omitted. This
task is continuing, although it has slowed down, and I suspect I will run out
of energy eventually. Apart from that, I have made a large number of additions
during normal MOKE and JREADER usage (e.g. using it to read fj.* news.)

(c) additions by others. Many people have contributed entries and corrections
to EDICT. I am forever on the lookout for sources of material, provided it is
genuinely available for use in the Public Domain. I am especially grateful to
Theresa Martin who has been supplying a lot of useful material, plus very
perceptive corrections. Hidekazu Tozaki has also been a great help with
tidying up a lot of awry entries, and helping me identify obscure kanji
compounds. A full list is at the back of this file. A massive group of
contributions came from Sony, where Rik Smoody had put together a large online
dictionary.

At this stage EDICT is approaching the size of a good commercial dictionary,
which typically has 20,000+ non-name entries with examples, etc. It is bigger
than some of the smaller printed dictionaries, and when used in conjunction
with a search-and-display program like JDIC or XJDIC it provides a highly
effective on-line dictionary service.

A word on copyright. Of course most of the material in EDICT came from other
published lists. Dictionary copyright is a difficult point, because clearly
the first lexicographer who published "inu means dog" could not claim a
copyright violation over all subsequent Japanese dictionaries. What makes each
dictionary unique (and copyrightable) is the particular selection of words, the
phrasing of the meanings, the presentation of the contents (a very important
point in the case of EDICT), and the means of publication. The advice I have
received from people who know about these things is that EDICT is just as much
a new dictionary as any others on the market. Readers may see an entry which
looks familiar, and say "Aha! That comes from the XYZ Jiten!". They may be
right, and they may be wrong. After all there aren't too many translations of
neko. Let me make one thing quite clear. NONE of this dictionary came from
commercial machine-readable dictionaries. I have a case of RSI in my right
elbow to prove it.

Please do not contribute entries to EDICT which have come directly from
copyrightable sources. It is hard to check these, and you may be jeopardizing
EDICT's PD status.

EDICT is actually a Japanese->English dictionary, although the words within it
can be selected in either language using appropriate software. (JDIC uses it to
provide both E->J and J->E functionality.)

The early stages of EDICT had size limitations due to its usage (MOKE scans it
sequentially and JDXGEN, which is JDIC's index generator, held it in RAM.) This
meant that examples of usage could not be included, and inclusion of phrases
was very limited. JDIC/JDXGEN can now handle a much larger dictionary, but the
compact format has continued.

No inflections of verbs or adjectives have been included, except in idiomatic
expressions. Similarly particles are handled as separate entries. Adverbs
formed from adjectives (-ku or ni) are generally not included. Verbs are, of
course, are in the plain or "dictionary" form.

In working on EDICT, bearing in mind I want to use it in MOKE and with JDIC, I
have had to come up with a solution to the problem of adjectival nouns
[keiyoudoushi] (e.g. kirei and kantan), nouns which can be used adjectivally
with the particle "no" and verbs formed by adding suru (e.g. benkyousuru). If
I put entries in edict with the "na" and "suru" included, MOKE will not find a
match when they are omitted or, the case of suru, inflected. What I have
decided to do is to put the basic noun into the dictionary and add "(vs)" where
it can be used to form a verb with suru, "(a-no)" for common "no" usage, and
"(an)" if it is an adjectival noun. Entries appear as:

Where necessary, verbs are marked with "(vi)" or "(vt)" according to whether
they are intransitive or transitive. (Work on this aspect is continuing.) I
have also used (id) to mark idiomatic expressions, (col) for colloquialisms,
(pol) for teineigo, etc.

Users intending to make submissions to EDICT should follow the following simple
rules:

o all verbs in plain form. The English must begin with "to ....". Add (vi) or
(vt) to the first translation if the nature of the verb is not implicit in the
translation(s).;

o indicate prefixes and suffixes by "(pref)" and "(suf)" in the first English
entry, not by using "-" in the kanji or kana.

o do not add definite or indefinite articles (e.g. "a", "an", "the", etc) to
English nouns unless they are necessary to distinguish the word from another
usage type or homonym.

o do not guess the kanji.

o if you are keying from a romaji form, make sure you have the correct kana for
"too/tou" and "zu", where the Hepburn romaji is often ambiguous.

o do not use kana or kanji in the "English" fields. Where it is necessary to
use a Japanese word, e.g. kanto, use romaji.

EDICT can be used as the dictionary within MOKE simply by renaming it "EDICT",
(or JTOE.DCT in the new version 2.1 of MOKE.) If you are a MOKE user and have
been adding to your EDICT using the "Ask English?" option, you may wish to
append your additions. Why not send them to me and I will add them to EDICT?

EDICT can be used, with acknowledgement, for any purpose whatever, EXCEPT for
inclusion in new commercial products. Mark Edwards can, of course, use it in
later MOKE releases. Stephen Chung may also be using it in his PD "JWP".

I will be delighted if people send me corrections, suggestions, and ESPECIALLY
additions. Before ripping in with a lot of suggestions, make sure you have the
latest version, as others may have already made the same comments.

The preferred format for submissions is a JIS, EUC or Shift-JIS file (uuencoded
for safety) containing replacement/new entries. Separate the amendments from
the new material: e.g.

I prefer not to get a "diff" or "patch" file as the master EDICT is under
continuous revision, and may have had quite a few changes since you got your
copy.

As some of the material in edict has been derived from entries in the
dictionaries of the "Wnn" project, it is appropriate to draw attention
to the copyright statement of that project.