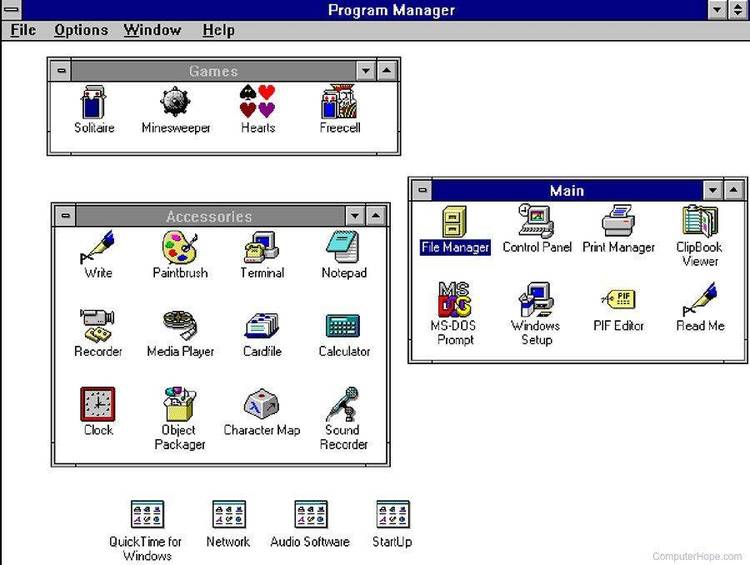 Contents of the ICONLIB.DOC file

(use word wrap to view this text)

* Note - You'll need the 49 .ICO icon files in MB2.ZIP for the installation demo shown below.

**If you have the first version of ICOMB1.ZIP (uploaded before I figured out the macros), substitute ICONLIB.DOC for the doc files included in that file.

The following is a system I've developed for managing a large collection of Windows 3.0 .ICO files using group windows and installation macros. I've found it useful and hope you will too.

In order to have a visual reference to the individual icon files, the system uses Program Manager group windows with up to 50 icons per group. By maximizing Program Manager, and then maximizing the group, you can see all 50 icons at once, or use the scroll bars in a smaller window. With the set of macros included here you can build your own icon library group windows with automatic installation of single icons or groups of 50 in a subdirectory. There are also two macros that automate changing the icon of a Dos program or WinApp in Program Manager - you'll never have to remember or type an icon filename.

I Setting up the IconLib MB1 group

To see all the icons at once, maximize Program Manager, then maximize the IconLib MB1 group (this will take a few seconds on slower machines).


Here's how the macros and the library window work together - you may want to install chkdsk.com or some other Dos app in group window as a test for the following demo:

Do the following with Program Manager sized as you normally use it.

To use one of the new icons for an application, open the IconLib1 group window, and scroll around to find an icon you want to use. Click on it once with the mouse so the name is highlited, then press "Ctrl A" on the keyboard.

Then open the group window with the application you'll use the icon for (chkdsk.com, for example), click on it once to highlite the name, and press "Ctrl B". That's all there is to it!

II Setting up library groups for your own icons

I'd suggest setting up a header subdirectory like \ICO, with subdirectories under that for groups of icons - \ICO\UTL, \ICO\GAMES, etc. but the system will work with any subdirectory setup as long as it's on the same drive as Windows. The group install macro will only install up to 50 icons since that's the Program Manager limit for a group.

Make sure the ICON.REC macro file is running with the recorder minimized as in the example above

Double-click on the subdirectory shown in the Directory tree window to open a file window for that subdirectory. Make sure there are no other file windows open or minimized, just the tree and the icon subdirectory window. Set the View menu option to "By Type" if it's not already set that way.

The rest is easy - to put icons into the new group window one at a time, just click once to highlight the .ICO file, and press "Ctrl 1"

To install a group of up to 50 icons, click once on the first .ICO file in the subdirectory (make sure they're arranged by file extension), and hit "Ctrl 5". Then go for coffee - it'll take a while depending on your cpu and disk speed.

If there are less than 50 icons in the subdirectory, just hit "Ctrl Break" to stop the macro after it installs the last one. If you don't abort the macro it'll just keep installing the last one over and over until the group window has 50 icons, but you can always go back and delete the duplicates in Program Manager.

You can also start the macro running from a highlited file in the middle of a huge subdirectory of icons and let it run up to 50 or abort it when you want - just make sure you start with a new, blank group window each time.

* Another way to install individual icons to a library window is just to hold down the mouse button and drag from an .ICO file in the File Manager window to the group window in Program Manager. You will have to do some window moving and sizing to have both windows visible at once for that to work. For me, the macro is easier.

* Note that some icons in ICOMB2.ZIP have names that may be the same as other .ICO files you have - like "email.ico" - so be careful when copying them so you don't overwrite any pre-existing icons.

* You can easily change the keys used to run the macros if they conflict with program shortcut keys or other macros - just change the field entry in "Macro / Properties / Shortcut Key" in the recorder.

I'm distributing this system under the Cheapware concept - it's a small, productive system that took me a while to figure out, develop macros for, and then document so others could use. If you try it and find the macros useful, please send a $10.00 check, payable to Mike Barrs, to the following address:


I'll also provide custom icons at a very reasonable fee to individual users or shareware authors that like the ones I've drawn here and need something special. Just leave me an e-mail message on Compuserve - Mike Barrs 72070,2434


And thanks to Philip Eskelin for the IconDraw editing program.