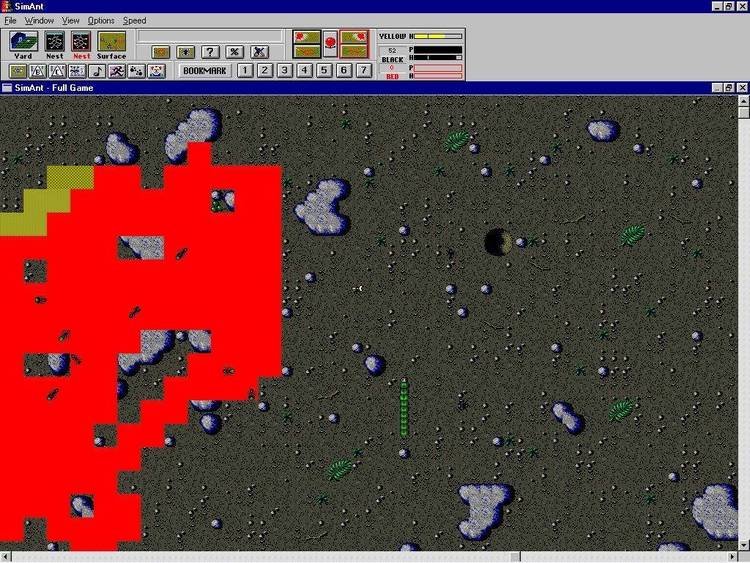 Contents of the ANTS.DOC file


This is just a little program I whipped up as the 1st in a series of
Animated Backgrounds for Windows. Basically you get a whole bunch of ants
crawling around on the desktop. The will go BEHIND all open windows and icon.
The ants will note go beyond the screen boudary. They will also run away from
any other ants they encounter.

Every once in awhile a slice of bread appears. I know; this is a really
crude looking slice of bread, but what can you expect for only 3 minutes at
the bitmap editor? The ants will be magically attracted to this. Who knows
why ants are attracted to bread? What a strange concept... When an ant "eats"
it the bread will dissapear and all the ants will go on their merry way.

1. When you close or move a window that an ant was behind the routine that
clears the ant each time it moves has stored the part of that window
that the ant was behind and subsequently deposites that on the screen.
I'm working on this one...
2. Sometimes the bread leaves portions of the screen behind also. If you
have any ideas on this before I release the next version please let
me know.

1. The next version will have a configuration dialog which will allow you to
modify the number of ants (this is fixed at 6 for now), the maximum and
minimum speed, the percent chance that a piece of bread will appear, and
anything else I put in.
2. The guys at work are really full of ideas for this: There could be a "Black
Hole" (like the trashcan one on the NEXT) that appears every so often that
sucks up the ants.
3. You will be able to change the cursor into a can of bug spray with which you
can spray an ant. It will die and fall to the "ground" (bottom of the
screen).
4. I might put in a "Queen Ant" that leaves eggs behind that hatch into new
ants.
5. This might end up having a screen saver mode also where the ants eat away
the screen by carrying off small pieces of it.

If you have any suggestions you can reach me:


Oh by the way this program is TOTALLY FREE.
(Who would pay for a bunch of ants anyway?)