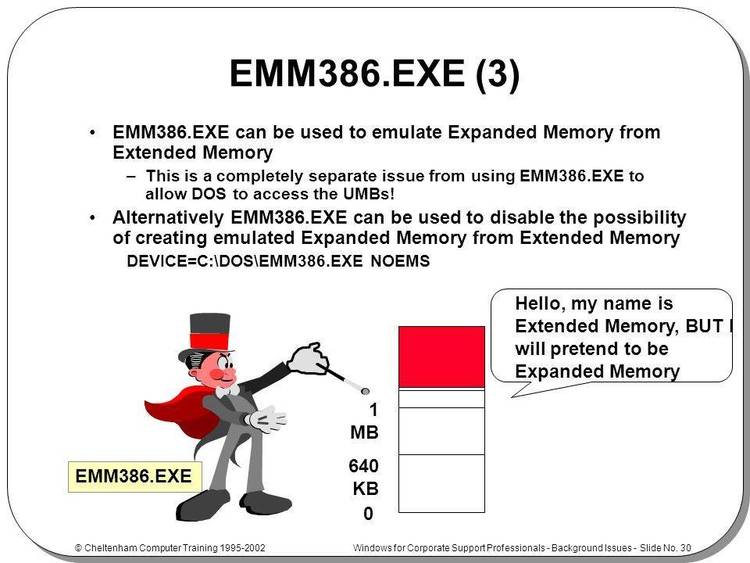 Contents of the VRAM.DOC file

BIOLOGIC COMPANY EXCLUDES ANY AND ALL IMPLIED WARRANTIES, INCLUDING WARRANTIES
OF MERCHANTABILITY AND FITNESS FOR A PARTICULAR PURPOSE. BIOLOGIC DOES NOT
MAKE ANY WARRANTY OF REPRESENTATION, EITHER EXPRESS OR IMPLIED, WITH RESPECT TO
THIS SOFTWARE PROGRAM, ITS QUALITY, PERFORMANCE, MERCHANTABILITY, OR FITNESS
FOR A PARTICULAR PURPOSE. BIOLOGIC SHALL NOT HAVE ANY LIABILITY FOR SPECIAL,
INCIDENTAL, OR CONSEQUENTIAL DAMAGES ARISING OUT OF OR RESULTING FROM THE USE
OF THIS PROGRAM.

VRAM lets you break the 640K memory barrier without additional memory boards or
other hardware. When used in conjunction with applications programs that

support the Lotus/Intel/Microsoft Memory Specification (e.g., Lotus 1-2-3
release 2.0 and Symphony release 1.1) VRAM provides 8 megabytes of memory by
using a hard disk or a RAM disk to simulate an expanded memory board.

Expanded memory was introduced so that programs such as Lotus 1-2-3 could
access more than 640K of memory. Although the 8088 microprocessor cannot
address more than 1 megabyte, a way was developed to let programs access large
amounts of memory by paging in sections of memory as they are needed. Memory
that is not in use is stored as deactivated pages on an expanded memory board.

We encourage contributions by providing quality support now and in the future.
Our products are revised continually to correct bugs and to introduce new
features. The next updated version will be mailed to registered users free of
charge; all other updates can be obtained for $10 to cover the cost of postage,
etc.

In addition, we're available to answer questions from registered users by
phone. Please call us if you're having problems getting VRAM to work or if
you'd like to discuss ways of improving its performance.

o VRAM will work with the IBM PC/XT/AT and the IBM Convertible, and all
compatible computers.

o VRAM takes up about 70K of memory. You'll need enough memory to load VRAM
and the program you are running with it.

o If you are using a disk drive to simulate an expanded memory board, it is
suggested, although not necessary, that it be a hard disk. Some operations
may require a lot of memory paging, which translates into a lot of disk
reads and writes. Hard disks are faster.

o If you are using VRAM with a RAM disk, you'll need a RAM disk program that
can use extended memory, such as DOS VDISK (good name) or AST SuperDrive.
VRAM is compatible with all of them.

o Since VRAM creates a temporary file to hold data that is paged in and out
of memory, your disk free space must be equal to or greater than the amount
of expanded memory you specify on the VRAM command line. In other words,
if you instruct VRAM to create 1 megabyte of expanded memory, you must have
1 megabyte of free space on your disk. This space will remain in use until
you exit your program and VRAM.

To install VRAM, copy the file "vram.exe" from the distribution disk to an
appropriate directory on your hard disk. If you're going to use VRAM with
Lotus 1-2-3, for example, you should copy "vram.exe" to the directory that
contains your 1-2-3 program files.

Step 1. Put the distribution disk in drive A.

Step 4. Repeat this procedure for each program you'll be using with VRAM.

(note: You may want to put vram.exe in a directory for utilities and
include this directory in the DOS path. That way you'll avoid having
multiple copies of VRAM on your hard disk. Read your DOS manual for more
information on the Path command.)

Begin by typing "vram" followed by optional parameters. The last entry on the
command line should be the command you normally use to start your program,
including any parameters.

Parameters begin with a hyphen and a lower-case letter; the corresponding
upper-case letter will have no effect. All parameters are optional and can be
entered in any order. If a parameter is omitted, a default value is used.

The complete format of the command line is: