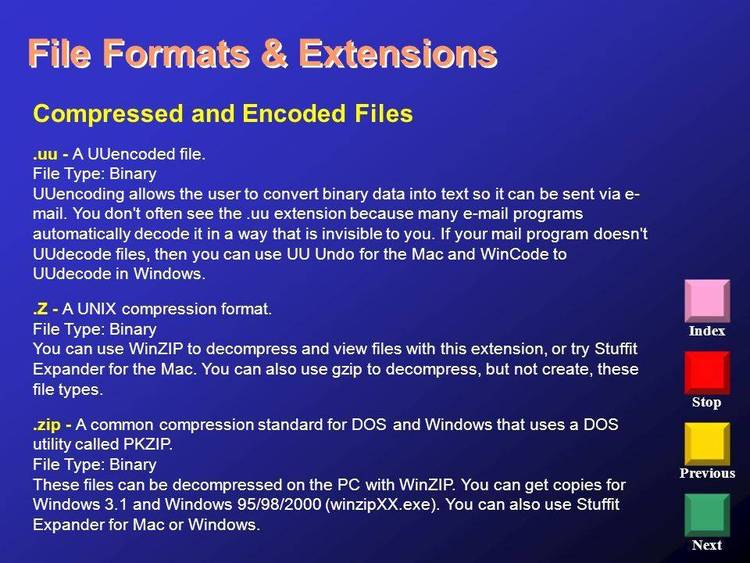 Contents of the FROMMAC.DOC file


Introduction
~~~~~~~~~~~~
This is only a prototype!!! In particular, this means that it does not give
much feedback, and it does not do a lot of error checking (e.g. it does not
check if the specified files exist). Also, it means that it was not written
for speed. If I were to make a "real" version of this program, then it would
be much faster, and about ten times as small. Stated differently: FromMac 0.3
is not even close to the standards I use in definitive programs.

So what does it do? Just feed it files created by a program called UUTool
(which is used on the Apple Macintosh). As opposed to "standard" uuencoded
files, UUTool-encoded files also contain lowercase characters. The following
is a typical UUTool-encoded line:

Another, perhaps easier way to spot such files, is to look at the header of
the first section of the encoded file. As far as I know, UUTool is the only
encoder that uses "0700" as the UNIX file access code. As in:

begin 0700 This is a valid filename on the Mac

Don't bother editing out all non-encoded lines -- FromMac will usually
recognise these as not being encoded.

If you do not provide an output name, then make sure that the extension of the
file you wish to convert is *not* .UUE, since the file that FromMac creates
will have that extension. Some examples:

Wildcards are not allowed, and the input file is not deleted after the
conversion. Now use a standard uudecoder (preferably UU 3.0) to decode
the resulting file.

FromMac was written in a mixture of Pascal and assembly language.

I do not think I shall ever release a "real" version of FromMac, since I
plan to support this Mac-uuencoding scheme in the next version of my own
uudecoder (so in UU version 3.1), and then I shall no longer have the need
for FromMac. Moreover, since UUTool-encoded files are fairly rare, and since
this prototype version of FromMac works fine, improving it is a treatment I
do not consider worth its salt.

One final remark: To accomodate Mac users, encoded files often also contain
a small file called .rsrc, and sometimes also another file called .finfo --
these files will be of no value in a DOS environment, so they can safely be
deleted after they have been uudecoded.

In case you want to contact me (I prefer e-mail):