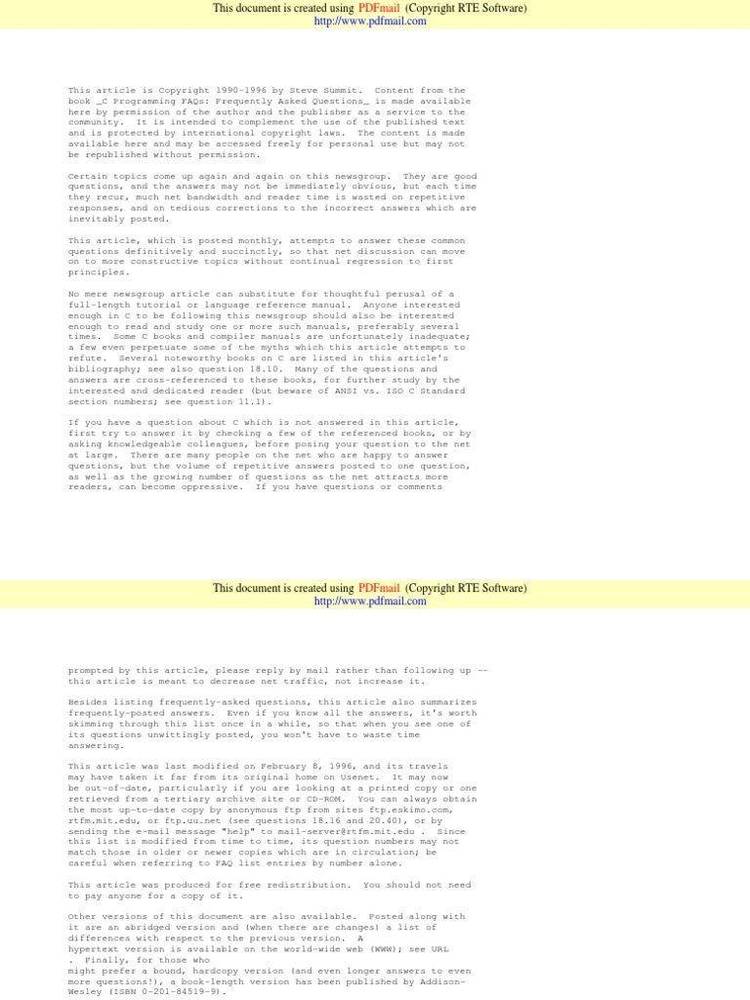 Contents of the TSR.DOC file

This program requires about 3K Bytes of memory and will remain
installed until you enter its name again at the DOS command level.
If no other program has replaced the int(9) interrupt handler since
it was loaded it will then remove itself from memory. EGA/VGA must
be the active video system for this program to run. When loaded the
sixteen palette registers are initialized to the DOS default values.

To run as a TSR, the call-up code may be entered as a command option
or entered at program sign-on (i.e. PALETTE /09). Code entered must
be two decimal digits. Press the HOT keys to call the program for
setting new system color palette register values.

You may run this program in the Non-TSR mode by entering the command
option "/" with nothing following (i.e. PALETTE /).


* CALC.COM * A pop-up programmer's calculator with decimal, hex,
octal, and binary base conversion, bit shifting, and logical operator
functions. It has a 32-Bit number representation and supports two
decimal place integer arithmetic calculations. Screen location may be
changed using the arrow keys. Position is retained until the program
is unloaded or moved again.


This routine is a "TSR" (Terminate and Stay Resident) program. Once
loaded, it can be called up by pressing the "HOT" keys. If it was
already loaded, and you select to reload, it will attempt to unload
itself from memory. It can only do this if it was the last "TSR" type
program loaded. If it can't unload, it will just ignore any reload
attempts. It occupies approximately 4.5K Bytes of memory. The "HOT"
keys are selectable at program sign on or with the load command. To
assign at load time, entering command option (i.e. CALC /8), assigns
the "Alt" and "Esc" keys for callup.
Valid codes as follows * 1 = right Shift & Esc keys *
* 2 = left Shift & Esc keys *
* 4 = Ctrl & Esc keys *
* 8 = Alt & Esc keys (Default) *

To run the calculator in the Non-TSR mode, enter the command option
"/" with nothing following (ie. CALC /) or option /c to set new screen
display colors for CALC.

Mixed-base calculations are supported, and the +,-,*, and / func-
tions are conventional. Beware, though, of only integer mode calcu-
lations. Your fractions disappear, except in fixed two place decimal.


* DOSCOMM.COM * This is a TSR type program. That is when run it will
load itself in memory and stay there until it is unloaded.


This program requires only 3.5K Bytes of memory and will remain
loaded until you enter its name again or the system is re-booted.
To load the program type in "DOSCOMM" at the DOS prompt or put this
command into your autoexec.bat file.


The program functions include the following :

* Assign a command or a series of commands to the function keys.


* Storage and scroll through of last 15 commands entered using the
up arrow and down arrow keys or mouse movement. Just scroll to the
desired command and press "Enter" key or right mouse button. Since
commands executed by function keys are always available they are
not saved in the recall buffer.


* To edit the command list for keys F1 thru F10, enter "DOSCOMM /n"
at the DOS prompt. The current list will be displayed for editing.
The last character of a command is required to be a " ", space or a
"#", pound. The " ", Tells DOS to wait for a command option entry.
The "#", tells DOS to execute the command immediately. All string
commands must end with a "#", except the last in string.

This is a "TSR" program that requires approximately 4K Bytes of
memory and will remain installed until you enter its name again at the
DOS command level. If no other program has replaced the DOS int(9)
interrupt handler since it was loaded, it will then remove itself from
memory. You should make an entry in your AUTOEXEC.BAT file so DOS will
automatically load this program on system boot. To assign call-up keys
at load time add the command option ( /code). The command (DOSHELP /3)
assigns code three (Both Shift Keys).

The program may be run from the DOS command line in a Non-TSR mode
by entering the command option "/" with nothing following
(ie. DOSHELP /). You will be presented with a list of available files
for name entry.

When called from within any text based application program, DOSHELP
.COM checks for a help file with the same filename as the application
programs filename. If one exists it will be loaded, else you are asked
if one should be created. While viewing a help file you may add new
pages using the "Ctrl-A", or "Insert" keys or delete pages using the
"Delete" key. The currently loaded file and current file page will
be retained for subsequent call-ups while the current application is
running. This allows adding an applications screen display to a help
file, removing un-wanted pages, or creating your own help files.

When called with the Alt key, and "HOT" keys pressed, it lists all
the help files available and prompts for a new file name entry to
display. Name entries are a maximum of eight characters as defined by
DOS.

The Default "HOT" Keys are Both Shift Keys. Others may be assigned
as listed below. Pressing these keys, will call the program to view a
previously selected help file, or load a new help file for viewing.

The ".HLP" file does not contain screen color information. Pages
added or inserted in this file do not retain screen color. Each page
added increases file size by 2K Bytes.

The ".CLP" type file does contain screen color information. Pages
added or inserted in this file will retain and display the original
screen colors. Each page added to this file increases file size by 4K
Bytes.

* POPDIR.COM * This program requires about 14K Bytes of memory, 5K for
program, and 9K for data storage. It may be run as a TSR, or as a
standard routine. In the standard mode you may select and execute any
executable DOS function or list any non-executable file. The display
window size is variable from 2 to 18 lines and can be relocated any
where on screen. Display colors may be changed to any desired color.
When the highlight bar and cursor are not present, press "Return" to
to enter the select mode.


Enter the call-up code at the end of the command to install as a pop-
up directory routine. Then you may press the "HOT" keys from within
any text based application to call the program for listing / viewing
files or sub-dirs in any selected directory (i.e. POPDIR /5). In this
mode only the file list function is active. If run as a TSR, it may be
removed by entering its name again at the DOS command prompt. If no
other program has replaced the DOS int(9) interrupt handler since it
was loaded it will then remove itself from memory. Any invalid entry
for code option will cause the program load to hesitate, requesting a
valid code entry. If entry is invalid at this point, the default code
is assigned.

To run as a standard program with the execute function enabled, enter
the command option "/" with nothing following the "/",(ie. POPDIR /).


* POPCAL.COM * This is a pop-up calendar display with a clock. You may
set the calendar to any month of any year using the arrow keys. The
clock only displays when the calendar is set to current (system) month.
The clock alarm may be set for the desired time of day. This setting is
recorded for use on subsequent program loads until reset. Enter the
alarm time in 12 hour format as shown, terminated with "A" or "P'. Turn
the alarm off by any invalid character in alarm setting. You may turn
off the calendar display, leaving clock on screen with the Delete Key.
You may enter a message that will be displayed during alarm time.
To terminate the alarm press the program HOT keys.

You may assign a call-up CTRL Key as a command option when loading or
the program will prompt you for a CTRL Key entry at load time. At the
prompt just press the CTRL key & the letter desired. Acceptable letters
are A to Z. When entered as command option, enter (/letter) following
program name. Load Popcal With Ctrl-P Callup Code (i.e. popcal /p).

This program requires about 4K Bytes of memory, and will remain
installed until you enter its name again at the DOS command level.
If no other program has replaced the int(9) interrupt handler since
it was loaded, it will then remove itself from memory.

Press the HOT keys to call the calendar for display

* SCRNCLK.COM * This is a movable clock display for continuous time
monitor. It has four assignable call-up codes for re-location and
alarm setting from within any application program. It displays in a
12 hour time format with AM/PM indicator. It will display on window's
screen but cannot be called for relocation while the system is in a
graphics mode.
You may set an alarm time and message to be displayed during the
alarm time which is set for thirty seconds. This time and message is
stored for subsequent program loads, so tomorrow you will get the
same alarm and message. To terminate alarm press program HOT keys.
The call-up code, and original screen location may be entered as a
command option when loading. Option format is : /keycode,row,column
See key codes below. row = 00 to 24, column = 00 to 69. Defaults are
key code 9, row 24, column 69.

Both clocks may be removed at any time by re-entering their name
at the DOS command level.