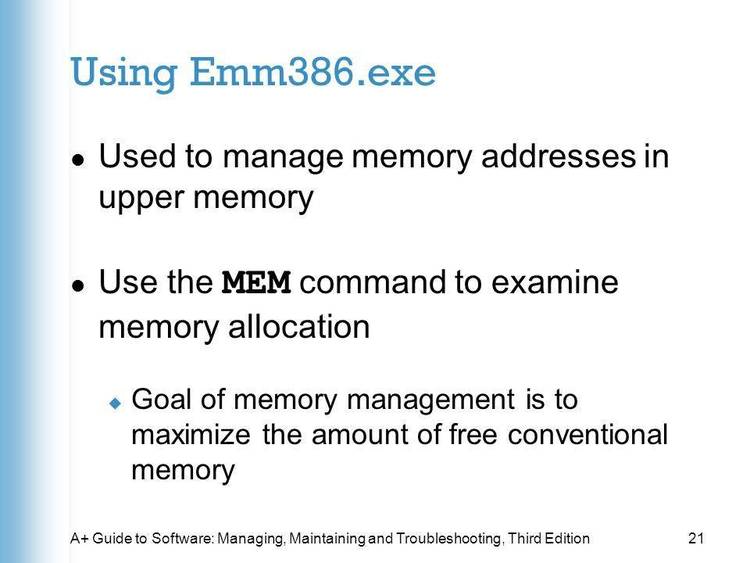 Contents of the JAMBO.DOC file


JAMBO is a Device Driver which is designed to make more memory available
for you using DOS 5.0 with its EMM386.EXE memory manager.

JAMBO is a provided as a fully working Shareware product by

manufacturers of the Dynamic Memory Control package which can load and
remove device drivers and TSR programs from conventional and Upper memory
memory without rebooting. If you register JAMBO (registration fee is
$10.00), you will receive a coupon to purchase Dynamic Memory Control at
50% off (a $40.00 savings), as well as the latest version of JAMBO when it
is available.

JAMBO gives you several different options to get more memory in the Upper
Memory Blocks (UMB) area (the area past the 640k boundary). You can
increase the Upper Memory available by as much as 92k, and have this 92k
adjacent to your current UMB, making it 92k bigger.

Most systems have free memory in the area past 640k. A normal memory layout
would be something like this:

Looking at the above diagram, if you could free up the area called BIOS,
you could add an extra 64K of upper memory, and if you could move the video
code page at C000-C7FF somewhere else, you could get another 32k, making a
total of 96k.


JAMBO can let you do this, by using the HMA, which DOS normally uses. There
is a tradeoff, of course. You will use about 40k more of conventional
memory, since you cannot use DOS=HIGH in CONFIG.SYS (only with the /BH or
/VH options of JAMBO). But, you get up to 92K more of upper memory by
sacrificing 40k of conventional. And your upper memory is one big area, for
loading network drivers, CD-ROM, and any other programs. You can get as
much as 220k of upper memory.

The way JAMBO works is simple. You include JAMBO.EXE as a driver in your
CONFIG.SYS file at boot-up time after DEVICE=HIMEM.SYS and before
DEVICE=EMM386.EXE, and specify either one or two parameters. The parameters
can cause JAMBO to swap the video code page at C000 (hex) to somewhere
else, and the BIOS code page at F000 (hex) to somewhere else. The
"somewhere else" is defined by one of the following:

DEVICE=JAMBO.EXE /VN swaps the video code page into Expanded Memory,
but no optimization is done. This makes for
slower screen displays, but may be better for
some programs which use graphics. Use this
choice only if /VA does not work for you.

DEVICE=JAMBO.EXE /VM swaps the video code page into the monochrome
buffer at B000 (hex). This option can only be
used if you do not use any software which tries
to use the monchrome buffer. Most systems which
have a color display can take advantage of this
option.

With all of the above options, you can then include the video code page at
C000 (hex) when you use EMM386.EXE, to make it into Upper Memory, available
for loading TSR's and device drivers. You use the "I=" parameter to do
this, such as "I=C000-C7FF".

DEVICE=JAMBO.EXE /BH swaps the BIOS code page at F000 into the HMA,
giving you another 60k to use with EMM386.EXE.

The "/BH" option lets you load the BIOS code from F000 into the HMA (High
Memory Area). This will let you allocate the area from F000-FEFF (not
F000-FFFF) for use by TSR's and device drivers. When specifying the
parameter to EMM386.EXE, use:


Remember that the JAMBO.EXE device driver MUST always be in CONFIG.SYS
BEFORE "DEVICE=EMM386.EXE", and AFTER "DEVICE=HIMEM.SYS". The following
examples show you how to set up JAMBO in different configurations.

Suppose you are using EMM386.EXE (the memory manager which comes with DOS
5.0). To swap the video page to Expanded memory, and give yourself an extra
32k, use the following commands in CONFIG.SYS:

The 32k extra will be added to the front of the UMB area which the memory
manager used to pick up for you.

We specified FRAME=E000 here because the memory manager usually likes to
place the Expanded Memory frame at D000, and E000 is more advantageous,
since you can get more memory in a single UMB that way.

The High Memory Area (HMA) is where DOS locates much of itself if you use
the DOS=HIGH option in CONFIG.SYS. That usually saves 40k to 50k of
conventional memory. But if you would rather have 32k more in Upper Memory,
for loading networks, or other big TSR's or device drivers which won't
otherwise fit, JAMBO gives you the option of relocating the video code page
to the HMA. You would do it like this:

In this case, we don't use DOS=HIGH,UMB, just DOS=UMB, so that DOS will not
load itself into the HMA. But we do tell the memory manager to include the
video page which we have swapped to the HMA (C000) with JAMBO.

Doing this causes DOS to use more conventional memory, but gives you a
bigger Upper Memory region.

and you don't run programs that use the monochrome area, you can pick it up
as an area for the video code page.

Why is that an advantage? Because swapping the video code page with the
monochrome buffer gets you a bigger (32k bigger!) UMB instead of having a
separate 32k area, and another area. That means you can load TSR's and
device drivers in one big UMB area instead of having to juggle programs to
see which will fit best in each UMB.

To use the monochrome buffer, you would use:

In this example, we include the video code page with the I=C000-C7FF
option, and also include the monochrome buffer with I=B000-B7FF, for JAMBO
to use.

You can swap the BIOS in page F000 into the HMA, giving you an extra 60k of
upper memory (not 64k, because the last 4k at FF00-FFFF must be left
alone). With this option, you can not use DOS=HIGH in CONFIG.SYS, but you
do get a much bigger high memory area. You would use the following
parameters:

This would put the Expanded Memory page frame at E000, splitting up the
region. A better way to do this would be:

Where the Expanded Memory page frame is at C800 instead, and you get a
bigger single contiguous region.

If you were to load the video code page into Expanded Memory, and load the
BIOS page into the HMA, and include the monochrome buffer as upper memory,
you would have a 220k of available Upper Memory in two regions (the color
buffer is between them at B800-B8FF). You could use the following:


Notes about JAMBO
-----------------
JAMBO has been tried on many computers successfully, including
Packard-Bell, DELL, Toshiba, IBM and several other clones, but in our
experience, we can truly say that "no two clones are alike". If you
experience a problem with JAMBO, we would like to hear from you so that we
can make it a better product.

JAMBO is provided as a Shareware utility. Please pass it on to others to
try, however no commercial fee may be charged for its use. JAMBO is a
copyright software product of Adlersparre & Associates Inc.

You are encouraged to register this software product, to take advantage of
the special offer to purchase Dynamic Memory Control at half price, and to
receive the latest version of JAMBO, when it is available.

Dynamic Memory Control can load and unload TSR's and device drivers from
conventional and upper memory, and convert device drivers and TSR's into
self-removing programs. It also has several memory maps, system displays, a
full-screen editor, pull-down mouse supported windows, and will even create
batch files to automate your applications. And you can get DMC for only
$39.95 (a $40.00 savings) when you register this copy of JAMBO.

Call for info on other products from Adlersparre & Associates Inc.