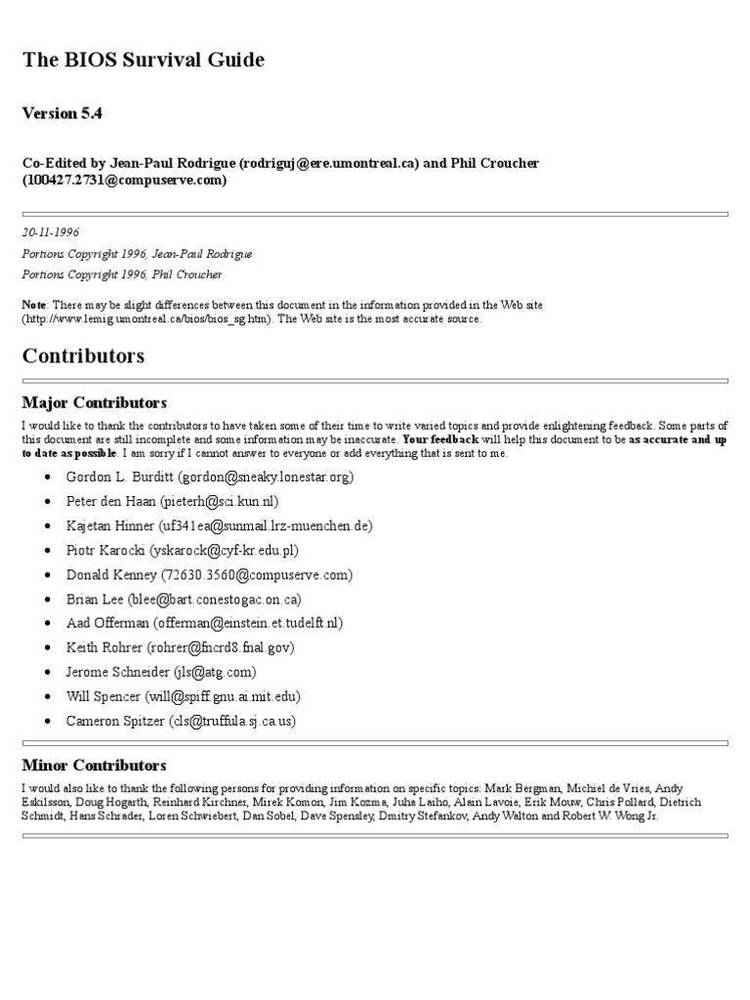 Contents of the HILOAD.DOC file


HILOAD is a utility program designed to load your normal TSR
(Terminate-and-Stay-Resident) programs somewhere else in memory.
Usually this is a place outside the normal DOS region; that is, outside
the first 640K of system memory.

At this time, it does not include either extended or expanded
memory.


The 8088 used in the PC-XT is capable of addressing up to 1024K
of memory. The designers of the PC and DOS decided that only the first
640K would be used by the operating system, DOS, and the rest was reserved
for other uses.

Because of the way the 8088 forms addresses, it is customary to
refer to addresses by a segment:offset combination. The 'actual' final
address is formed by multiplying the segment value by 16 (i.e., shifting
it left 4 places) and adding the result to the offset address.

For convenience, we may speak of the various segments as:

What is in the other 6 segments? Is that 384K of potential
memory just sitting there idle?


Well, actually not. Some of these blocks have been set aside,
and are probably being used, for specific purposes.

Block B is where the memory for the video sits. If you have
a Monochrome Display Adapter (MDA), it uses 4K of memory at addresses
B000:0000 to B000:1000, and the remainder of the B block, 60K, is
unused. In fact, if you have a straight monochrome card like IBM
supplies, that's all the memory you have available.

Enhanced Graphics Adapters (EGA) are even bigger consumers of
memory, at maximum using the A block and part of the C block!

If you have a hard disk, its BIOS is normally located on the
hard disk controller card, and is ususlly resident at C000:8000, or
as it is commonly referred to, C800:0000.


Astute observers will notice that the D and E blocks were pretty
much left out of the above description. It is believed that these areas
of memory were set aside by IBM for program cartridges, but few, if any,
of these were actually produced, and this area is normally wide open and
available for use.

If you are like most PC users, you have only a monochrome or CGA
display, and the A block is available to you also.


The '640K barrier' people talk about is caused by two reasons:
programs are getting more sophisticated and user-friendly, meaning they
take up more memory. Secondly, there has been a proliferation of many
handy programs that reside in memory (TSR's) which 'pop up' with useful
information at the touch of a key or perform some other action. Examples
are SideKick from Borland International, various printer buffers which are
almost a necessity, and so on. It is not too unusual to have half one's
DOS memory taken up with various TSR's.

While there's little we can do about fat programs, we can move
these TSR's out of the way. This was the driving force behind the
development of HILOAD.


WHERE DO I GET THIS MEMORY?

Some PC clone makers map their memory into the D and E blocks;
Kaypro for one does, others may also. Constructing a board to fill in
these holes is not difficult, especially if static RAMS (SRAM) are used;
these are now available in 32K X 8 sizes at attractive prices.

An old trick is to use commercial memory cards (now obsolete
but available) that allow themselves to be mapped into the desired
regions.

Finally, users of Hercules Graphics cards and their clones usually
have the full 64K in the B block available, but only 4K is used in text
mode. That 60K looks mighty attractive, as does the 'spare' memory on
a CGA card...BUT...because one may easily forget there are programs in
that space, switching to Herc graphics, or simulating a CGA, or using
a CGA in graphics mode will really screw up the works, so this technique
is not recommended. It may be used to test out the program, though, and
see if it's worth the small trouble to get memory for the 'safe' areas.


HOW THE PROGRAM WORKS


HILOAD grabs the program you want, as well as any command tail
required, and loads it into the memory area you specify. After loading
the candidate TSR program, it revectors several DOS interrupts and then
executes the TSR program in the new location. When the TSR program
attempts to 'go resident', HILOAD traps that request, either from INT 27H
or function 31H of INT 21H, resets the appropriate interrupt vectors,
examines the interrupt vector table to see which ones point to the new
program, and then terminates normally.

Thus, when HILOAD exits, zero DOS memory is used up, and the
TSR is snugly nestled in another part of memory, acting just like it
normally does.


HOW TO SPECIFY VARIOUS THINGS

Addresses - HILOAD requires a starting address for placing TSR's.
After it places the first one, it keeps track of where
it should place the next one by using the Intra-application
Communication Area (ICA) at 0040:00F0 through 0040:00FF.
It checks this area and computes an address from the
information there, so the initial starting address has
to be specified only once (until you change blocks).
As long as the loading area is contiguous, the starting
address need not be re-specified.

The starting address is specified by an environment
variable, which is discussed below.

Program names - The program name to be loaded must be specified
with the full path name. Sorry about this, but it
wasn't worth the effort to program the logic to chase
down the paths to find the programs. This is not
considered (by me, anyhow) to be a serious objection,
as the typical use of this program is in your AUTOEXEC
file where it is only typed in once.

Starting off - Executing HILOAD without any program specified
causes it to zero out the ICA. This is the easiest
way to begin a loading sequence after changing the
start address.


When DOS loads a program, it also provides that program with a
copy of what it calls the Environment. To see what the contents of
your environment are, do the following: