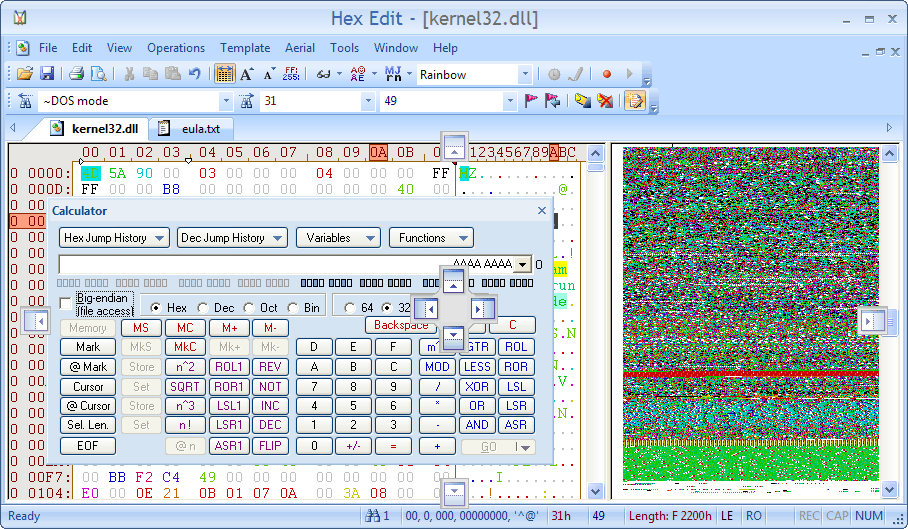 Contents of the HEXEDIT.DOC file

You can use a word processor or text editor to modify text files, but
neither of those programs can edit binary files. Files with extensions
such as .EXE and .COM, or other binary files such as graphics files,
simply won't load into a word processor.

HexEdit lets you load, view, and edit binary files of all kinds. It
includes many word processing features, such as search and replace,
making it one of the most powerful editors available.

Program files -- those with extensions .EXE and .COM -- must be
modified very carefully. Unless you're very familiar with binary
program files, use HexEdit only to change the ASCII portions of those
files. If you change other parts of the files, or alter their length,
chances are they won't run.

WHEN MODIFYING FILES, ALWAYS WORK WITH A COPY OF THE FILE, NEVER
WITH THE ORIGINAL FILE!

Those cautions aside, there are many uses for HexEdit. Programmers
can use it to fix spelling errors in a .COM or .EXE file without
recompiling the program. Database users can repair corrupted data
files. End users can use HexEdit to examine and alter programs and
other binary files.

You can also use the program to inspect binary files for messages
that may indicate that the file is a Trojan horse program. Most
of these programs contain some sort of message, like "Gotcha!" or "Now
Trashing Hard Disk."

Finally, it's just interesting to have the power to look inside files
you couldn't see before.

Install HexEdit by copying HEXEDIT.EXE onto your utility diskette or
into a directory on your hard disk. If you copy the program into a
directory named in the PATH statement in your AUTOEXEC.BAT file,
you'll be able to run it from any prompt. For more information about
the PATH statement, see your DOS manual.

Start the program with the command HEXEDIT