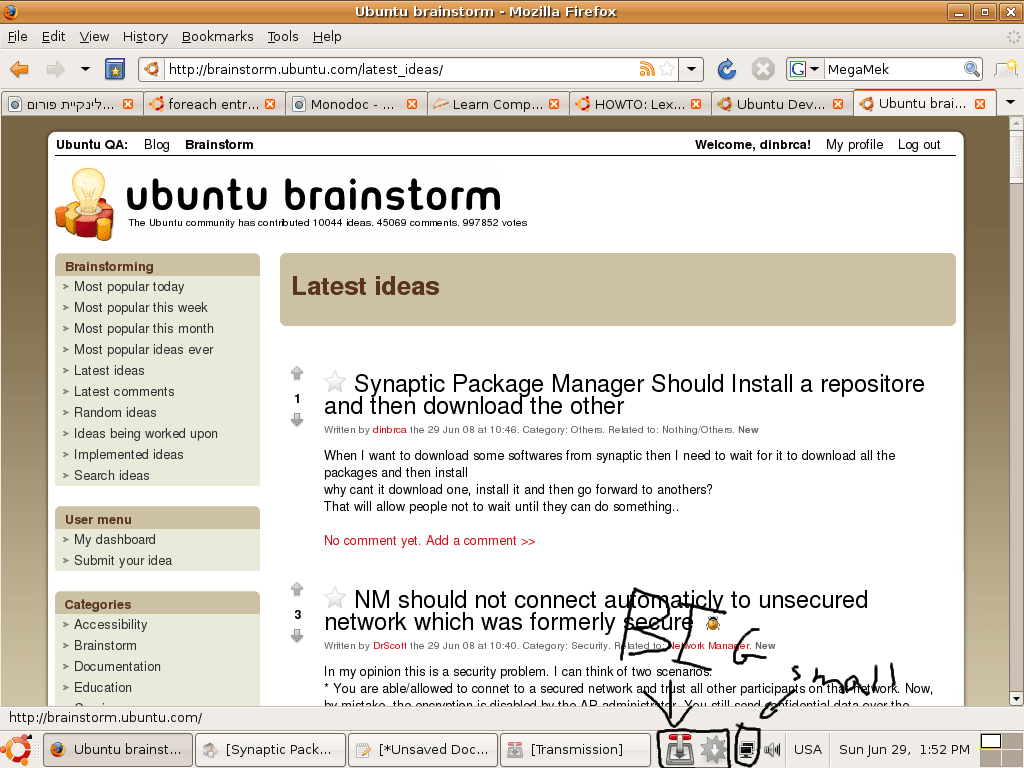 ECHO OFF
CLS
TYPE README.TXT
New..
New...
New.... Included is the CronJr Schedule Editor. There currently is
no manual for this utility. Run EDITCRON from the directory
containing CRONJR.SCH and the rest should be obvious.


To print out the CronJr manual, type the following command at the DOS promt.

To do a quick installation, type the following commands at the DOS prompt.


Please review the ERROR.LOG file for a listing of any known compatability
problems.


Contents of the MANUAL.DOC file

ECHO OFF
CLS
TYPE README.TXT
New..
New...
New.... Included is the CronJr Schedule Editor. There currently is
no manual for this utility. Run EDITCRON from the directory
containing CRONJR.SCH and the rest should be obvious.


To print out the CronJr manual, type the following command at the DOS promt.

To do a quick installation, type the following commands at the DOS prompt.


Please review the ERROR.LOG file for a listing of any known compatability
problems.

MS-DOS based machine running MS-DOS 3.30 or higher.
MS-DOS versions below 3.30 may be used, but are not
recommended, since they require CRONJR to use more memory.

The reason for designing CRONJR was for lack of anything
better in the MS-DOS world. Simple but powerful programs
like cron (part of AT&T's Unix) or Sleeper (public domain
for HP's MPE) are non existent for PC's.

With more and more companies moving from mini-computers
to PC based LANs, one of the many things that has been lost
was the ability to schedule the nightly reporting and
maintenance programs needed to keep a business working during
the day.

Sure, it's possible to just write a large batch file
that will run all your programs one after another. That
solution is fine if it meets your needs. But if you need
programs to run at specific times, and especially if your
business revolves around a LAN, then this product is for you.

There are 3 methods of scheduler implementation in a DOS
environment.

Make a background RAM resident program that will
pop up when it is time to run the tasks.

Make a foreground program that loads the tasks as
child processes.

Make a transient program that is only in memory
when it is needed. Therefore, all memory is
available for the task.

The last thing the world needs is another RAM
resident program to eat up memory, steal clock
cycles, and substitute custom interrupt vectors. Most
LAN users already use 20-70k for their network shell,
and even more if they are running a NETBIOS emulator.

The way most resident schedulers work is to stuff the
keyboard when it is time to execute a task. This
method can be seen in various automatic tape backup
programs. This method is unreliable since the assumption
is made that the DOS prompt is available, the command
line is clear, and the path is set.

This method requires too much memory. If you want to
run a batch file then you have to load another version
of COMMAND.COM on top of the parent scheduler.

1. It is so simple. It relies heavily on two simple
operating system level batch files.

* The dreaded asterisk - If you are using a DOS
version below 3.3 then around 23k is lost because
COMMAND.COM needs to be invoked a second time.
It is strongly recommend that DOS 3.30 or above is
used.

1. The schedule file CRONJR.SCH is created by you. It
contains the timing parameters for the tasks to be executed.

2. The master batch file, CRONJR.BAT, is loaded from the
command line. That is your last intervention.

4. The scheduler program, CRON.EXE, is loaded and the
schedule file CRONJR.SCH is read.

5. When the time comes to execute a process CRON.EXE
dumps its scheduling information to CRONJR.JOB, writes the
CRONWK.BAT bat file and unloads from memory to return control
to CRONJR.BAT.

7. Upon completion of CRONWK.BAT, control is returned to
CRONJR.BAT which then executes CRONJR.BAT (thus ending the
original CRONJR.BAT execution) with the parameter RELOAD
which is passed to CRON.EXE in step 4, which causes the file
CRONJR.JOB to be loaded rather than the file CRONJR.SCH .


Hard to follow? Try this one. It is the remedial
version.

Create a directory for CRONJR, any name will do, and
copy the CRON.EXE program into the new directory. If you are
going to use CRONJR on a LAN with multiple machines running
CRONJR, then you must make a separate directory for each
machine.

Each directory must contain its own CRONJR.SCH file and
its own unique CRONJR.BAT file. A path may be set to point
to the location of CRON.EXE.

For each CRONJR directory created, type CRON START at
their respective DOS prompt. Such as:

Create a flat ASCII file (no tabs) named CRONJR.SCH or
edit the one on the distribution diskette. Enter one task
per line using the following format.

Type CRONJR at the DOS prompt and you are finished.

*: execute on every occurrence - not used by day_of_week .
i: execute in increments - only applies to minute and
hour. The 7th line in the example shows 2i which
means execute in 2 minute increments. In theory this
task could be executed 30 times a hour. Obviously *
must be used for every level after the first i .
Combinations of i in the minute and hour are not
allowed. The expected outcome is that only the
hour increment will be used. If 'i' is used with the
hour, then the minute should be *, otherwise
execution will occur in x hour increments, but only
on the specified minute. Thus 30 1i does not mean
execute every 90 minutes, but execute hourly on the
30th minute of the hour.

Task checking and launching occur on the 1st second of
the minute.

Be very careful when assigning launch times. A 'feature'
of CRONJR is that it only launches tasks when CRON.EXE is
resident. Example: you have 2 tasks set to execute at 19:00,
each takes 20 minutes to run, and few tasks scheduled at
19:15. At 19:00 all 19:00 tasks are tagged for launching and
the first task will be launched at 19:00. The 2nd task will
be launched when CRON.EXE is reloaded and thus effectively
launched at 19:20.

To prevent this from happening you should do the
following. Schedule enough time between tasks. The 19:15
tasks in the example should have been set later to 20:00, or
earlier to 19:00. Had they been scheduled at 19:00 then they
would have run as part of the 19:00 launching.

The best way to debug a faulty schedule is to run
CRON.EXE instead of CRONJR.BAT, and use the F1 key to exit to
DOS and change the time. Inspect the CRONWK.BAT file that is
created.

There is no limit to the number of tasks you can put
into the CRONJR.SCH file.


Common problems
---------------
CRONJR program is running, and exits to DOS and does nothing.
Problem: Running CRON instead of CRONJR.
Problem: Did not run CRON START in the execution directory.

CRONJR does not execute the programs listed in CRONJR.SCH
Problem: Could not find the programs. Need to specify the
path in the CRONJR.SCH file or verify that programs
are in the current directory.
Problem: You did not specify .BAT, .EXE, or .COM .
Problem: Your scheduling parameters are incorrect. Most
likely day_of_the_week not included. I.e. You
are testing on Saturday a job you have set up
to run Monday through Friday.

It was mentioned earlier that there are no programs
available similar to CRONJR. Well that is no longer true.
There is a product called PS-Batch from Brightwork Development.
Its list price is around $595.00, it must be licensed per
file server, it uses about 40k of memory and it is limited
to Netware. CRONJR on the other hand is available for
$35.00, licensing is per site - not batch station or server,
it uses 0k of memory and will work on ANY LAN or stand alone
PC.

I am sure PS-Batch is a fine product and has many more
features than CRONJR. Many of these features were purposely
designed out of the original versions of CRONJR.

There are two known anomalies and one other point that you
need to remember.

Anomaly 1. Cronjr only executes tasks on the 1st second
of the minute. Example. If you had 3 tasks that each take 5
seconds to complete, and they are all scheduled to launch at
19:00 then they will be effectively launched at 19:00, 19:01
and 19:02. This feature was designed into the product.

1a. Job #1 launches at the first available minute.

2a. Job #2 launches at the first available minute
after Job #1 completes.

3a. Job #3 launches at first available minute after Job
#2 completes.

The best way to get around this confusion is to do one
of three things.

2. Rather than make your launchings incremental, make
them minute specific. This may involve multiple line entries
into the CRONJR.SCH file for he same job at different times.

Software Shorts hereby disclaims all warranties relating
to this software, whether expressed or implied, including
without limitation any implied warranties of merchantability
or fitness for a particular purpose. Software Shorts will
not be liable for any special, incidental, consequential,
indirect or similar damages due to loss of data or any other
reason, even if Software Shorts or an agent of Software
Shorts has been advised of the possibility of such damages.
Software Shorts will not be liable for any damages due to
malicious third party augmentation of the executable program.
In no event shall Software Shorts's liability for any damages
ever exceed the price paid for the license to use software,
regardless of the form of the claim. The person using the
software bears all risk as to the quality and performance of
the software.

Software Shorts is not affiliated with any of the above
mentioned companies.

The first version of CRONJR was released in November of
1988. It has also been in constant use since that time, with
it now being August 1991.