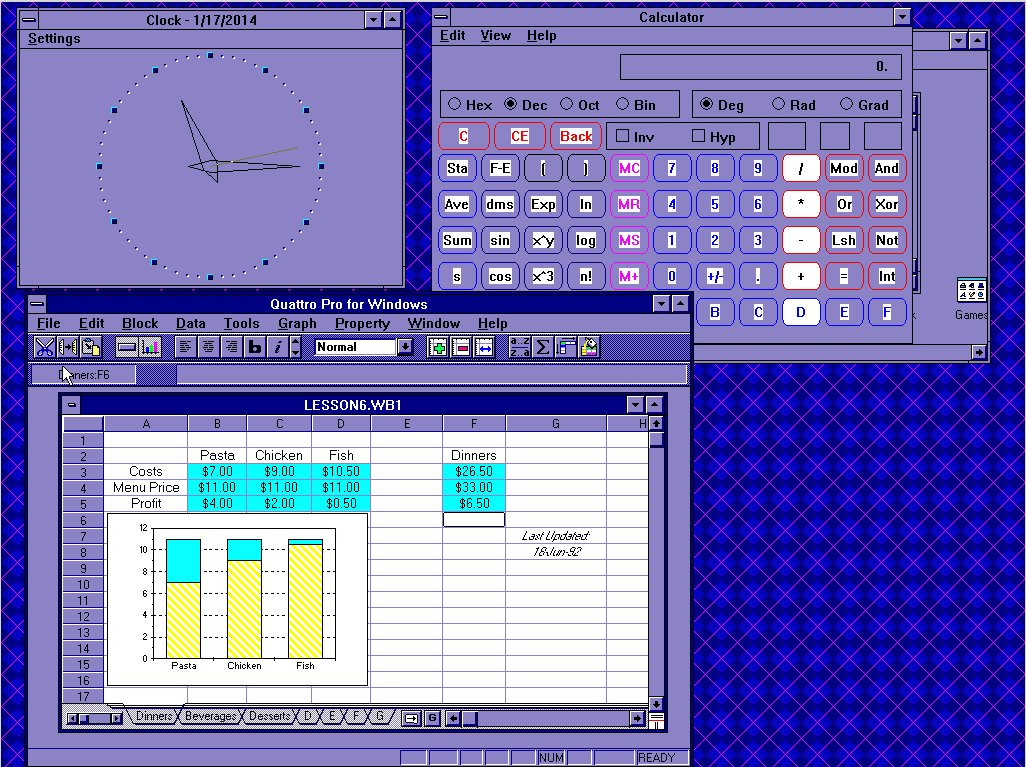 Contents of the CMDMGR.DOC file

Command Manager is a utility program that provides the ability to
store up to 200 DOS commands for later editing and execution. This
program is not a TSR as are a number of command line editors (HISTORY,
CED, NDOSEDIT, etc.) with which you may already be familiar. This
means that will be able to store up just the commands you want and,
also, not be concerned with managing another memory-hungry TSR that's
always around even when you don't need it.

A short list of the features of Command Manager:

-- Selectively store up to 200 DOS command lines as you run them
-- Recall any saved commands for execution, editing, or cloning
-- Display all saved commands that begin with a defined 'mask'
-- Store new commands at any time without executing them
-- Ability to create a queue of commands to execute in sequence
-- Save and recall queued command files
-- Choose between 'shell', 'child', or 'exec' execution modes
-- Choose color or monochrome (B&W) display modes
-- Uses 43/50 line EGA/VGA display modes, if available
-- Not a TSR

The Command Manager executable file is named "x.exe". This should
NOT be renamed to something else, since the new queue processing
capabilities added beginning with v1.40 need that name to accurately
perform some functions.

This document supports v1.41 of Command Manager. To get a quick
overview of the new features and fixes included in this version, see
the RELEASE NOTES section near the end of the document. Also, new
sections in the documentation that pertain to the current version have
been marked with a '|' character in the rightmost column so you may
find them quickly.


*** |
*** COMMAND MANAGER DISTRIBUTION FILE |
*** |
|
The complete distribution file for Command Manager v1.41 should |
contain the following files: |
|
X.EXE -- This is the Command Manager executable file |
(51663 bytes, dated 07-12-90) |
|
CMD_FILE -- This is a sample stored commands file |
|
CMDMGR.DOC -- Command Manager documentation |
|
CMDMGR.AD -- A one-page game description and registration |
order form |
|
SUPPORT.BBS -- Where to obtain the newest versions of Command |
Manager and my other shareware programs. This |
is also where you can contact me with questions, |
comments, suggestions, and orders. |
|
My original Command Manager distribution file is a PKZIP-created |
archive named CMGR141.ZIP. The unarchiving utility PKUNZIP is |
required to recreate the five original files from this archive. If |
you do not have PKUNZIP, you will need to obtain it from your favorite |
BBS. The current version of this utility should be contained in a |
file called "PKZ110.EXE". |

*** |
*** INSTALLING COMMAND MANAGER Page 3 |
*** |
|
You may run Command Manager from your hard drive or from a floppy |
disk. To install Command Manager, you need only copy the distribution |
file to the desired directory or sub-directory and enter the command, |
"PKUNZIP CMGR141" to recreate the Command Manager files. For example, |
if you have the disk containing the distribution file in floppy drive |
A: and you wish to install Command Manager on your hard drive C: into |
a new directory called "cmgr", you should put the diskette into drive |
A: and issue the following commands: |
|
c: (make hard drive C: the current drive) |
cd \ (change to the root directory) |
md cmgr (create the new sub-directory "cmgr") |
cd cmgr (change to the new sub-directory) |
copy a:cmgr141.zip (copy the distribution file from diskette) |
pkunzip cmgr141 (recreate the Command Manager files) |
|
NOTE: PKUNZIP must be in the current directory or in a directory that |
is accessible through your PATH environment variable. |
|
*** |
*** VERIFYING YOUR VERSION OF COMMAND MANAGER |
*** |
|
If you use the VALIDATE.COM utility to verify the integrity of |
executable files, it should produce the following output for |
X.EXE -- |
|
VALIDATE 0.3 Copyright 1988-89 by McAfee Associates. (408) 988-3832 |
|
File Name: x.exe |
Size: 51663 |
Date: 7-12-1990 |
File Authentication: |
Check Method 1 - 8CB5 |
Check Method 2 - 0423 |
|
If the Command Manager distribution file you received or downloaded |
does not contain the five files listed above, if it is not named |
CMGR141.ZIP, or if VALIDATE does not produce the results listed above |
when run on X.EXE, please contact me via a bulletin board or phone |
number given in the "Command Manager Support and Newest Versions" |
section of this document. Let me know the details of the discrepancy |
and where you obtained the incorrect distribution file and I'll ensure |
that a correct and authorized CMGR141.ZIP file is made available to |
you either by mail or by uploading it to your favorite BBS. I will |
require either a fully paid registration or $3.00 to cover costs of |
disk, mailer, and postage before I can mail you a new program disk. |
I'll upload to your favorite BBS in exchange for the phone number of |
that BBS. |

There are numerous command line options available for use with
Command Manager:

-- Entering a command in the format "x [DOS command]" will
call Command Manager, save the DOS command, and execute
it. No windows will be displayed.
For example, "x type autoexec.bat" will save the 'type
autoexec.bat' command for future use and then execute it
normally. This will be referred to as Command Line Mode.

-- Entering "x" by itself calls Command Manager and opens a
window displaying the commands that have been stored.
From here you may select, edit or delete any of these
commands. This will be referred to as Interactive Mode.

-- Command Manager has four 'switches' that invoke special
options. These switches provide the ability to save new
commands without executing them, the ability to list all
saved commands that begin with a defined 'mask', the
ability to use a black-and-white or monochrome display
instead of the normal color display, and the option to
disable the use of extended 43/50 line EGA/VGA text
modes. This will be referred to as Option Mode.

-- Entering "x /?" or "x /v" displays a version/registration
info window. Press any key to put away this window after
you are done reading it. This same window can be seen by
pressing 'ALT-V' when in Interactive Mode.

The Command Line Mode of Command Manager is invoked any time you
preface a normal DOS command with "x " (that is, 'x' plus a space
character). Command Manager creates and maintains a file called
'cmd_file' where all the stored commands will be saved. Command
Manager will first look for this file in the current working directory |
and in the root directory of the current drive. If the file is not |
found, Command Manager will check the root directory on every drive on |
your computer to try and find it. If 'cmd_file' is still not found, |
you will be prompted to choose where a new commands file will be |
created for you. 'cmd_file' is maintained in such a way that the |
command used most recently will be made the first command in the file.
Any legal (or, illegal, for that matter) DOS command may be stored by
Command Manager. Once the current limit of 200 commands have been
stored, any attempt to store another will result in the command at the
bottom of the file being dropped in favor of the new command.
There is one general exception to normal DOS command formats when
used with Command Line Mode. Any DOS command that utilized a
redirection operator, such as "type autoexec.bat >outfile" or "dir |
more", must be enclosed in double quotes for Command Manager to store
them properly. For example, to save the first example you would use
the command:
x "type autoexec.bat > outfile"

NOTE: Beginning with version 1.11, the distribution archive file
contains a sample/starter 'cmd_file' that contains a few commonly-used
DOS commands. Copy this file into the desired working directory on |
your computer's hard drive, or, onto the floppy disk from which you |
will run Command Manager and you'll be ready to start using the |
program. You may also use the '-a' switch to create 'cmd_file' and
add the first command to it if it does not already exist.

The Interactive Mode of Command Manager is invoked by entering "x"
by itself as a normal DOS command. It is recommended that the 'x.exe'
file be placed in your root directory or any other directory listed in
your PATH environment variable so that it may be accessed from
anywhere. When you invoke Interactive Mode you will be presented with
one window showing the available functions and another presenting the
currently saved commands that you may choose from. The available
functions are listed below:

ENTER: Press the Enter key to execute the currently highlighted
command in the commands window. Before the command
executes you will be asked if you wish to return to
Command Manager upon completion of the command. Press
'N' (the default) for "No", 'Y' for "Yes", or use the
left/right cursor keys to move the highlight box to the
proper response and press