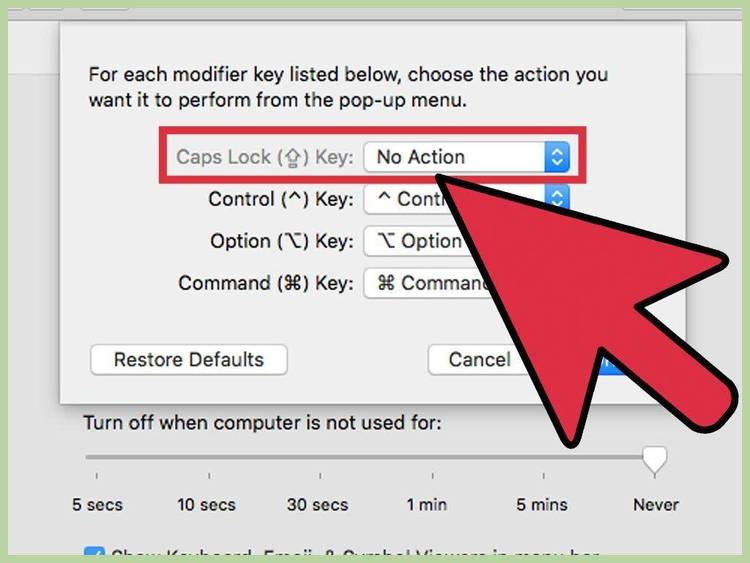 Contents of the CAPSLOCK.DOC file


DESCRIPTION
DESCRIPTION
-----------
CAPSLOCK makes your Caps Lock key reign supreme over the Shift
keys. When your Caps Lock is ON, CAPSLOCK ensures alphabetic keys
are typed in upper case even when using the Shift key. This pre-
vents annoyances like: eVERY gOOD bOY dESERVES fAVOR ! A simple
key press turns CAPSLOCK's action OFF / ON at will. When OFF typ-
ing behaves exactly as originally designed. As a secondary func-
tion, CAPSLOCK optionally presets all the keyboard toggle keys to
your preferences when you install it. CAPSLOCK is memory resident
but consumes less than 1K byte of your precious memory.

CAPSLOCK reports the status of each toggle key and an installed
message, and returns to DOS. That's all there is to it. CAPSLOCK
and your system are now ready for use. You may need to explicitly
specify the path to the directory you keep CAPSLOCK.COM if DOS is
unable to find it.

When you power up, you can additionally use CAPSLOCK to initialize
your toggle keys the way you like them. Those of you who learned
to use the numeric key pad as a cursor key pad with Number Lock
OFF, and then upgraded to a new machine which boots up with the
Number Lock ON, will find this handy! To preset a toggle key when
you install CAPSLOCK, add one or more of the indicated switches to
the CAPSLOCK command line:

If you accidentally specify something that CAPSLOCK doesn't under-
stand, it does not go resident. Instead, it beeps the speaker and
automatically displays a help screen.

To install CAPSLOCK automatically without fuss and bother, add a
CAPSLOCK command with or without options to your AUTOEXEC.BAT file.


USING CAPSLOCK
USING CAPSLOCK
--------------
CAPSLOCK always installs itself in the active state. You can acti-
vate or deactivate CAPSLOCK by pressing both left and right Shift
keys simultaneously. CAPSLOCK signals its mode change by chirping
to you. A down-chirp signals switching OFF, and an up-chirp sig-
nals ON. Don't mind if you don't get a chirp when attempting mode
changes in rapid fire. CAPSLOCK inhibits subsequent mode changes
made within a short time of the first.

If you just want to check the command line syntax for CAPSLOCK,
type:

This displays a help screen. CAPSLOCK never goes resident when it
displays its help screen.


CAVEATS
CAVEATS
-------
I was so intent on keeping the code short and sweet that I didn't
give CAPSLOCK enough smarts to tell if it's already installed! I
decided it wasn't worth it on the assumption that most people will
install CAPSLOCK automatically through their AUTOEXEC.BAT file at
start up and will not be concerned with it later. Running CAPSLOCK
without specifying the help option will load multiple copies in
memory. Multiple copies won't hurt anything. It just tends to
slow the machine down unnecessarily due to redundant program code
being executed. If you specify the /? or /H options, you can
safely run CAPSLOCK as many times as you wish without concern for
re-installing it.

An easy --after the fact-- way to tell if you have multiple copies
installed is to switch CAPSLOCK ON or OFF. Each copy will chirp to
you as they change modes. So if you hear more than one chirp...
well, you should reboot at the next opportunity and install CAPS-
LOCK once.


TECHNICAL STUFF
TECHNICAL STUFF
---------------
Before you feed this dandy little program to your machine, you
might like to know what it does. Did you know that keystroke data
sent to the computer from the keyboard is simply an arbitrary num-
ber assigned to the key pressed? One of the basic tasks the com-
puter does when a key is typed is to convert key numbers to mean-
ings for the keys. The computer also maintains the position status
for each toggle and shift key. For instance, when the computer
receives a key number corresponding to the [A] key, it checks
--among other things-- the Shift key position. If it is depressed,
it assigns "A" to the keystroke; and if not, "a" is assigned. The
converted keystrokes are then placed in a temporary holding space
(buffer), where they wait patiently for our programs to access
them.

A curse to many computer users is that the function of the Shift
key reverses when the Caps Lock is ON. That is, under the influ-
ence of the Caps Lock, Shift causes "a" to be assigned vice the
expected "A".

CAPSLOCK lets the computer process a keystroke any way its little
old BIOS code desires. But when it's done, CAPSLOCK go to work.
It checks the Caps Lock and if ON, checks the keystroke just put in
the buffer. If it's a lower case letter, it is converted to upper
case.

If CAPSLOCK detects both Shift keys depressed simultaneously, it
takes that key combination as a command to toggle its functioning
ON or OFF. If ON, it turns OFF, and vice versa. It's the ON/OFF
switch for CAPSLOCK. To avoid having to write a confirmation mes-
sage on top of your application's screen, it enlists the services
of the computer's speaker. It signals its new status by chirping
to you. When it turns ON, it will chirp with an up-slide tone.
When it turns OFF, a down-slide.

The newer keyboards send additional data not related to a keystroke
to the computer. CAPSLOCK must ignore this data during mode
changes. To accommodate these keyboards, CAPSLOCK locks out mode
changes within 0.66 seconds of a previous one.

To do its job, CAPSLOCK must attach itself in series with the
internal data path of characters streaming from your keyboard.
It's the same place that so may other Terminate-and-Stay-Resident
utilities hook on to. Since they all converge at this same place,
a pecking order may need to be established. Some experimentation
may be necessary to find a load order that is acceptable to all
concerned. Try to install CAPSLOCK as early as possible before
the others. Any memory resident programs that are installed before
CAPSLOCK will have access to keystrokes before CAPSLOCK does its
duty.