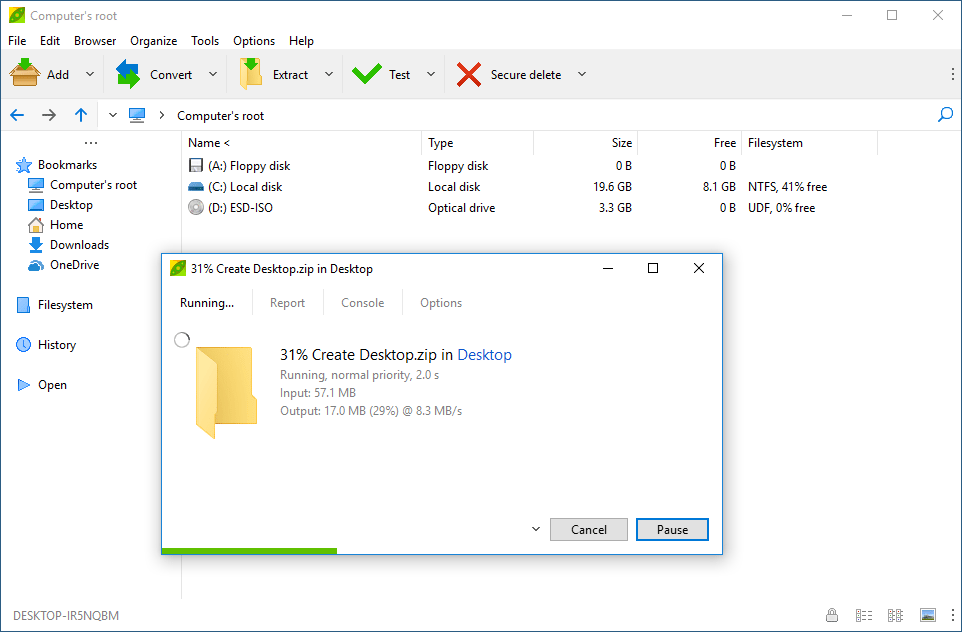 Contents of the ATOZ.DOC file

ATOZ is a public domain program for MS-DOS that helps convert archives in
other formats into ZOO format. For each source archive to be converted,
Atoz first invokes an external program (e.g. PKXARC.COM, ARCE.COM, or
LUE.COM) to extract files from the source archive. Then it invokes Zoo to
create a Zoo archive from the extracted files.

Atoz's built-in safeguards give you full control over whether or not to
proceed with creation of a Zoo archive after files have been extracted from
each source archive. After each set of files has been extracted, you may
escape to DOS and examine the resulting files to make sure that extraction
occurred without errors.

Optionally you can tell Atoz not to wait for your permission after extrac-
ting each source archive, allowing you to convert a large number of files as
an unattended job.

You can also ask Atoz to test the integrity of each Zoo archive after it is
created, by invoking Zoo to extract all files from it.

Avoid trying to convert your only copy of an archive so that if something
goes wrong, valuable data are not lost.

For the following example let's assume you are converting from ARC format
and you are using PKXARC.COM to perform the extraction. To convert LBR
format files simply replace "ARC" by "LBR" in the following discussion and
use LUE instead of PKARC.


1. Converting on a Hard Disk

Make sure that all three of the following programs are in a subdirectory
included in your DOS PATH variable so that they can be invoked from anywhere
on the disk: ZOO.EXE, ATOZ.EXE, and the extraction program (PKXARC.COM for
this example).

Create two empty subdirectories anywhere on the disk. One will hold the
source files to be converted and also the newly-created Zoo archives. The
other will serve as a scratch area for Atoz. For this example, we will use
C:\SCR as a scratch area and we will let C:\TMP hold archives to be
converted.

Into C:\TMP, copy all the *.ARC format archives that you wish to convert.

Now from the DOS prompt type the command

This tells Atoz to convert all files matching C:\TMP\*.ARC, to use C:\SCR as
a scratch directory, and to invoke PKXARC for extraction. Now proceed to
step 3.


2. Converting on a Floppy-Only System

Two disk drives are recommended. (You can also perform the conversion on a
one-disk system by creating subdirectories as with a hard disk.)

Into one disk drive (let's assume it's B:) put a blank formatted floppy
disk. ATOZ will use this as a scratch area.

Into the other disk drive (drive A: for this example) put a disk containing
the following files: (a) ATOZ.EXE; (b) ZOO.EXE; (c) the program to ex-
tract files from *.ARC archives (PKXARC.COM for this example); and (d) all
the ARC format files to be converted.

To avoid disk full errors, there must be enough free space remaining on disk
A: to hold the Zoo archives that will be created.

If you do not have a DOS PATH set, give the following command:

which tells DOS to search drive A: for programs to run, even if the current
disk happens to be B:.

Now from the DOS prompt type the command

This tells Atoz to convert all files matching A:*.ARC, to use disk B: as a
scratch disk, and to invoke PKXARC to perform the extraction. Now proceed
to step 3.

Conversion proceeds as follows. For each matching source archive, Atoz
invokes the extraction program (here PKXARC) to extract that archive. Then
Atoz asks for permission from you to create a Zoo archive from the extracted
files. Type "Y" to tell Zoo to proceed with the creation of a Zoo
archive or "N" to tell it to skip this particular set of extracted files but
proceed with the next matching source archive.

At this point you can also type "D" to get a directory of the extracted
files or "S" to get a DOS shell. From the DOS shell you may give any DOS
command as usual. Type "exit" to return to Atoz.

Note: To get the directory or to spawn a DOS shell, Atoz must be able to
find the command interpreter COMMAND.COM. Ordinarily, this means that the
drive from which you originally booted the system must have a disk
containing a copy of COMMAND.COM. This can pose a problem only for floppy-
only uses and the solution is to make sure that the disk in drive A:, used
to hold the archives to be converted, also contains holds COMMAND.COM.

If memory is tight on your floppy-only system, you may find that the pres-
ence of COMMAND.COM on the boot disk is necessary even if you never
request a directory listing or invoke a DOS shell. This is a special
feature of some IBM-specific versions of DOS. (In technical terms: a. Atoz
uses the COMSPEC environment variable to find the command interpreter.
b. Some versions of DOS require the transient portion of COMMAND.COM to be
in memory in order to execute a new process.)

Capitalized words above are typed exactly as shown above (either in upper-
case or lowercase) or abbreviated to a hyphen plus enough letters to unique-
ly identify the word. Thus -SOURCE may be written as -SOURC or -SOU or -S
etc. -TEMPORARY could be abbreviated to -TEMPOR or -TEMP or -TEM etc. but
not to -TE since that could also mean -TEST.

[-SOURCE] filespec
Specifies which file(s) to convert to Zoo format. May contain the
usual wildcards "*" and "?". The switch -SOURCE may be omitted but
a filespec must be present.
-TEMPORARY tempdir
Name of an empty temporary (scratch) directory. It is an error for the
scratch directory to be not empty. If the scratch directory is not
specified on the command line, Atoz uses the value of the environment
variable ATOZ$TEMP. If ATOZ$TEMP is not defined Atoz will also look
for the environment variables TEMP, TMP, ARCTEMP, and PKARCTMP in that
order and use the first one found.
-PROGRAM progname
Name of program to run to extract source files. If the name of the
program is not specified on the command line, Atoz uses the value of
the environment variable ATOZ$PROG. Note: if the extraction program
requires any parameters, e.g. "arc x", it cannot be specified on the
command line but may be specified as the value of ATOZ$PROG, e.g. with
the DOS command "SET ATOZ$PROG=ARC X".
-WAIT or -NOWAIT (default is -WAIT)
Whether to ask permission before creating each Zoo archive. After the
program invoked to extract files from the source archive has finished
execution, Atoz prints a message on the screen and waits for confirma-
tion from you before creating a Zoo archive. At this point, you may
type "Yes" or "Y" to give Atoz permission to proceed with the creation
of a Zoo archive. However, if you observed an error occur during
extraction, you may type "No" or "N" to skip this set of extracted
files. You may also type "D" to see a directory listing of the extrac-
ted files, or "S" to invoke a DOS shell, before deciding whether to
answer Yes or No.
-BELL or -NOBELL (default is -BELL)
Whether to beep when asking permission.
-RENAME or -NORENAME (default is -RENAME)
Whether to rename a source file to *.BAD if it could not be properly
converted to a Zoo archive.
-TEST or -NOTEST (default is -NOTEST)
Whether to invoke Zoo to test each created Zoo archive by extracting
all files from it.
-HELP
Gives a detailed help message.

Defaults may be changed by setting environment strings as "ATOZ$x=Y" or
"ATOZ$x=N" where x is WAIT, BELL, RENAME, or TEST. For example, the envi-
ronment string ATOZ$RENAME=N changes the default to NORENAME. Note that
parameters typed on the command line take precedence over any environment
variables. An additional environment variable ATOZ$CMD lets you specify
how Zoo should be invoked. If ATOZ$CMD is not set, the command "a" is
used, and Zoo is therefore invoked as "zoo a ...". For example:

Example 1:
To convert files to zoo format without any compression:

Give the command "set ATOZ$CMD=af" was given to MS-DOS. The value of
the environment variable is "af" and the command used to invoke Zoo
will be "zoo af ...", thus causing files to be added to the newly-
created Zoo archive without compression.

Example 2:
To convert all ARC format files in directory C:\TMP, using C:\SCR as a
scratch area and using PKXARC to extract files, without beeping, and
with each Zoo archive being tested after creation:

To decrease the amount of typing, we could set environment variables
thus, either from the keyboard or from our AUTOEXEC.BAT file:

If this has been done, the above command could be typed more briefly
as:

or, since the switch -SOURCE may be omitted, simply as:

None of the fast archive/library extraction programs that I know of (except
Zoo and Looz) correctly returns an error code if it detects an error, such
as a CRC error, during extraction. For this reason, Atoz cannot usually
know whether or not extraction of files from the source archive was success-
ful and must rely upon you, the user, to tell it. If you are confident that
no errors will occur during extraction of any of the specified source ar-
chives, you may set the environment string ATOZ$WAIT=N or give the -NOWAIT
switch on the command line.

Regardless of the -NOWAIT and -NOBELL switches, Atoz will always beep,
inform you, and wait for your permission to go ahead, if an executing
program does return an error status.