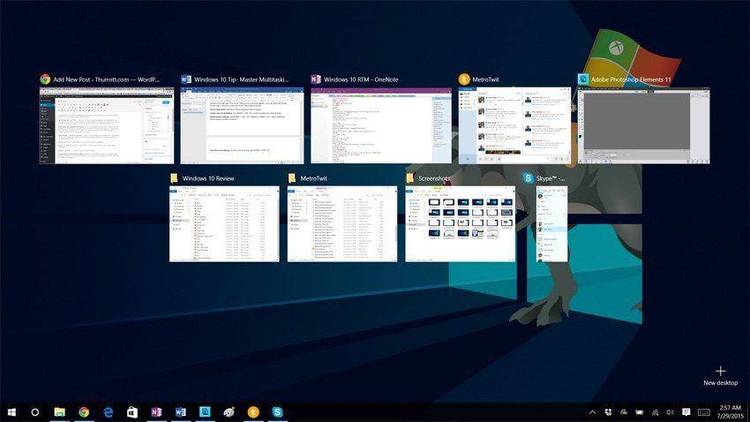 Contents of the VDESKTOP.WRI file

The virtual desktop window lets you manage the virtual desktop. It displays a scaled-down version of the entire desktop and shows you graphically where your windows are and what part of the desktop your display is currently viewing. The color of the background in this window will be the same color as your Windows desktop (however bitmaps on your desktop are not displayed in the window).

The current view rectangle is displayed as an outline in the highlight color. If grid alignment is enabled (see Setting Options), the grids are displayed as dotted lines in the window frame color.

You may move application windows with the left mouse button. Position the mouse pointer over the window you want to move, press the left button, drag the window, and release the button. A rectangle will be shown as you drag the mouse showing you where the window will go. Also, the caption of the virtual desktop window will display "Moving xxxxx" where xxxx is the name of the window. The window will move to its new position as soon as the mouse button is released. With icons, you may drag either the caption or the icon and both will move. Note that these are actually separate windows!

Virtual desktop options may be set using the Set Options item on the Virtual Desktop system menu. The system menu is the one with the horizontal bar in it in the upper left-hand corner. All user controlled options are stored in vdesktop.ini in your Windows directory. The options over which you have control, and the effect of there settings is discussed below.

Virtual Desktop SizeThe width and height settings determine the number of times wider and higher the virtual desktop will be than your Windows desktop. Both settings must fall in the range 1-8. This option defaults to 4 wide by 4 high.

Align Windows within n PixelsThis option only works when Align Desktop to Grid is also selected. Setting a non-zero number here causes windows that are positioned using the virtual desktop to be aligned to the nearest grid boundary when close enough. Vertical and horizontal alignment are independent, you can be close enough to one and not the other. This number is expressed in display pixels, a the default setting of 5 usually works well.

Keep Virtual Desktop in FrontThis option, when enabled, causes the virtual desktop window to stay in front of other windows, even when they are active. This option defaults to disabled.

Update Desktop each n msecsThis option determines how often the virtual desktop application examines the state of the virtual desktop and updates its window. Too large a number will make the display slow to respond to virtual desktop changes, and too small a number may have an effect on the performance of your other applications. Values entered here must be at least 50 msecs (update 20 times a second). The default setting of 500 msecs (twice a second) is suggested.

Move windows to desktop on exitThis option, when enabled moves all of the windows and icons that are not currently visible in the Windows desktop to the the upper left hand corner of the desktop when the Virtual Desktop application is exited. This prevents you from leaving windows off of the screen. The default setting is enabled.

Desktop PositionThe desktop position is considered an option by the Virtual Desktop software, even though there is no corresponding control in the options dialog box. Use the border of the window to size the window to your liking, and the title bar to move it where you want. The default setting for position is the middle of the Windows desktop and half of the Windows desktop size. You will almost certainly want to change this setting.

The desktop options may be saved using the Save Setup item on the System Menu. These saved options will be used the next time the desktop is run. The Virtual Desktop does NOT automatically save these settings on exit. This is deliberate, it is too easy to mess up the desktop position accidentally with a tile or cascade command in Windows.

It is recommended that you never close the virtual desktop application. If you do, other application windows may or may not end up being visible on the Windows Desktop.

If the move windows to desktop on exit option is enabled, the Virtual Desktop program will guarantee that all windows are visible after exiting by moving any window that is entirely off the screen to the upper-left hand corner of the desktop.

If you do not desire this behavior, the option can be disabled. Note, however, that this may leave windows off of the desktop with no way of getting to them other than using the task manager's tile or cascade commands. It is even possible to end up with no windows on the screen. In this case, the task manager can be activated by double-clicking the desktop with the left mouse button or by pressing Ctrl-Esc making its tile and cascade commands accessible.

Try running a N by 1 window in the lower right corner of the Windows Desktop. Four wide by one high works fairly well. Minimize all but one of your applications, the tile the desktop using the task manager. Fit the desktop window into the space at the right end of the row of icons. Set the other options to your taste. Once comfortable with your settings, save them. Then edit you win.ini file in the c:\windows directory to include the vdesktop executable as something run on startup. It will always come up in the same position with the same options set. Here's the line to edit:

Where: c:\vdesktop\ is assumed to be the path to your executable
xxxx,yyyy are other applications that may already in the command.

oWhen a new window was activated by a mouse click, and a virtual desktop move was deemed necessary by the virtual desktop program, the newly activated windows would end up in the wrong place. This was caused by competition between the mouse moving the window and the desktop moving the window. This was corrected by not allowing the desktop to move if any part of the newly active window is on the screen. If it is not on the screen, the mouse can't have activated it.
oA new method of changing active windows was added. By double-clicking the left button on a window in the desktop, it becomes active. In this case, the virtual desktop can be moved even if the window is partially visible on the current desktop.