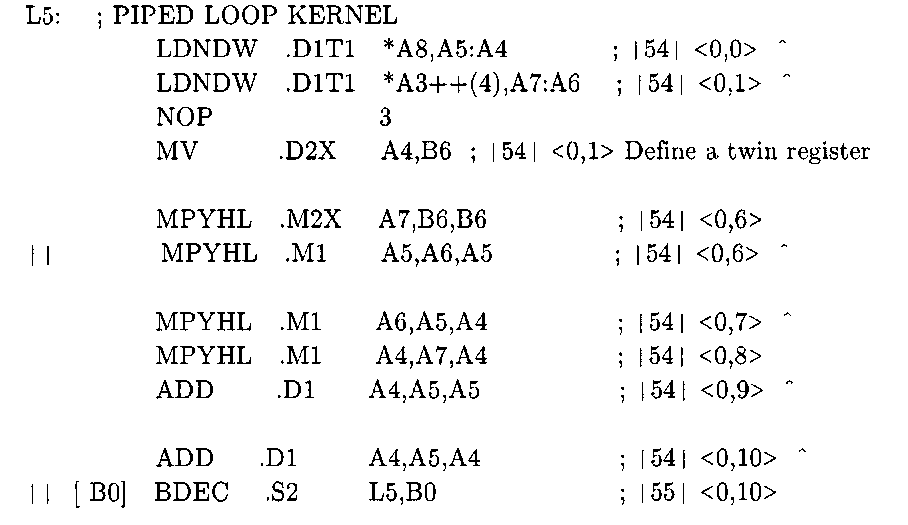 Contents of the DMA.TXT file

Consider the problem of moving a large amount of data to or from an I/O
device. This requirment is commonly encountered in the operation of many
peripheral devices (disk drives, for example) that are constantly moving
large amounts of data into and out of memory. An ovious way of making
the transfer would be a short program which for an input operation might
read a byte from the I/O port into the accumulator (AX register) of the
8088 processor, and then move the data from the AX register to a memory
location to store it. In addition, we have to keep track of the memory
locations where the data is going. By far the simplest way of handling
this is to lay the data down in continuous blocks locations within a block
of memory, using one of the processor's index registers to control the
address. Each time a byte is transfered, the index register(usually the
DI or Destination Index register) is incremented or decremented to point
to the next location. A typical example assembly language program to do
this might be as follows:

The opposite oeration of transfering data from memory to an I/O port is
essentually similar. The numbers in parentheses following the READ: label
are the number if processor clock cycles required to execute each instruction,
with a total of 37 processor clock cycles required to execute the entire
read segment. On a standard IBM PC, the clock runs at 4.77 MHz, corresponding
to a clock cycle period of 210 nanoseconds, and the loop takes 37 cycles or
7.8 microseconds to execute. This would be the fastest we could transfer each
byte. Note also the following:

1. The processor is tied up 100% of the time in transferring data; it cannot
execute any other part of the program while the transfer is underway.

2. The rate at which the data is transferred is controlled by the processor
clock and may not correspond to the rate at which the I/O device wants
to handle the data. This can be circumvented by polling the I/O device
to see if it is ready, or having the I/O device generate a hardware
interrupt; but either of these adds further code to the routine which
will slows down the transfer rate even further. In practice because of
all the stacking of registers that occurs when a hardware intrrupt is
processed, it is impossible to handle data transfers rates much above
5 to 10 Khz using interrupts.

3. If the processor has to handle an interrupt from one device while it is
involved in handling a data transfer to another device then the delays
involved may cause it to miss data, or at least will cause the
discontinuitly in the data flow.


It would be nice to have a way of transferring data without involving the
processor so it can be freed up as much as possible to attend to execution
of the program. It wouldalso be a plus if we could speed the transfer rate
up and be able to control the rate easily. Since all we want to do is move
a byte directly to/from an I/O port from/to memory without any sort of
processing on the way, we are better off not using the processor at all, but
instead proving special hardware that will accomplish this commonly required
task. The process of connecting an I/O device directly to memory is known
as Direct Memory Access (D.M.A.), and the hardware that controls this process
is known as the D.M.A. controller, which the case of the IBM PC is the function
of the 8237 chip on the system board.

THE MECHANICS OF A D.M.A. TRANSFER

What happens when a device wants to transfer data to/from memory? The first
step is for the device to send a signal known as a D.M.A. REQUEST (DREQ for
short) to the D.M.A. controller. The processor normally has control of the
computer's address and data busses as well as control signals such as memory
read/write (MEMR & MEMW) and I/O read/write (IOR & IOW) lines. To accomplish
a D.M.A. transfer, control of these lines must be passed to the D.M.A.
controllers. On receipt of the DREQ, the D.M.A. controller in turn issues
a HOLD REQUEST to the processor. As soon as it is able to, when it has
partially completed the instruction it is currently executing, the processor
issues a HOLD ACKNOWLEDGE signal to the D.M.A. controller, and simultaneously
disconnects itself from the address, data and control busses. This process
is technically known as "TRI-STATING" as the connections to the processor
assume a third, open circut state, compared to thier usual binary states of
1's and 0's or highs and lows. On receipt of the HOLD ACKNOWLEDGE, the D.M.A.
controller goes to work. It realeases its own connections to the address and
control busses from thier tristate condition, asserting a valid memory address
from an internal counter and then issues a D.M.A. ACKNOWLEDGE (DACK) signal
to the I/O device followed by a simultaneous IOW and MEMR for data outpu, or
IOR and MEMW for input. The perepheral in turn responds to the DACK and IOR
or IOW signals by placing or recieving data on the data buss effecting a
transfer directly to/from meory. On completion of the MEMR/IOW or MEMW/IOW
from the D.M.A. controller, the controller removes DACK, releases HOLD
REQUEST, tristates its own address and control lines, and increments or
decrements its internal address counter ready for the next transfer. The
processor in turn regains control of the busses, continuing execution execution
of the next instruction. From the assertion of the DREQ to completion of the
cycle takes about 2 to 5 microseconds, depending on the length of the
instruction that the processor happens to be engaged in on receipt of the
DREQ. The accual amount of time between instructions that the processor
loses the buss to the D.M.A. controler is even less, about 1 microsecond.
The effect on program execution is minimal even when transferring data at
very high rates which can approach 350,000 bytes/sec on the IBM PC. To
prevent the D.M.A. controller from 'hogging' the busses if the DREQ is
held constantly high, the controller always allows the processor to perform
at least part of an instruction between each D.M.A. transfer, so that even
operating "flat-out", D.M.A. cannot grab much more than 30% of the buss
bandwidth.

In order to perform D.M.A. operations, the perpheral must include hardware
that generates the DREQ and responds to the DACK. The D.M.A. controller, on
the other hand, is a system component that is a standard feature of the IBM PC
architecture. Most compatibles also include the D.M.A. controller, with the
execption of the TI Professional.

It is important to appreciate that the D.M.A. controller sets the dunamics
of the D.M.A. transfer, that there is nothing in the peripheral I/O device
that can alter the maximum speed at which the controller will handle data.
There are some surpising side effects of this, in particular the IBM PC/AT,
which is genrally 3 times faster than a standard PC or PC/XT, is actually
slower at D.M.A. transfers because its controller operates at 3 MHz instead
of 4.77 MHz on the PC. On the other hand, it can also perform 16-bit
transfers on its extended data buss, as well as 8-bit transfers on PC
compatible section of its data buss which with the right hardware can make
up for the slower transfer rate. Although they can operate in D.M.A. mode
in the PC/AT, many boards perform word (16-bit) transfers by making two
sequential byte (8-bit) and so are unable to take advantage of the AT's
extended buss; this being the price paid for PC compatibility.

Although we have discussed the operation of a single device using the D.M.A.,
it is custom to cater to the needs of several devices by providing several
D.M.A. channels, each one dedicated to a peticualar device. The 8237 provides
four seperate D.M.A. channels, known as levels 0 through 3. Correspondingly,
there are 4 D.M.A. request lines, DACK 0-3. These lines are prioritized
according to two possible protocols set by a bit in the controller command
register, either fixed priority, either fixed priority where lower D.M.A.
levels have higher priority than higher levels, or rotating priority, where
each level takes turn at having the highest priority. The PC BIOS sets the
8237 to operate in fixed priority mode on power up, and it is inadvisable
to change this. The PC/AT adds to the number of D.M.A. channels by using
two 8237 D.M.A. controllers. Since one channel is used to cascade one
controller into the other, this is acually adds an additional 3 channels,
all of which appears on the 16-bit additional expanision connectors of the
PC/AT and dedicated to 16-bit transfers.

Apart from its uses for high speed data transfer, the D.M.A. controller
includes counter hardware that cycles through the memory addresses, so as a
byproduct of its design, it can also be used to refresh dynamic memory, saving
the cost of a separate memory refresh controller. This is what IBM chose to
do in the PC, and on all models Level 0 performs this function with the
DREQ being driven from counter 1 of the 8253 timer at a 15 microsecond
intervals. The complete assignmentes for the levels are as follows.

For all machines, these levels are capable of 8-bit transfers:

For the PC/AT only, these levels are capable of 16-bit transfers: