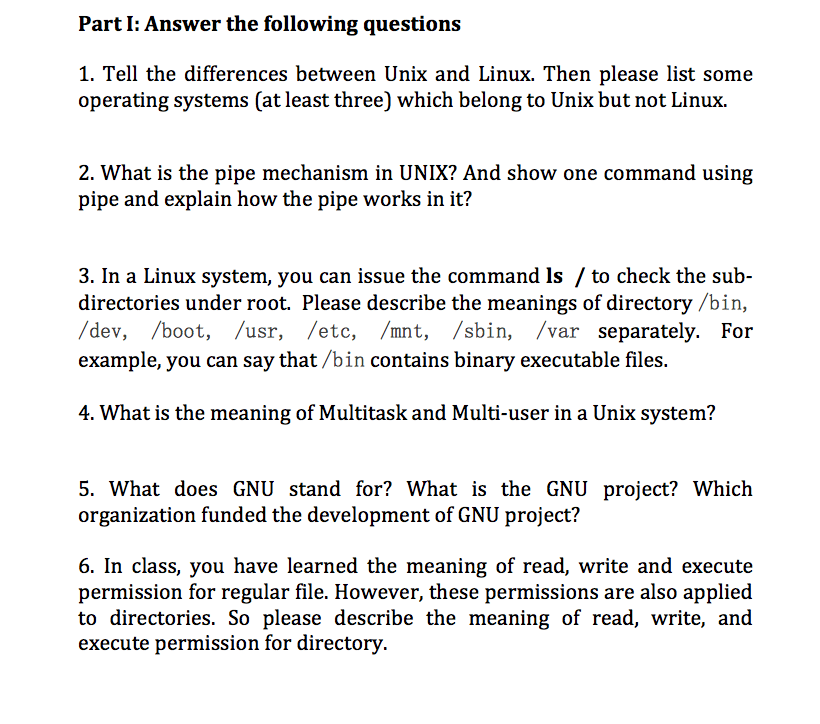 Contents of the UNIXFAQ.DOC file

This article contains the answers to some Frequently Asked Questions
often seen in comp.unix.questions. Please don't ask these questions
again, they've been answered plenty of times already - and please don't
flame someone just because they may not have read this particular
posting. Thank you.


This article includes answers to:

0) Who helped you put this list together?
1) How do I remove a file whose name begins with a "-" ?
2) How do I remove a file with funny characters in the filename ?
3) How do I get a recursive directory listing?
4) How do I get the current directory into my prompt?
5) How do I read characters from a terminal without requiring the user
to hit RETURN?
6) How do I read characters from the terminal in a shell script?
7) How do I check to see if there are characters to be read without
actually reading?
8) How do I find the name of an open file?
9) How do I rename "*.foo" to "*.bar", or change file names
to lowercase?
10) Why do I get [some strange error message] when I
"rsh host command" ?
11) How do I find out the creation time of a file?
12) How do I use "rsh" without having the rsh hang around
until the remote command has completed?
13) How do I truncate a file?
14) How do I {set an environment variable, change directory} inside a
program or shell script and have that change affect my
current shell?
15) Why doesn't find's "{}" symbol do what I want?
16) How do I redirect stdout and stderr separately in csh?
17) How do I set the permissions on a symbolic link?
18) When someone refers to 'rn(1)' or 'ctime(3)', what does
the number in parentheses mean?
19) What does {awk,grep,fgrep,egrep,biff,cat,gecos,nroff,troff,tee,bss}
stand for?
20) How does the gateway between "comp.unix.questions" and the
"info-unix" mailing list work?
21) How do I "undelete" a file?
22) How can a process detect if it's running in the background?
23) How can an executing program determine its own pathname?
24) How do I tell inside .cshrc if I'm a login shell?
25) Why doesn't redirecting a loop work as intended? (Bourne shell)
26) How do I use popen() to open a process for reading AND writing?
27) How do I run 'passwd', 'ftp', 'telnet', 'tip' and other interactive
programs from a shell script or in the background?
28) How do I sleep() in a C program for less than one second?
29) How can I get setuid shell scripts to work?
30) What are some useful Unix or C books?
31) How do I construct a shell glob-pattern that matches all files
except "." and ".." ?
32) How do I find the last argument in a Bourne shell script?
33) How can I find out which user or process has a file open or is using
a particular file system (so that I can unmount it?)
34) How do I keep track of people who are fingering me?
35) How do I find out the process ID of a program with a particular
name from inside a shell script or C program?
36) What happened to the pronunciation list that used to be
part of this document?


If you're looking for the answer to, say, question 14, and want to skip
everything else, you can search ahead for the regular expression "^14)".

While these are all legitimate questions, they seem to crop up in
comp.unix.questions on an annual basis, usually followed by plenty
of replies (only some of which are correct) and then a period of
griping about how the same questions keep coming up. You may also like
to read the monthly article "Answers to Frequently Asked Questions"
in the newsgroup "news.announce.newusers", which will tell you what
"UNIX" stands for.

With the variety of Unix systems in the world, it's hard to guarantee
that these answers will work everywhere. Read your local manual pages
before trying anything suggested here. If you have suggestions or
corrections for any of these answers, please send them to to
[email protected] or iuvax!sahayman.

I owe a great deal of thanks to dozens of Usenet readers who submitted
questions, answers, corrections and suggestions for this list. I'd
especially like to thank Maarten Litmaath and Guy Harris, who have both
made many especially valuable contributions.

Figure out some way to name the file so that it doesn't
begin with a dash. The simplest answer is to use

(assuming "-filename" is in the current directory, of course.)
This method of avoiding the interpretation of the "-" works
with other commands too.

Many commands, particularly those that have been written to use
the "getopt(3)" argument parsing routine, accept a "--" argument
which means "this is the last option, anything after this is not
an option", so your version of rm might handle "rm -- -filename".
Some versions of rm that don't use getopt() treat a single "-"
in the same way, so you can also try "rm - -filename".

2) How do I remove a file with funny characters in the filename ?

If the 'funny character' is a '/', skip to the last part of
this answer. If the funny character is something else,
such as a ' ' or control character or character with
the 8th bit set, keep reading.

The classic answers are

which asks you whether you want to remove each file matching
the indicated pattern; depending on your shell, this may
not work if the filename has a character with the 8th bit set
(the shell may strip that off);

which asks you whether to remove each file in the directory.
Answer "y" to the problem file and "n" to everything else.
Unfortunately this doesn't work with many versions of rm.
Also unfortunately, this will walk through every subdirectory
of ".", so you might want to "chmod a-x" those directories
temporarily to make them unsearchable.

Always take a deep breath and think about what you're doing
and double check what you typed when you use rm's "-r" flag
or a wildcard on the command line;

where "..." is a group of predicates that uniquely identify the
file. One possibility is to figure out the inode number
of the problem file (use "ls -i .") and then use


"-ok" is a safety check - it will prompt you for confirmation of the
command it's about to execute. You can use "-exec" instead to avoid
the prompting, if you want to live dangerously, or if you suspect
that the filename may contain a funny character sequence that will mess
up your screen when printed.

These files really are special cases, and can only be created
by buggy kernel code (typically by implementations of NFS
that don't filter out illegal characters in file names from
remote machines.) The first thing to do is to try to
understand exactly why this problem is so strange.

Recall that Unix directories are simply pairs of
filenames and inode numbers. A directory essentially
contains information like this:

Theoretically, '/' and '\0' are the only two characters that
cannot appear in a filename - '/' because it's used to separate
directories and files, and '\0' because it terminates a filename.

Unfortunately some implementations of NFS will blithely create
filenames with embedded slashes in response to requests from remote
machines. For instance, this could happen when someone on a Mac or
other non-Unix machine decides to create a remote NFS file on
your Unix machine with the date in the filename. Your Unix
directory then has this in it:

No amount of messing around with 'find' or 'rm' as described above
will delete this file, since those utilities and all other Unix
programs, are forced to interpret the '/' in the normal way.

Any ordinary program will eventually try to do unlink("91/02/07"),
which as far as the kernel is concerned means "unlink the file 07
in the subdirectory 02 of directory 91", but that's not what we
have - we have a *FILE* named "91/02/07" in the current directory.
This is a subtle but crucial distinction.

What can you do in this case?
The first thing to try is to return to the Mac that created this
crummy entry, and see if you can convince it and your local NFS
daemon to rename the file to something without slashes.

If that doesn't work or isn't possible, you'll need help from your
system manager, who will have to try the one of the following.
Use "ls -i" to find the inode number of this bogus file, then
unmount the file system and use "clri" to clear the inode, and
"fsck" the file system with your fingers crossed. This destroys
the information in the file. If you want to keep it, you can try:

create a new directory in the same parent directory as the one
containing the bad file name;

move everything you can (i.e. everything but the file with
the bad name) from the old directory to the new one;

do "ls -id" on the directory containing the file with the
bad name to get its inumber;

"clri" the directory containing the file with the bad name;

Then, to find the file,

move the file out of "lost+found" into the directory
with a better name.

Alternatively, you can patch the directory the hard way
by crawling around in the raw file system.
Use "fsdb", if you have it.


3) How do I get a recursive directory listing?

One of the following may do what you want:

ls -R (not all versions of "ls" have -R)
find . -print(should work everywhere)
du -a .(shows you both the name and size)

If you're looking for a wildcard pattern that will match
all ".c" files in this directory and below, you won't find one,
but you can use

"find" is a powerful program. Learn about it.

4) How do I get the current directory into my prompt?

It depends which shell you are using. It's easy with some shells,
hard or impossible with others.

C Shell (csh):
Put this in your .cshrc - customize the prompt variable
the way you want.

If you use pushd and popd, you'll also need

Some C shells don't keep a $cwd variable - you can use
`pwd` instead.


Some older csh's get the meaning of && and || reversed.
Try doing:

If you have a newer version of the Bourne Shell (SVR2 or newer)
you can use a shell function to make your own command, "xcd" say:

If you have an older Bourne shell, it's complicated but not impossible.
Here's one way. Add this to your .profile file:

and then put this executable script (without the indentation!),
let's call it "xcd", somewhere in your PATH