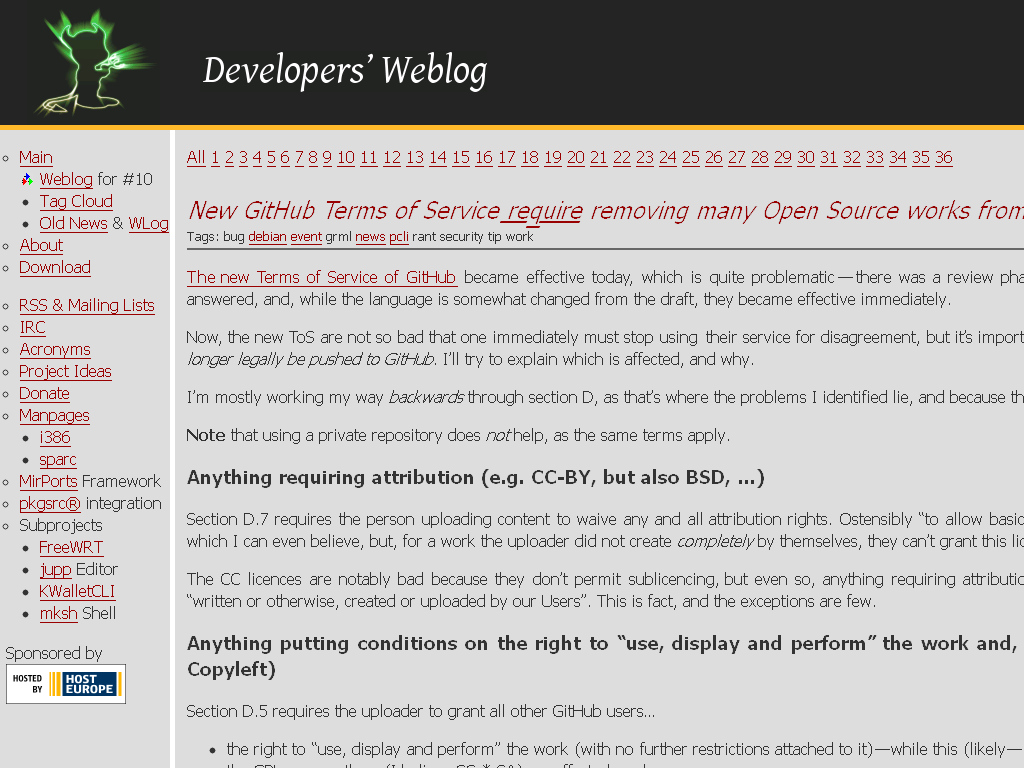 This file is part of RCS.

RCS is free software; you can redistribute it and/or modify
it under the terms of the GNU General Public License as published by
the Free Software Foundation; either version 2, or (at your option)
any later version.

RCS is distributed in the hope that it will be useful,
but WITHOUT ANY WARRANTY; without even the implied warranty of
MERCHANTABILITY or FITNESS FOR A PARTICULAR PURPOSE. See the
GNU General Public License for more details.

You should have received a copy of the GNU General Public License
along with RCS; see the file COPYING. If not, write to
the Free Software Foundation, 675 Mass Ave, Cambridge, MA 02139, USA.

Report problems and direct all questions to:

RCS requires a diff that supports the -n option.
Get GNU diff (version 1.15 or later) if your diff lacks -n.

Sources for RCS are in the src directory.
Read the directions in src/README to build RCS on your system.

Troff source for the paper `RCS--A System for Version Control', which
appeared in _Software--Practice & Experience_, is in rcs.ms.

If you don't have troff, you can get GNU groff to format the documentation.

RCS version 5 reads RCS files written by any RCS version released since 1982.
It also writes RCS files that these older versions of RCS can read,
unless you use one of the following new features:


Features new to RCS version 5.6 include:

Security holes have been plugged; setgid use is no longer supported.

When ci finds no changes in the working file,
it automatically reverts to the previous revision unless -f is given.

RCS is portable to hosts that do not permit `,' in filenames.
(`,' is not part of the Posix portable filename character set.)
A new -x option specifies extensions other than `,v' for RCS files.
The Unix default is `-x,v/', so that the working file `w' corresponds
to the first file in the list `RCS/w,v', `w,v', `RCS/w' that works.
The non-Unix default is `-x', so that only `RCS/w' is tried.
Eventually, the Unix default should change to `-x/,v'
to encourage interoperability among all Posix hosts.

RCS manipulates its lock files using a method that is more reliable under NFS.

Experimental support for MS-DOS and OS/2 is available as part of a separate
software distribution.


Features new to RCS version 5 include:

RCS can check in arbitrary files, not just text files, if diff -a works.
RCS can merge lines containing just a single `.' if diff3 -m works.
GNU diff supports the -a and -m options.

1. Setuid works fully if the seteuid() system call lets any
process switch back and forth between real and effective users,
as specified in Posix 1003.1a Draft 5.

2. On hosts with saved setuids (a Posix 1003.1-1990 option) and without
a modern seteuid(), setuid works unless the real or effective user is root.

3. On hosts that lack both modern seteuid() and saved setuids,
setuid does not work, and RCS uses the effective user for all accesses;
formerly it was inconsistent.

New options to co, rcsdiff, and rcsmerge give more flexibility to keyword
substitution.

-kkv substitutes the default `$Keyword: value $' for keyword strings.
However, a locker's name is inserted only as a file is being locked,
i.e. by `ci -l' and `co -l'. This is normally the default.

-kkvl acts like -kkv, except that a locker's name is always inserted
if the given revision is currently locked. This was the default in
version 4. It is now the default only with when using rcsdiff to
compare a revision to a working file whose mode is that of a file
checked out for changes.

-kv retrieves just `value'. This can ease the use of keyword values, but
it is dangerous because it causes RCS to lose track of where the keywords
are, so for safety the owner write permission of the working file is
turned off when -kv is used; to edit the file later, check it out again
without -kv.

rcs -ko sets the default keyword substitution to be in the style of co -ko,
and similarly for the other -k options. This can be useful with binary file
formats that cannot tolerate changing the lengths of keyword strings.
However it also renders a RCS file readable only by RCS version 5 or later.
Use rcs -kkv to restore the usual default substitution.

RCS can now be used by development groups that span timezone boundaries.
All times are now displayed in GMT, and GMT is the default timezone.
To use local time with co -d, append ` LT' to the time.
When interchanging RCS files with sites running older versions of RCS,
time stamp discrepancies may prevent checkins; to work around this,
use `ci -d' with a time slightly in the future.

Dates are now displayed using four-digit years, not two-digit years.
Years given in -d options must now have four digits.
This change is required for RCS to continue to work after 1999/12/31.
The form of dates in version 5 RCS files will not change until 2000/01/01,
so in the meantime RCS files can still be interchanged with sites
running older versions of RCS. To make room for the longer dates,
rlog now outputs `lines: +A -D' instead of `lines added/del: A/D'.

To help prevent diff programs that are broken or have run out of memory
from trashing an RCS file, ci now checks diff output more carefully.

ci -k now handles the Log keyword, so that checking in a file
with -k does not normally alter the file's contents.

RCS no longer outputs white space at the ends of lines
unless the original working file had it.
For consistency with other keywords,
a space, not a tab, is now output after `$Log:'.
Rlog now puts lockers and symbolic names on separate lines in the output
to avoid generating lines that are too long.
A similar fix has been made to lists in the RCS files themselves.

RCS no longer outputs the string `Locker: ' when expanding Header or Id
keywords. This saves space and reverts back to version 3 behavior.

RCS can now emulate older versions of RCS; see `co -V'.
This may be useful to overcome compatibility problems
due to the above changes.

Programs like Emacs can now interact with RCS commands via a pipe:
the new -I option causes ci, co, and rcs to run interactively,
even if standard input is not a terminal.
These commands now accept multiple inputs from stdin separated by `.' lines.


Descriptive text may be given directly in an argument of the form -t-string.

The character set for symbolic names has been upgraded
from Ascii to ISO 8859.

rcsdiff now passes through all options used by GNU diff;
this is a longer list than 4.3BSD diff.

rcsmerge and merge now have a -q option, just like their siblings do.

RCS now attempts to ignore parts of an RCS file that look like they come
from a future version of RCS.

When properly configured, RCS now strictly conforms with Posix 1003.1-1990.
RCS can still be compiled in non-Posix traditional Unix environments,
and can use common BSD and USG extensions to Posix.
RCS is a conforming Standard C program, and also compiles under traditional C.

Arbitrary limits on internal table sizes have been removed.
The only limit now is the amount of memory available via malloc().

Snooping has been removed.


Version 4 was the first version distributed by FSF.
Beside bug fixes, features new to RCS version 4 include:

The notion of default branch has been added; see rcs -b.


Version 3 was included in the 4.3BSD distribution.

Add format options for finer control over the output of ident and rlog.

Be able to redo the most recent checkin with minor changes.

Add a `-' option to take the list of pathnames from standard input.
Perhaps the pathnames should be null-terminated, not newline-terminated,
so that pathnames that contain newlines are handled properly.

Add general options so that rcsdiff and rcsmerge can pass arbitrary options
to its subsidiary co and diff processes. E.g.

If a user has multiple locks, perhaps ci should fall back on ci -k's
method to figure out which revision to use.

Symbolic names need not refer to existing branches and revisions.
rcs(1)'s BUGS section says this is a bug. Is it? If so, it should be fixed.

Clean up the source code with a consistent indenting style.

Update the date parser to use the more modern getdate.y by Bellovin,
Salz, and Berets, or the even more modern getdate by Moraes. None of
these getdate implementations are as robust as RCS's old warhorse in
avoiding problems like arithmetic overflow, so they'll have to be
fixed first.

Break up the code into a library so that it's easier to write new programs
that manipulate RCS files, and so that useless code is removed from the
existing programs. For example, the rcs command contains unnecessary
keyword substitution baggage, and the merge command can be greatly pruned.

Make it easier to use your favorite text editor to edit log messages,
etc. instead of having to type them in irretrievably at the terminal.

The following projects require a change to RCS file format,
and thus must wait until at least RCS version 6.

Be able to store RCS files in compressed format.
Don't bother to use a .Z extension that would exceed file name length limits;
just look at the magic number.

Add locker commentary, e.g. `co -l -m"checkout to fix merge bug" foo'
to tell others why you checked out `foo'.
Also record the time when the revision was locked,
and perhaps the working pathname (if applicable).

Let the user mark an RCS revision as deleted; checking out such a revision
would result in no working file. Similarly, using `co -d' with a date either
before the initial revision or after the file was marked deleted should
remove the working file. For extra credit, extend the notion of `deleted' to
include `renamed'. RCS should support arbitrary combinations of renaming and
deletion, e.g. renaming A to B and B to A, checking in new revisions to both
files, and then renaming them back.

Use a better scheme for locking revisions; the current scheme requires
changing the RCS file just to lock or unlock a revision.
The new scheme should coexist as well as possible with older versions of RCS,
and should avoid the rare NFS bugs mentioned in rcsedit.c.

Add frozen branches a la SCCS. In general, be able to emulate all of
SCCS, so that an SCCS-to-RCS program can be practical.

Be able to create empty branches.

Improve RCS's method for storing binary files.
Although it is more efficient than SCCS's,
the diff algorithm is still line oriented,
and often generates long output for minor changes to an executable file.

Add a new `-kb' expansion for binary files on non-Posix hosts
that distinguish between text and binary I/O.
The current `text_work_stdio' compile-time switch is too inflexible.
This fix either requires nonstandard primitives like DOS's setmode(),
or requires that `-kb' be specified on initial checkin and never changed.
From the user's point of view, it would be best if
RCS detected and handled binary files without human intervention,
switching expansion methods as needed from revision to revision.

Extend the grammar of RCS files so that keywords need not be in a fixed order.

Internationalize messages; unfortunately, there's no common standard yet.
This requires a change in RCS file format because of the
`empty log message' and `checked in with -k' hacks inside RCS files.

RCS was designed and built by Walter F. Tichy of Purdue University.
RCS version 3 was released in 1983.