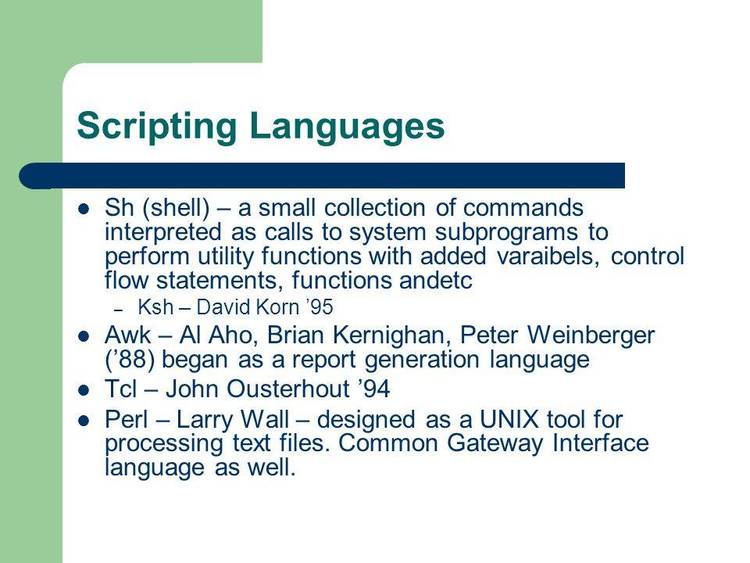 Contents of the PERL-RK2.TXT file

Last month, we covered PERL's three fundamental scalar data types: numeric,
boolean, and string. All references to scalar variables in PERL. are of the
form $name, where name is the variable's name. PERL resembles awk in that
variables are typed by their most recent assignment and require no previous
declaration. PERL uses print and printf for output.

PERL also has composite variables. Vectors are one-dimensional and are indexed
numerically from 0 (by default) with square brackets surrounding the index.
Single values (scalars or single-element vectors) are accessed with the $
(dollar-sign) prefix. Naming an array with an @ (at-sign) prefix references
the entire array.

PERL has a number of predefined variables (such as the current process ID and
a vector of invocation arguments).

PERL uses all of C's operators except the type-casting and address operators
(& and *). Additionally, PERL has exponentiation (**, **=), the range operator
(..), string concatenation (., .=), string repetition (x, x=), and (as does
the UNIX shell) file tests.

PERL has flow-control constructs very similar to those of C and awk (with the
exception that PERL lacks a case statement). Unlike C, however, PERL's control
constructs always require a set of enclosing braces. PERL uses next and last
instead of C's continue and break.

PERL can open files for reading, writing, or appending. Additionally, PERL can
open pipes (either for reading from or writing to). PERL has simple input
statements (such as <>) amd simple output (print) in addition to the standard
C-style printf statement.

PERL often uses the variable $_ as a default variable. When no specification
is made for the result of input operations, for example, the input goes to $_.
Functions for which arguments are omitted often operate on $_ (for example,
chop, the function that removes the last character of a string, will operate
on $_.

PERL's regular expressions are similar to those of egrep (a slightly more
powerful utility with a few syntactic quirks compared to grep). PERL's regular
expressions support ., *, [], and C-style escapes. New escapes include \w,
which matches alphanumerics and _ (the underscore), \d, which matches numeric
characters, \s, which matches white space, and \b, which matches word
boundaries. Capitalized versions of these letters (\W, \D, \S, and \B) match
their respective negations. Like egrep (and unlike grep), (), {}, and + do not
have to be escaped for their special meanings.

Use =~ and s for substitution:

Use =~ and y for translation;

With these two commands, PERL subsumes most of sed's and tr's abilities.

PERL sets three very useful variables after a match. These include:

Here is an example of these variables' use:

Using the =~ operator, PERL searches strings for a regular-expression match
(or search failure with the !~ operator). Here's an example that searches for
the string ous in two other strings:

which yields (not surprisingly):

PERL can access directories three different ways. The obvious way of finding
all the files with a .c extension is: