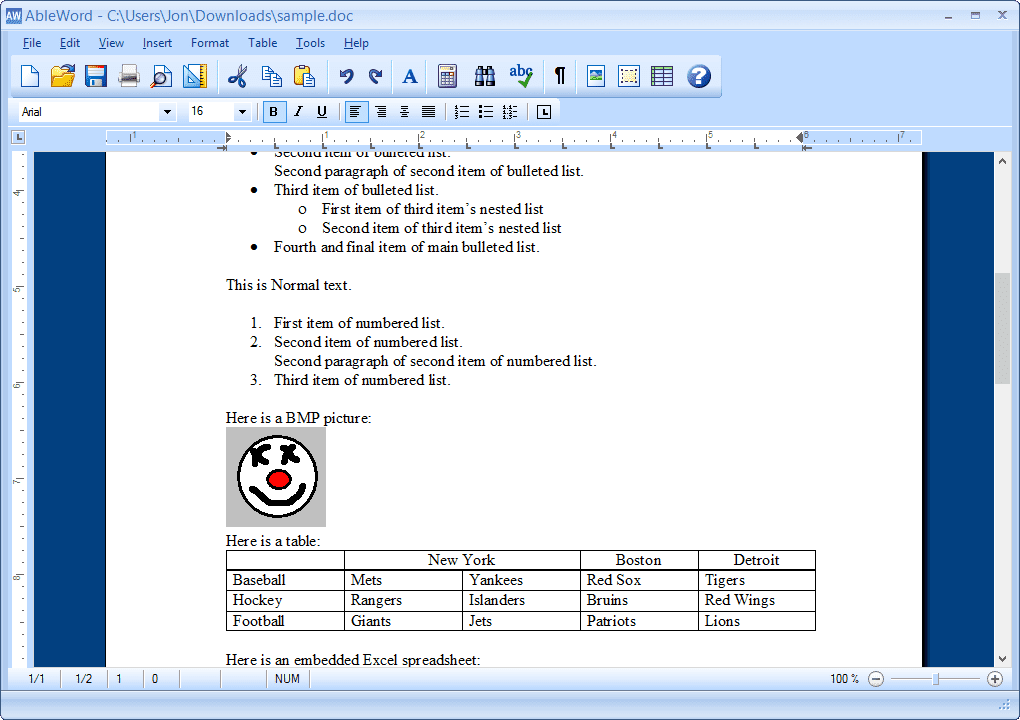 3-24-90
-------
TurboCALC(tm) v9.02 is now ready for release. This version is another
bug fix release. The main problem was centered around the printing of
labels that overwrote the columns to the right. This has now been
corrected.


11-26-90
--------
TurboCALC(tm) v9.01 is now ready for release. This version is a bug
fix release. Among other things, the [M]ove command was not working
properly in the worksheet module. It has been corrected.

No changes have been made to the text editor - which is a canned package
from Borland International and uses the WordStar command keys.

The changes to the spreadsheet fall into two catagories:

2. Interface changes. Mostly the new point and shoot interface to read and
store worksheets. But, in addition, a vertical hold, which allows the
top 10 lines of the screen to be held - similar to the previous
capabilites that allowed 4 columns to be held.

Here are the new functions:


DAY360 The DAY360 function computes the number of days between two
dates, based on a 360-day calendar year or 30 days per month.

The dates are in the normal serial date format.

VDB The VDB function calculates depreciation expense for a specific
period using a variable declining balance method. This function
differs from DDB in that the last function argument contains the
percentage, allowing you to control the percentage used in the
calculation. With DDB, the percentage is always 200%. Also,
this function switches to straight-line when straight-line would
be equal or greater. Finally, this function can compute
depreciation for periods other than a year at a time.

The last two items are optional and may be omitted. For example:

STDS The STDS function determines the sample standard deviation of a
set of values, for a sample of a population. If the entire
population is included in the values, the STD function should be
used.

VARS The VARS function determines the sample variance of a set of
values, for a sample of a population. If the values include
the entire population, use the VAR function.

CHAR Returns the character that corresponds to an ASCII code. For
example, CHAR(65) would return an 'A'.

CODE Returns the ASCII code that corresponds to a character. For
example, CODE("A") would return 65.

Note: When strings (of even 1 character) and given as parameters they should
be surrounded by "..." marks.

This would return a 0. Strings may be stored in cells and
referenced just like numbers. For example:

Would test the string value of cell A3 to see if it contained
the string "abc".

FIND The FIND function permits you to search a character string to
find out if a substring appears within it. If the substring
is found, the function returns the starting location of this
string.

The 'start-location' is the position in the 'entire-string'
where you wish to begin the search. The leftmost character
in the string is character 0.

The return value is ERR when the 'substring' is not found.

LEFT The LEFT function allows you to extract a specified number
of characters from the left side of a string.

LENGTH The LENGTH function returns the number of characters in a string.

LOWER The LOWER function converts a string to lowercase characters.

MID The MID function extracts characters from the middle of a string
when the number of characters and the starting location is
specified.

PROPER The PROPER function converts strings to proper case (a format
where the first letter of each word is capitalized).

REPEAT The REPEAT function is used to duplicate a character string
a specified number of times (up to a maximum of 80 characters
may be generated).

REPLACE The REPLACE function replaces characters in a string with other
characters.

RIGHT The RIGHT function allows you to extract a specified number of
characters from the right side of a string.

TRIM The TRIM function allows you to strip away extraneous blanks
from a string.

UPPER The UPPER function will convert input strings to all uppercase.

VALUE The VALUE function converts a string that looks like a number
into an actual numeric value.

would return the numeric value 1.5.


Strings may be manipulated using the '+' operator. For example:

is a valid formula. It could easily be re-written to strip the extra blank,
for example:

The final result would be "abcdef".

The maximum string size is 80 characters. Strings will be truncated to fit,
if necessary. Also, just about any cell may contain a string. Even if the
cell has a numeric value, it may be considered to contain a string, as the
string function will automatically convert the number to a string using the
formatting instructions you provide the worksheet.


Auto-Start
----------
Turbo CALC may now be started with the name of a SSF file on the command
line. For example:

When the program loads, it will automatically enter the spreadsheet and
load 'foobar.ssf'.

Each spreadsheet may additionally have an auto-start macro specified.
This is done by placing macro commands in the spreadsheet starting
in cell A1. To be properly recognized, these commands *must* begin with
the characters "~/", the "..." are not entered, naturally. If this
is done, then the program will automatically start this macro whenever
the spreadsheet is loaded.


7-25-89
-------
It has been awhile since the prior release of TurboCALC(tm). But here it is.
Version 8.11 is a bug fix release. Two small changes were made, the later
being the most signficant, i.e. a bug which caused the program to abnormally
terminate, thus losing the worksheet, has been corrected. This involves the
handling of multiplications which could create floating point overflow --
numbers are too big for the program to handle. This has now been corrected.
The program can handle numbers between 1.0E+37 and 1.0E-37, if a number
outside of the range is calculated, the "ERR" indicator now results.

1. New feature. Fixed column import. Users may now import data that
is fixed length fields. This is handy when the DIF format is not
available. The field lengths should match the column widths in Turbo
CALC, in this manner TurboCALC(tm) will know how wide each field is.

2. Whenever a wide area, greater than 80 columns, of blank space preceeded
a group of numbers, in printed output, the numbers would shift to the
left by a random number of columns. This has been fixed.

2-05-87
-------
Release 8.01 of TurboCALC(tm) is now ready. There were a couple of minor
bug fixes, for example the worksheet will now recalculate as soon as the
"autocalc" option is selected - to assure that the spreadsheet is up-to-date
whenever "autocalc" is selected.

Two new feature items are included in the release level.

1. It is now possible to select the "key" column for a sort, it no longer
must be the 1st column of the data range of the sort.

2. An option was added to the Alt-J command, so that a jump-to-cell can
now be done either by cell address or by cell content. For example:
one can now say "go to the cell that contains the value 1.52". Or
any other value for that matter. The value need not be numeric, it
can be a label as well. The F5 key is used to repeat the search
started with the Alt-J, so that you could locate all the cells that
contain 1.52, for example.


01-10-87
--------
Here is 8.00 of TurboCALC(tm). The release levels of TurboCALC(tm) have
been slow in coming because the program is becoming a mature product.
I do hope you find the new features rewarding:

1. Range Names. Now you can name a range or individual cell so that
you need not remember the cell address. For example you could refer
to your cashflow range with the name @CASHFLOW! This is very handy,
especially in conjunction with macros!

2. Macros. TurboCALC(tm) now supports macros, styled in the tradition of
the more expensive commercial spreadsheets. There are 30 macro keys
and they may refer to locations in the spreadsheet to allow macros
of virtually unlimited power.

3. The erase command has been expanded so that it is possible to erase
just a part of the worksheet, as well as being able to erase the entire
worksheet.

5. Color options in the edit module.

6. Save graph to disk file for later editing and/or printing.

Also, this release will auto recalculate after a row/column deletion, if
autocalc is turned on.


Bugs
----
Bugs are disgusting things. I hate 'em. Especially when I find them
in my programs. Well, I found one in TurboCALC(tm) and I killed it.
The result is release 6.31. The bug was located in the cell input area,
if the user attempted to revise a formula that was more than 13 positions
long, the program forgot that is was a formula and treated the result as
text. Not so nice! Well, I found it. But it makes me wonder, the bug
had gone unobserved for a long time. Why hasn't somebody said something?
I know, I am the only one who uses formulae longer than 13 positions!

Graphics
--------
With TC 6.30, graphics are being introduced. The program will now do
bar graphs, with up to 6 variables on display.

Now the program also supports an Environment variable for Hard Disk users,
so that TC can find its home directory without being there when started.
Put the following or similar in your AUTOEXEC.BAT file:

Assuming that you have TC and related files stored on drive C in the TC
directory. Use the appropriate drive and directory for your system.


Registration Plan
-----------------
With TC 6.20, a user registration plan is being introduced. All copies
of TC will now carry a serial #. The purpose of the serial # is to encourage
registration and contribution. When someone registers a copy of TC that
contains your registered serial #, we will split the contribution with you.
You will receive 25% of the contribution or $10 when the suggested amount is
received.

The suggested contribution has been increased, to $35. This is to cover the
expense of including an automatic upgrade in initial registration.

Finally, a suggested contribution has been decided upon for old users who
wish to upgrade, $10. Already registered users may send this contribution
and receive a registered copy of TC - one with their own serial number. This
will allow them to be able to obtain shares of contributions, just like the
newly registered folks.

1. The EDIT module will ask you to save the buffer if
you exit to the CALC module with the F2 key.

2. The CALC module handles the printer init string
correctly now. It had the habit of "eating" it
before.


Expanding the worksheet.
------------------------
With the appearance of the new "ExpressCalc"(tm) from Expressware, really
the old PC-Calc with a new name and some new features, the race to
increase the size of worksheets is on!

Expressware has increased the capacity of the old PC-Calc from 256x64 to
8192x2, and all variations thereof. This is pretty good. However you
arrange the cells, you get about 16,384 total cells. A brilliant achievement.

Now how about "TurboCALC"(tm) from P&M Software? Well, we are not to be
outdone. With version 6.10 of "TurboCALC"(tm), the worksheet can now have
the following dimensions, with some to spare:

One more new feature in this release: protected fields! Keeps you from
accidentally destroying a field. Use Alt-T to protect a field.


TurboCALC(tm) Editor News
-------------------------
With version 6.10, some bugs have been fixed, but the big news is that
the scrolling has been improved dramatically. In the original version,
6.00, the screen would scroll with a rippling effect, this has been
eliminated to a great degree.