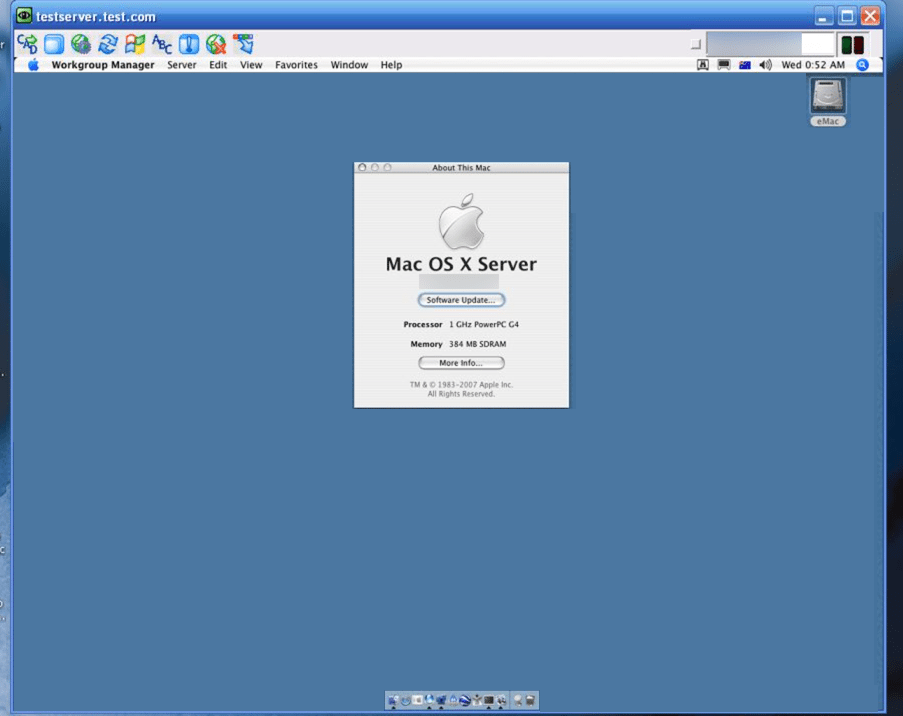 Contents of the DESKTOP.DOC file

PM Desktop is a simple application designed to enhance the OS/2 Presentation
Manager environment. PM Desktop is currently most useful for putting fancy
images on the desktop background and to generally impress and amaze your
friends with how cool OS/2 PM is. In the future, PM Desktop will provide
many more useful (and not so useful) enhancements to the PM environment.

I wrote PM Desktop in my spare late-night hours and weekends and it is not a
Microsoft sponsored or supported program. I hope this help file answers all
your questions about PM Desktop since I don't have much spare time to
support it myself.

The three Desktop files (DESKTOP.DLL, DESKTOP.EXE, DESKTOP.DOC) should all
be distributed together since only two of them, without the other, could be
worse than useless.

Using PM Desktop is easy- just click somewhere on the desktop surface, some-
where where the screen background isn't covered by a window, and up pops the
Desktop Menu. You'll notice many disabled menu items; PM Desktop doesn't
get as much development attention as it deserves and many features are
currently disabled because they're either buggy or just unimplemented.
These features and more will be enabled in future versions of PM Desktop.

These are the currently implemented features as shown on the Desktop Menu.
'+' denotes a submenu title and '-' an individual submenu item.

Selecting 'Background...' allows you to select a new background picture for
your desktop. Use the file dialog to find the background picture you want
and double-click on it, or press the 'Open' button to load and display the
new picture. If the file you select is not a valid PM bitmap, then the
current picture will be thrown away and no new picture will be displayed.

The 'Settings' submenu allows you to control various Desktop parameters via
several configuration dialogs. Most settings are written out to OS2.INI and
become permanent -- even across machine reboots -- until you next change
them.

The 'PM Desktop...' settings dialog can be used to configure the general
behavior of PM Desktop. It provides control over how the Desktop Menu is
invoked, how the background picture should be displayed, and whether or not
PM Desktop adds the Desktop Menu to all windows that have a System Menu on
them.

If 'Enable '/' Menu' is not selected (default), PM Desktop leaves your
window's System Menus alone. If the '/' menu enabled, PM Desktop adds the
Desktop Menu into the System Menu of all windows created from then on. This
allows you to get to PM Desktop's functions even when the desktop is
completely obscured, say by a maximized application.

'Enable VIO Pasting' enables a new command on the system menu of VIO
applications running in a window, like CMD.EXE. The new command 'Paste'
allows the contents of the clipboard to be pasted into the window. When
combined with the VIO 'Mark' and 'Copy' commands, this very handy feature
provides complete cut/paste ability to people who use VIO editors and other
OS/2 character mode applications. Thanks to Mark Taylor for this feature.

The 'Debug' checkbox is for people who are running 'debug' versions of OS/2.
It changes the way PM Desktop repaints the background such that the debug
version string appears at the bottom of the screen. This has the nasty side
effect of causing the background to be repainted incorrectly under certain
rare timing situations. If you use a retail version of PMWIN or you aren't
interested in seeing the version string, leave this option in its default
state (disabled).

The group of 'Desktop Menu Activation' radio buttons specifies how you
invoke the Desktop Menu. You can choose double-clicking, single-clicking
(default), or disable the Desktop Menu altogether. Be careful when
disabling the Desktop Menu. If you don't have the '/' menu enabled, you
won't be able to get at PM Desktop's functions any more. If this happens by
accident, you can recover by deinstalling PM Desktop and reinstalling it
again. To do this, simply type "desktop -d" (to deinstall) and then
"desktop -i" (to reinstall). You must reboot for reinstallation to take
effect.

This is the default and causes the specified picture to be centered on
the screen. If the image is too big to fit, it is clipped to the size
of the screen.

Smaller pictures can be 'wallpapered' across the desktop with this
option. The picture is replicated horizontally and vertically to
completely cover the background. Note: for performance reasons, this
takes as much memory as non-tiled full-screen picture. Very small
pictures should be tiled using the memory saving 'Pattern' option.

When displaying a picture that was created for another display device,
use this option to scale (stretch/shrink) the picture to cover the
background. Note: there is a known OS/2 bug that will cause an error to
occur when scaling very small bitmaps into large bitmaps. If you select
'Scaled Image' and the resultant background looks like garbage, try
another display option or a new larger picture.

If you like a simple repetative background images, 'Pattern' is the
display option for you. 'Pattern' takes the first 8x8 area of the
background picture and tiles it over the whole screen. 'Pattern' has an
advantage over 'Tiled Image' because it uses far less memory. A typical
8x8 pattern only requires 128 bytes of memory, compared with the
153,000+ bytes required by a tiled or full-screen picture.

+ Switch - Switch directly to any other application, without going through
the Task Manager.

+ Toys
Stupid - This dances a few lines around the screen. Mildly entertaining
but it has a few painting problems and can leave harmless trash
on the screen.
Lively
Puzzle
Doodle
Stars

The two different 'Snapshot' menuitems allow you to take a 'snapshot' of a
window or the screen and place it on the clipboard as a bitmap image. Once
a snapshot is taken it can be pasted into any application that can paste
images from the clipboard. This can be used to include window and screen
shots in mock-ups, demonstrations, and documentation.

This snapshots the currently active frame window's image to the clipboard.
The keyboard equivelent to this menu item is 'Shift+PrintScreen', but will
not work if the active window is a 'VIO' window.

This snapshots the entire screen image to the clipboard. The keyboard
equivelent to this menu item is 'Ctrl+PrintScreen', but will not work if the
active window is a 'VIO' window.

'About...' tells you a bit about the great guys behind PM Desktop as well as
the current version number. This document was written for version '1.2' of
PM Desktop.

This program is provided to support changing the desktop background from
the CMD.EXE command line or from batch files. Now, all you people without
mice can still have beautiful desktop backgrounds. A typical example of
using DESKTOP.EXE would be to load a picture from a network server at boot
time. Adding something like this to your STARTUP.CMD would do the trick:

Other possibilities include launching a command file a periodic intervals
to change your background picture. Even simple slide shows are possible.
DESKTOP.EXE supports almost all the options that are accessible from the
Desktop Menu. Here's the syntax for the DESKTOP.EXE's parameters.

Some options (-dir) have no effect until the system is rebooted.

* WHERE TO FIND SOME PICTURES

On \\hagar\scratch \c-stankr\pics there is a text file called 'registry'.
This file contains a listing of servers that have PM .BMP format pictures
which can be used as PM Desktop backgrounds. If you have pictures of your
own that you'd like to share just add your server\share to the registry
document.

The PM Desktop DLL provides application interfaces for querying the PM
Desktop state, setting the desktop background, and loading PM .BMP format
bitmap files. Documentation on these Desktop APIs is in the DESKTOP.H
file. DESKTOP.H and DESKTOP.LIB along with the source for DESKTOP.EXE can
be found on \\toys\desktop.

If, by chance, you find any bugs in PM Desktop, send mail to me (darrinm)
describing how to reproduce the problem and I'll fix it. If you have any
ideas for neat new features that would be appropriate for PM Desktop, send
'em to me and I'll see what I can fit in.

Added support for BITMAPARRAYs. Now you can create desktop background
images and patterns with the Icon Editor.
Now automatically switches to 'Image' display mode if you load a desktop
background while none is currently being displayed.
Added a work-around for the initial desktop painting bug in PMWIN.