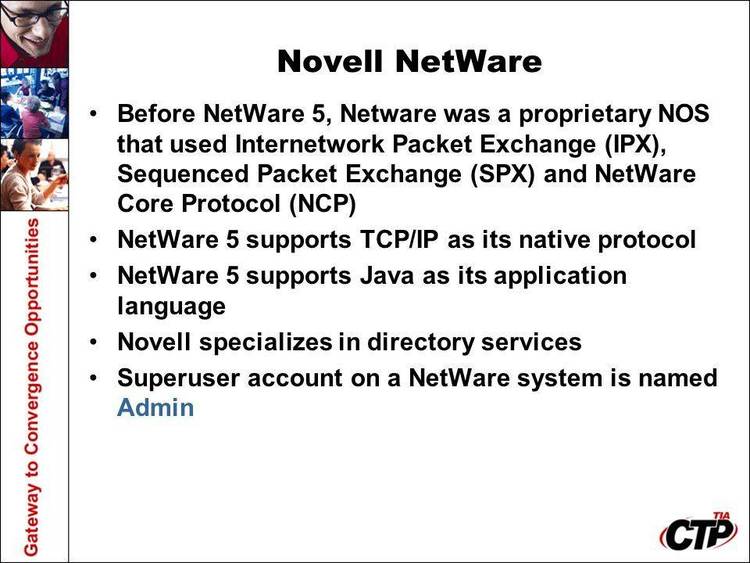 INSTALLING NETWARE WITH A PACKET DRIVER


Brigham Young University (BYU) has developed a system that
allows Novell's Netware to share the network adapter card in a PC
workstation with other networking systems. This is accomplished
by using software that supports the PC/TCP Packet Driver
Specification. This interface specification, proposed by FTP
Software, Inc. allows various products to concurrently utilize the
network adapter card installed in the PC.

What You Will Need

To successfully allow Netware to share the network adapter with
other software, you will need the following:

1. The shell drivers written by BYU that will allow you to
generate a Netware shell for the PC workstation. If you are
interested in using the Novell Bridge Program with other
networking software, then you must also use the LAN drivers
that are distributed with the shell drivers. These drivers
are written to meet Novell's specifications and operate
according to the Novell documentation found in the System
Installation manual. These drivers can be obtained by
anonymous FTP (password guest) from dcsprod.byu.edu
(128.187.7.3). The drivers are found in a \novell sub-
directory in a self extracting archive file called:
"novell.exe". Currently, these drivers support Netware
versions 2.1 and higher.

2. A packet driver that supports the type of network adapter that
you are interested in using. This software, similar to a DOS
device driver, controls the adapter card and interfaces to
the various systems that want to use it. These are available
for a number of popular network cards including: 3COM, Western
Digital, Micom Interlan, and others. There is an Internet site
that acts as a repository for packet drivers. They can be
obtained from sun.soe.clarkson.edu (128.153.12.3) via
anonymous FTP in a directory called: pub/ka9q. The file is
a self extracting archive file called drivers.exe. Some
adapter card manufacturers are also beginning to supply packet
drivers with their hardware. Ask your vendor if they support
a packet driver for their card.

3. Configuration support for the Netware file server that you
wish to communicate with. There is a minor configuration
change necessary to the file server that you wish to
communicate with. The file necessary to accomplish this
configuration change is found in the novell.exe file that you
retrieved for item 1.
4. Other networking software products to operate concurrently
with packet driver Netware. The whole reason for doing this
in the first place is to allow concurrent operation of Netware
with other software products. It is beyond the scope of this
document to describe how you acquire them. Several that have
been tested and are compatable with Netware are: 1) PC/TCP
from FTP Software Inc. 2) KA9Q Internet Program from Phil
Karn, and 3) NCSA Telnet from National Center For
SuperComputing Applications. Since this Netware system
follows the PC/TCP Packet Driver Specification, it should be
compatable with any other networking products that adhere to
the same specification.

1. Generate a new IPX.COM file for your Novell Workstation. To
prepare for this, copy the files from the directory in which
you have extracted them from the archive file, to the Netware
directories as specified in Appendix A. Follow the
instructions for generating a Netware shell and select the
"Packet Driver" driver from the Network Driver Menu during the
SHELLGEN process. The shell drivers have no configuration
options and will scan the interrupt vectors Ox60-Ox80 for a
loaded Packet Driver. It will use the first one found.

2. Install the appropriate packet driver on your PC workstation
for the adapter card that you have. The packet driver is a
DOS "terminate stay resident" type of program that attaches
itself to DOS when it is executed. Therefore, it should
probably be placed in the autoexec.bat file so that it is
installed when the machine starts up. Specific instructions
for installation on the particular card you are using is
included in the drivers.exe archive file that you retreived
earlier, or by entering the driver name without any options
at the DOS prompt.

3. To configure the file server for proper operation, you must
utilize a Novell utility called "econfig" to change the
network operating parameters on your existing file server.
Detailed description on the use of econfig is found in
Appendix B of this document. A copy of econfig.exe has been
included in the novell.exe file that you retrieved.

4. Install other software products for the packet driver as
specified in their respective installation manuals.


APPENDIX A
CONTENTS OF THE NOVELL.EXE ARCHIVE FILE

These drivers conform to the specifications in FTP software's
PC/TCP Packet Driver Specification, Revision 1.05. When a shell or
bridge is generated using these drivers, it is possible to share
a NIC with other software such as FTP's TCP/IP software.

These drivers are expecting a Packet Driver Interface to already
be loaded somewhere between INT 60h and 80h.

The shell drivers have no configuration options and will scan the
interrupt vectors for the Packet Driver. This means that if several
Packet Driver interfaces are loaded at one time, the first found
(lowest) will be used to access Novell Ethernet packets.

The LAN drivers have 5 options. Options 1-4 allow for multiple LAN
Packet Drivers by specifying INT 60h,61h,62h,or 63h. The fifth
option is for a Bridge that has only one PD and the driver will
simply find which INT to use as in the shell driver.

These drivers only operate on the Novell Ethernet type 8137 and not
the 802.3 protocol most often used by Novell. To allow for the
correct packets it is necessary to run Novell's ECONFIG utility on
any bridge or server which needs to be visible by the packet
driver.
APPENDIX B
ECONFIG INSTRUCTIONS

The system manager should follow the ECONFIG command with the
server volume, the file name, and a parameter as follows:

The volume refers to the volume on which the file resides, the file
refers to either the OS or bridge file. The parameter refers to
the LAN card in the device the system manager is configuring. Each
NetWare file server can support up to four LAN cards, therefore
Novell assigns letters (A-D) to correspond with each card. The
constant is Novell's hexadecimal protocal number, 8137. After
ECONFIG runs, the driver will be properly configured for the
Ethernet specification.

The system manager can enter ECONFIG from the command line,
following with the file's name and the Enter key(