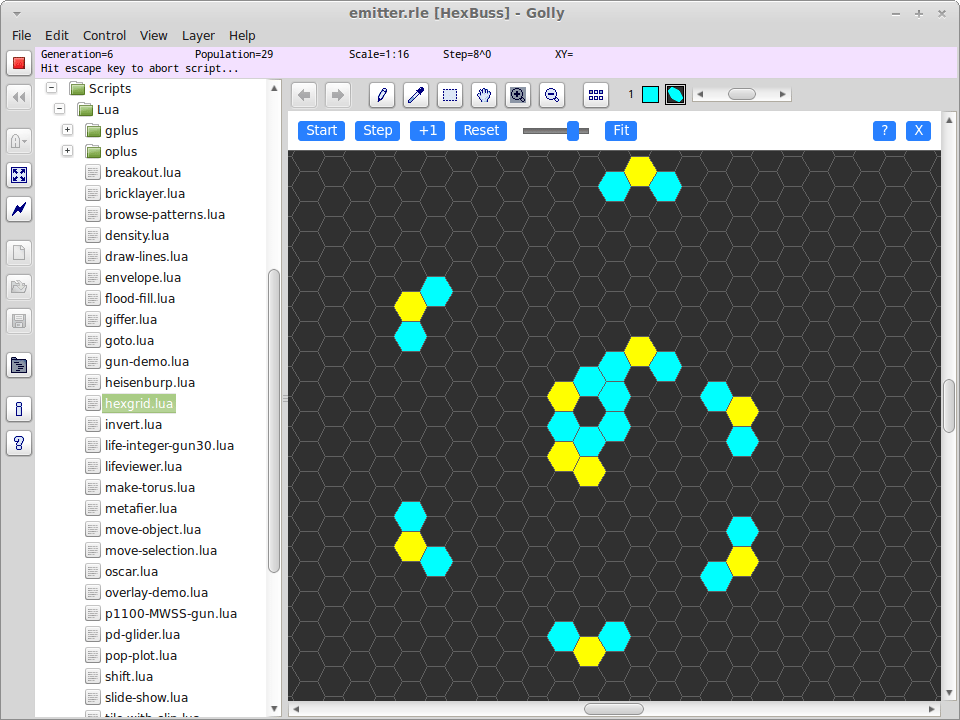 Contents of the LIFE.DOC file

Contained in MLIFE.ARC you should find the following files:

This program is an implementation of the game of LIFE as developed by
John Horton Conway. For a complete description of the game, see "Wheels,
Life and Other Mathematical Amusements" by Martin Gardner, copyright
1983 by W.H. Freeman and Company.

This particular program was written originally in TURBO-PASCAL on a 64K,
CP/M, BMC if 800 computer by Randall A. Maddox [(301) 428-9581]. It
has since been slightly modified to run on IBM PCs and clones under
PC/MSDOS and has also been translated into Modula-2. The TURBO-PASCAL
version is found in PLIFE.ARC, while the LogiTech Modula-2 version is
found in MLIFE.ARC.

The game is played on a 24 by 80 grid, giving a total of 1920 cells to
be displayed on the screen. The basic idea is to start with a simple
configuration of cells occupied by organisms, then to observe how this
configuration changes as Conway's genetic laws are applied. The genetic
laws are simple:

SURVIVALS: Every organism with either two or three neighbors survives
to become a mature organism in the succeeding generation.

DEATHS: Every organism with less than two or more than three neighbors
dies.

BIRTHS: Each empty cell with exactly three neighbors becomes occupied
by a newborn organism in the succeeding generation.


The first 24 lines of the screen will display the current organism
configuration, while the last line is used for status messages and user
input. The program will ask whether you need instructions upon start
up.

You may start this program in one of three ways:

1) The computer generates a random number of organisms and places
them into the grid at random.

2) You pick a number from 1 to 1920 - current count of organisms,
and the computer randomly places that many organisms into the grid.

3) You place from 1 to 1920 - current count of organisms into the grid
in any configuration you may desire.

You may also modify the current display at any time, adding or removing
organisms at will. Any display may also be written out to your printer.

Some of the common configurations that will occur are identified here:
(See Martin Gardner's book, referenced above, for a much more complete
listing.)

The first 11 figures (Block thru Snake) are all stable configurations
that will persist with no change, if not acted upon by other figures.
The next 7 figures (R-pentomino thru Clock) are all oscillating
configurations that go through varying numbers of phases before
returning to their original shape. The last 2 figures (Glider and
Spaceship) are also oscillating configurations, but as they cycle
through their phases, they also move across the screen. They are
active colony organisms!

There are many other stable, oscillating and moving configurations that
may arise. The individual organisms are born, live and die according
to simple rules, but the collection of organisms display dynamic
interactions of fascinating complexity. Hope you have as much fun
with this game as I have!

The files IBMSCR.DEF and IBMSCR.MOD are the definition and implementation
modules, respectively, of a set of procedures for handling screens on
IBM PC/XT/AT compatible computers. Some of these procedures are used
in the program Life. You may find these procedures useful, and you are
welcome to use, modify and distribute them as you will. I ask only that
you do not remove my name from the source so that I may be kept posted
of any problems or suggested updates, and that, if you do modify the
code, please keep the Update History current.

The files UTILITY.DEF and UTILITY.MOD are the definition and implemen-
tation modules, respectively, of some other possibly useful procedures
for IBM PC/XT/AT compatible computers. As above, you are welcome to
use, modify and distribute this code as you will, subject to the same
requests.

A brief listing of the procedures found in each module is included here.
For a more complete description, see the .DEF files.

{end of this file}