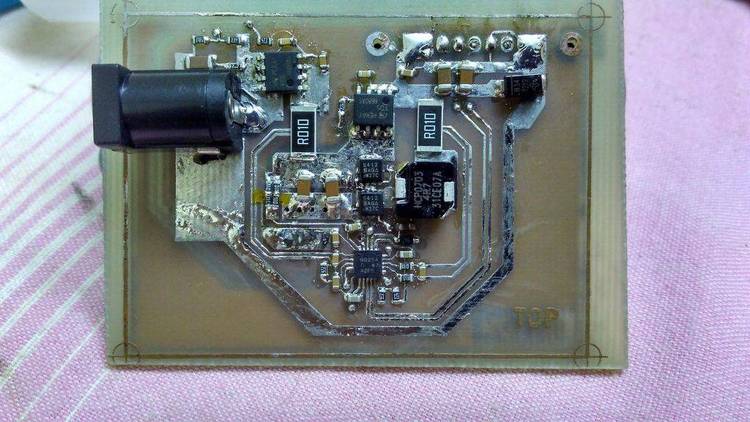 Contents of the XEROXPCB.TXT file

DISCLAIMER:
ANYONE ATTEMPTING TO USE THE PROCESS DESCRIBED IN THIS FILE AGREES TO HOLD
THE AUTHOR HARMLESS FOR ANY LOSS, DAMAGE OR INJURY, EITHER DIRECT OR
SUBSEQUENT RESULTING FROM ITS USE OR MISUSE.


This file describes a simple process for making printed circuit boards
(PCB's) using an ordinary plain paper copier to generate the etch resist.
Although the technique is imperfect, it can produce reasonable quality
boards for the serious electronic hobbyist. By putting this file on EXEC-PC
BBS for comment, I hope to generate enough interest from other electronic
enthusiasts for them to experiment furthur and help perfect the technique.

Conceptually, making a PCB is simple. The basic steps are:

1) Generate an artwork describing the pads and interconnecting foil
traces of a circuit.

2) Form an "etch resist" on a blank, copper covered board which
duplicates the artwork.

3) Immerse the board in an "etchant" solution which chemically removes
all copper except that covered by the resist.

4) Remove the resist to expose the copper which now duplicates the
original artwork.

5) Drill holes in the pads for component mounting.

6) Mount and solder components in place.

All the above basic steps are commonly done using techniques ranging from
downright crude to very sophisticated - hobbyists tending towards the
crude. This scheme addresses 2) above, which is probably the most difficult
step from a process/flaw standpoint.

Most hobbyists form the etch resist on the board in one of three ways:

1) Draw the pattern by hand directly on the board using an "etch resist
pen" (actually a fine point, waterproof, permanent marker). This works,
but results are very inferior and pretty much limited to only the
simplest of layouts.

2) Form the etch resist using pre-cut "dry transfer" patterns and thin
tape, again directly on the blank board. This works pretty well, but
suffers from some inaccuracy of placement and is plagued by the
patterns comming loose during etching. Making multiple copies of the
same board is also a problem.

3) Photographically reproduce the pattern on specially prepared blank
boards covered with UV light sensitive material. Depending on the type
of coating, this involves contact printing the board with a positive or
negative "photomask" over the board, much like an ordinary photograph
is made. The board is then exposed to high intensity UV light and then
"developed" using a prescribed chemical to wash away unwanted areas.
This technique is potentially excellent, being essentially the same as
the process used commercially. The hobbyist is faced with several
problems implementing this technique. Preparing a good photomask is
difficult - particularly if the original artwork is twice actual size -
the industry norm. The photosensitive material can have flaws,
particularly if applied manually, which is normally the case. Usually
the patterns on the developed board are transparent, which makes
finding and correcting flaws difficult. The flaws can arise from many
sources - poor photomask density, improper exposure/developing, dust,
etc.

The technique I will present here uses a plain paper copier to generate the
etch resist. It is NOT a new idea - I first heard of it several years ago,
but didn't pursue it very far because the copiers of the day were
inadequate for the task. I have added some improvements on the scheme from
the original idea.

The concept is again simple - copy an artwork onto a carrier sheet, using
heat and pressure transfer the pattern to a blank board and remove the
carrier leaving the toner as an etch resist on the board. Properly done,
this does work - I've made several fairly good circuit boards using it. It
does still have problems, but maybe you, the reader, can help improve the
process.

I won't go into the theory of copier operation, but basically it involves
forming an image on paper sheet (or other thin, flexible non-conductive
material) using a powder called toner. The sheet is then fed between heated
rollers, causing the toner to "fuse" into a solid and seep into the surface
irregularities of the paper, effectively bonding it to the paper.

The idea here is to use a sheet of some material to which the toner bonds
only lightly, in place of the paper. Then, using heat and pressure,
transfer the toner to a prepared blank board, which hopefully will bond
more fully to the toner, allowing the original sheet to be peeled off.

I have tried a few different things, but for me the following steps work
best:

1) Prepare a blank board by scrubing it with fine steel wool and an
abrasive household cleanser - the cleaner the better. Rinse the board
completely and be careful to hold it by the edges. Finger prints on the
surface will ruin the pattern. Dry the board with a lint-free paper
towel - make sure no residue remains. Then roughen the entire surface
of the board with 220 grit sand paper. Use a circular motion with very
small movements so that there is no decernable direction or grain to
the surface scratches. This should be done with light force - don't
gouge the board. Tap the board on edge to remove all copper dust and
put it out of the way until needed.

2) Generate an actual size, "wrong reading" copy of the artwork. By
this I mean a view of the pattern as if you were looking through the
PCB from the top side - otherwise the final etch pattern will be a
mirror image of what you actually want. If you have a twice size (2X)
artwork, which is the norm, you can reduce it to actual (1X) by doing a
double reduction of 71% on a copier with reducing capability (most
copiers can't do 50%). If the artwork is "right reading", as is common
with artworks published in magazines, copy the artwork to a
transparency sheet and flip it over for the next step.

3) Load the copier with a sheet of mylar drafting film (available at
most drafting supply stores). Get the type that is "frosted" on one
side only. Make sure the smooth, unfrosted side will be the side used
to accept the image. Now make the copy of the wrong reading artwork
onto the mylar. You might have to experiment with the copiers
"darkness" setting, but try to get a dense, but sharp image on the
mylar. Sacrifice density a bit to get a clear copy, but not to the
point where the density is severely flawed. Remove the mylar film from
the copy tray, being careful not to bend it or get finger prints on the
surface. The toner is brittle and can flake off and finger prints spoil
the transfer. You should probably make 2 or 3 copies, since the next
steps are most error prone.

4) Prepare a working area close to an electrical outlet. Get a firm,
heat resistant surface you don't care about, like a scrap piece of
plywood. Use work gloves to protect your hands, since you will be
handling a very hot circuit board. Preheat an ordinary clothes iron set
to permanent press and DRY heat (no steam). Irons are not precision
instruments, so you might have to experiment with the heat setting.
Basically, you want the highest setting that doesn't melt or curl the
mylar.

5) Place the blank board on the heat resistant surface, with the
prepared surface up. Position the mylar TONER SIDE DOWN on the board
where you want the pattern. Place a piece of paper over the mylar
completely covering it to protect the iron. Place the preheated iron on
top of everything and lightly iron over the whole surface of the board
to initially bond the toner, otherwise it might shift later. Now, using
as much downward pressure as you can, iron over the surface several
times, changing direction often. Iron slowly, but don't let the iron
stand in one place. Pay particular attention to corners and edges. Take
your time and do a complete job, allowing the board to become very hot.
Check your work by lifting the paper and examining the mylar. It should
look even, with no "bubbles" - iron again if not.

6) Once you're satisfied, take the still hot board and immediately
place it in the frozen food section of a refrigerator. Let the board
cool there for 30-45 minutes. Take the cold board out and place it on a
flat surface, mylar side up. Starting at a corner, peel the mylar off
the board gently and keep the mylar. Hopefully, the artwork will be on
the board and pretty much intact. Let the board warm to room
temperature and dry off (it will probably sweat when cold).

7) Most likely, the transfer was not complete. Using the mylar as a
guide, look for areas where the toner didn't transfer. Touch up the
flaws with an etch resist pen. Use light pressure to avoid damaging the
brittle toner on the board. Also check for "pin holes" and areas where

the toner is too thin, inking in corrections with the pen. This is an
important step, the better the resist, the better the board. The copier
may have added flecks or smeared together adjacent features, so remove
unwanted toner with an xacto knife or other pointed tool. Take your
time and do a good job.

8) Etch the board using the directions supplied with whatever etchant
you use. After etching, rinse off the board. Remove the toner from the
board with a suitable solvent, like paint thinner. You should now have
a good board to use for furthur processing.

Now for the warts. The process works, but does have its problems. The
initial toner transfer to the mylar tends to be imperfect, probably because
the mylar is not a good medium. The reason for using the mylar is that the
toner doesn't bond well to it - which also means the copier doesn't do a
good job to begin with. The prepared copper blank doesn't bond to the toner
all that well either, so the transfer can flake.

Most copiers don't produce an exact one-to-one copy, but reduce the size
slightly. This dimensional inaccuracy usually isn't too much of a problem,
since most electronic components have flexible leads, but can mess up large
connectors with stiff posts.

Copier optics are usually poor, so there may be non-linear distortions in
the final pattern. For single sided boards, that's not an issue. Double
sided boards though need good registration between sides, but the
distortion is guaranteed to be mirror imaged because of the need for two
wrong reading images. The problem is compounded if the artwork also needs
to be reduced.

Copiers usually don't do large areas well, so the toner may be thin. Also,
the toner is thin at the edges of ALL shapes, which means that thin traces
will wind up being even thinner - maybe to the point of causing a break.

Theorectically, most of the copier problems could be overcome by using a
laser printer to create a 1X artwork directly on the mylar, in wrong
reading form. I have not tried that yet.

I have not tried other materials other than the mylar, acetate film and
paper. The acetate tends to melt during the transfer. I have tried using
ordinary paper in place of the mylar, then soaking it in soapy water to
remove the paper. It almost works, but leaves a paper "scum" on the board
in dense areas.

Areas for people to experiment with are better media than mylar, or coating
the mylar with a "release" agent, or finding a better way to bond the toner
to the board. Another possibility is a media which can be dissolved
(anybody know how to dissolve paper?).

How about some ideas ?

Before you run off and try this out, make sure you have permission to try
it out on the copier you want to use. My copier accepts the mylar with no
problem, but others may be damaged by its use (I'm just not sure).