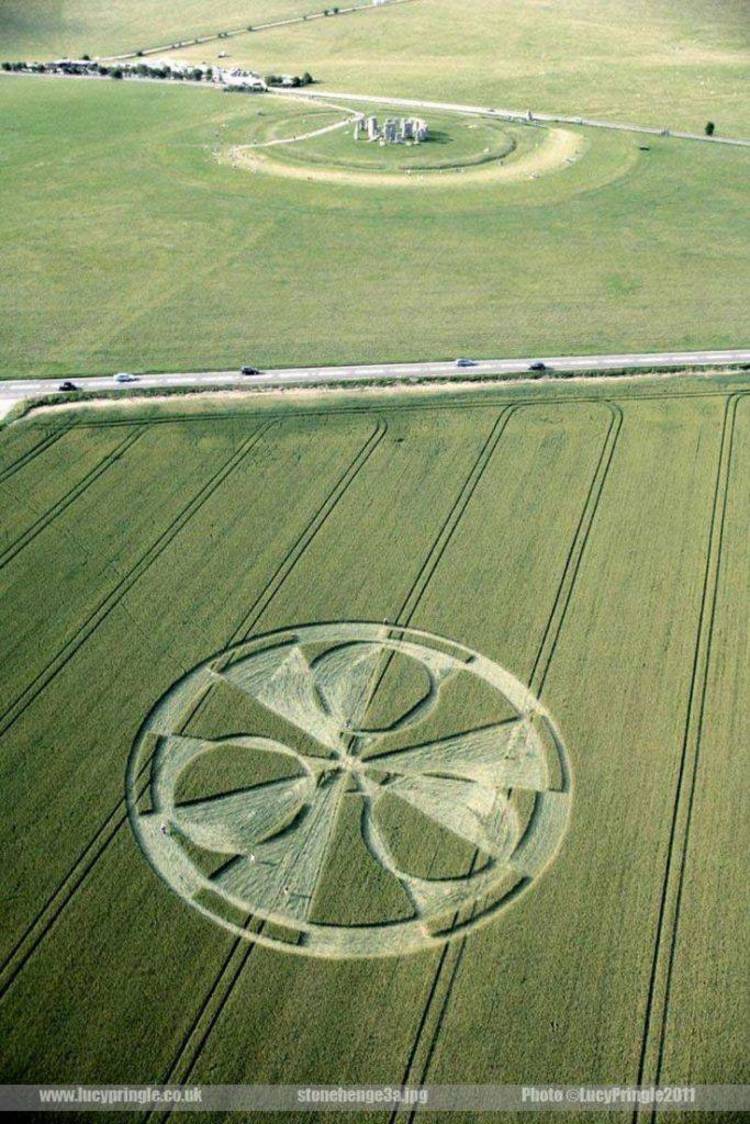 Contents of the CIRCEXPL.TXT file

This article was extracted from ModemNews Magazine

There are ABSOLUTELY NO RESTRICTIONS

on duplicating, publishing or distributing the

The concepts in this document are based on known and current

technologies and capabilities as extrapolated by Jerry Decker,

Cheyenne Turner, Ron Barker, Chuck Henderson, and brought up in

discussions with various other associates of KeelyNet and Vangard

By now, most people are aware of the mysterious crop circles which

States. The patterns began with simple circles that have now become

are pressed down; usually in a swirling pattern having rotations in

either a counter-clockwise or clockwise direction.

Both mystical and pseudo-scientific relationships have been attached

3) lung-mei (earth energies most commonly referred to as dragon

Specific observations regarding the circles

1) There are NO vehicle tracks or footprints leading into or

out of the fields when the circles appear.

2) The circles appear within a very short period of time. The

best estimate I have seen between creation and observation

of a circle is within an hour.

3) The circles ALWAYS APPEAR AT NIGHT.

precede the circle appearance. Other cases cited a

6) The affected crops are bent in a more nearly horizontal

position and continue to grow in that position for a

considerable time after the circle manifestation.

We have a multiplicity of facts to consider which, when taken

together, show a most interesting hypothesis as to a probable cause.

Before going into the hypothesis, let me first state that circular

patterns have been associated with UFO sightings for many years

before Man began launching rockets and satellites into space.

A specific case is that of Billy Meier in Switzerland. Videotapes

of the patterns left at alleged landing sights have three primary

features which correlate exactly with the crop circles. These are :

2) The grass grows in the swirling pattern for several months

AFTER the alleged landing.

3) Many of the sites are in secluded and highly remote areas,

Prior to the last 3 to 5 years, no UFO trace landing site had shown

evidence of any pattern beyond simple circles.

Since the inception of SDI (the Star Wars program), Man has had the

immediately by EXTREMELY high electrical charges aimed at targets on

project these beams of UltraViolet light.

through which the beam passes thus creating a conducting path.

1) to build up a very high electrical charge in the satellite,

2) target a structure from space using a weak UV laser

ionized path is created from the satellite to the target

wire being thrown from the satellite to the target

5) the electrical energy is then transferred to the laser beam

path which passes the artificial "lightning" to the target

6) as the electrical energy passes into the target, the

molecules are electrostatically repelled with explosive

velocities causing the target to explode.

All cells contain DNA and RNA among other things. These two complex

molecules are especially sensitive to UV frequencies in the range of

In addition, cells can be "denatured" or "melted" when exposed to

temperatures in the range of 73 to 77 degrees Celsius. This causes

the ladder-like structure of the DNA/RNA to begin to separate.

living systems. The energy causes micro-heating in the DNA/RNA

which partially "melts" the tissues.

When the heating is removed (and depending on the degree of

melting), the DNA/RNA will revert to the original mirror symmetry

This is not always a perfect reversion to the original pattern

however. Sometimes the patterns are so distorted as to produce

mutations in the form of cancer and other diseases.

Plants also are made up of cells. If these cells are subjected to a

like plastic at their weakest point, i.e. the stalk.

optic modulator. This is simply a front surface mirror (reflecting

computer), the laser beam can be reflected off the mirror to paint a

picture on any surface. The flatter the surface (and the more

perpendicular to the beam), the more perfect the reproduction of the

(intended to be used for SDI purposes), it could quite easily

"paint" a picture on earth or crops.

the bending effect. That is why microscopic examination of the

Now as to the swirling effect of the crop patterns. Anytime a

charged air mass is moved, it must necessarily move air with it.

This effect is used commercially for the production of sound from

When the UV laser is being rapidly directed from the satellite, the

desired direction while they are under the "melting/denaturation"

This sudden moving of air from a moving electrostatic column would

cause a whooshing sound.

Also, the moving orange light could quite well be an electrical

effect in the form of a plasma.

The intriguing thing about the crop circles is that to date, ALL

sightings PRIOR to the SDI project; NEVER involved complex

geometries or patterns beyond a circle shape.

This would follow the UFO landing site theory, that is any pattern

found within the circle could be landing gear or some other

attachment of which we currently know nothing. Note that no lines

or other complex patterns were EVER found before SDI.

circles are the work of an intelligent force, then the pattern would

Another comment was to the effect that "lines or geometric patterns

would be highly indicative of an intelligence at work."

Damned if within the next couple of weeks, lines and more complex

patterns began showing up. Just as if some SDI (or hacker) had read

or heard the media report of such a comment and courteously

MAJORITY of UFO cases over the past few years. Between the

outrageous abductions and the claims of greys eating humans, it is

getting out of hand, even exceeding my credulity (which has been

said to be pretty outrageous).

thought perfectly depicted the majority of UFO "believers" of today.

of penguins standing in front of a dimly lit wall. He then played a

very tight flashlight beam on the wall and moved it back and forth.

Each time, the penguins would follow as if it were food or something

A most hilarious effect, much like my cat following a laser beam.

At any rate, now that there is a somewhat logical hypothesis which

matches and explains a good deal of the phenomena, we can figure out

a means of proving it.

How to Prove the SDI Circle Hypothesis

Technique 1 - use of a camera to automatically record the phenomena

wavelengths would record the "spotlight" of the beam as it

2) multiple consecutive and rapid exposures of the UV sensitive

1) pressurized containers containing a powder or gas which

emitted visible light in the presence of UV wavelengths

2) these containers would be triggered to emit large clouds of

powder and show the presence of the beam

3) once the beams were detected, video cameras could tape the

clouds and show the moving beam presence and pattern

(depending on the speed)

Detection of the presence of the UV laser beam

of the "scanned" beam could be used as a trigger

2) the abrupt change in the electrostatic potential due to the

establishment of the conducting path in the immediate area

could be used as a trigger

One of the reasons I dissociated with ACTIVE participation with the

well as the ridiculousness of many of the stories.

studying this phenomenon without ONE SHRED OF PHYSICAL PROOF.

After this happens to you several times, you look at the person and

think, "How could you throw away your life on such Bullshit!"

Not for ME, I want to make VALID, REPRODUCIBLE contributions in the

form of increased understanding for myself and others, preferably

taking the form of machines or infallible techniques.

Let's face it, much of the WOOFY (airy-fairy) science and much of

the New Age stuff is pure BS. If we can't build a machine to prove

it, or have others duplicate the effect, then IT AIN'T WORTH

Don't blow your life down the tube, be CRITICAL, be ANALYTICAL and

read WIDELY so you can see overlapping patterns. ASK for proof,

don't take someone's word that they can levitate or communicate

telepathically, or astrally project, or whatever.

phenomena or shown a working device to produce an unusual effect,

tell them to piss off and get a job.

Forgive my somewhat negative comments, but on reading this paper, I

can't help but to stress the value of HEALTHY SKEPTICISM.

offering a 5,000 pound reward and the Sunday Mirror who is offering

a 10,000 pound reward to anyone who can fully explain the enigma.

You never know, it might win and COULD WE EVER DO SOMETHING WITH

in the interest of outrageousness,

please make out any reward or donations to

If you have comments or other information relating to such topics

as this paper covers, please upload to KeelyNet or send to the

Vangard Sciences address as listed on the first page.

Thank you for your consideration, interest and support.

If we can be of service, you may contact