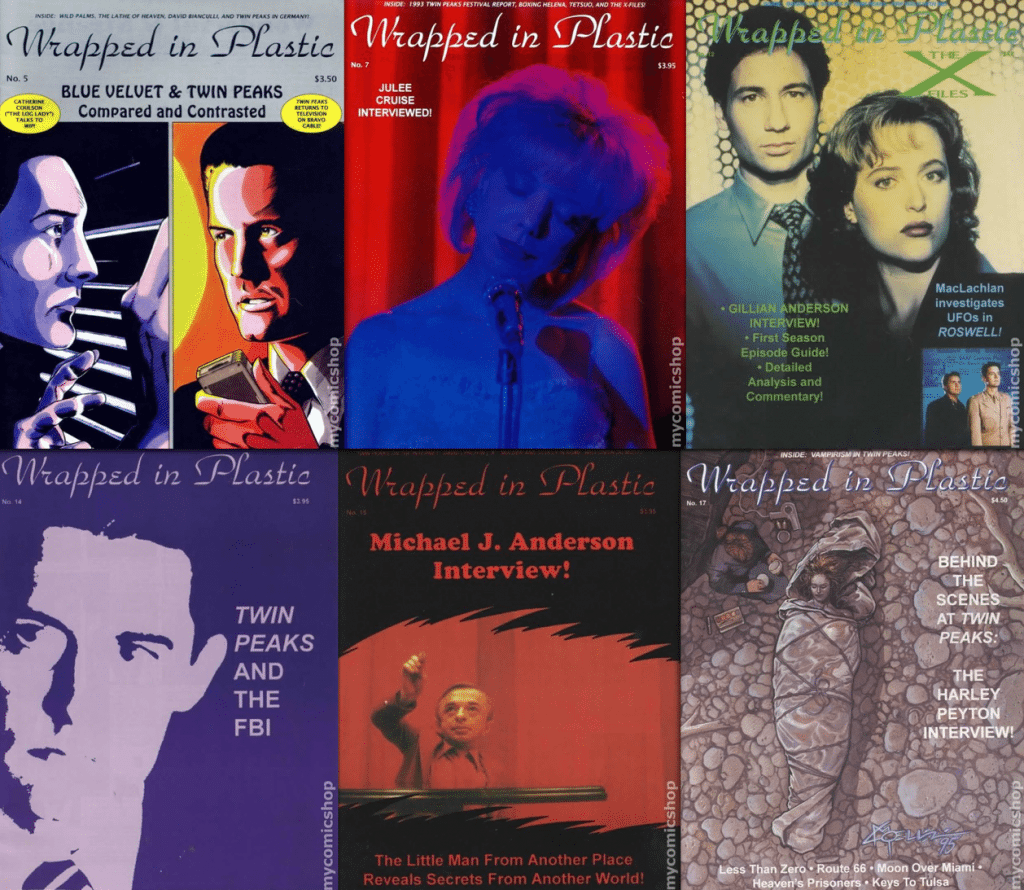 Contents of the TWINPEAK.DOC file

Here is the timeline. Someone a while back started this
(I don't know who) and posted it, and I took it and added a few details
and transcribed scenes I've seen in articles here.
If you have corrections or have transcribed scenes (*please* make sure they
are correct - not just from memory as I don't have time to go check) then
send them to me at [email protected]
Thanks to the person who started this and to all those who transcribed
scenes.

August 1987 (approx)
-- Andrew Packard dies, supposedly in a boating accident. Truman first tells
Cooper Packard died "last year" which would've been 1988 but later tells
him it happened "a year and a half ago."
-- Hank Jennings "accidently" kills an unnamed vagrant, is convicted of
vehicular manslaughter and sent to jail. (He's said to've spent 18
months in jail.)

06 Feb (Monday) (date at top of page in diary)
-- "Day One" (entry in Laura's diary). During Cooper's questioning of James,
he asked what happened on 2/5 and James flashed back on the time when
Laura gave him the locket. Cooper said to Diane he had flipped back 18
days to "Day One." That could be 18 days from 2/23 (last entry in the
diary), yielding the 5th, or from 2/24 (the day he was looking at it),
yielding the 6th.

Sometime after dinner
-- Last entry in Laura's diary: "Nervous about meeting J. tonight."
(After dinner since she remarks about having asparagus for dinner again)

"Just after dawn" (Harry to Bobby)
-- Pete Martell finds Laura's body: "She's dead...wrapped in pastic"
-- Ben and Leland have meeting with Norwegians. Ben mentions he has
information that the sawmill will go belly up within a year.
Leland receives news about Laura.
-- Bobby takes Shelley home, then goes to school and is arrested.

Mid-morning(?)
-- Ronnette announced as missing then is found wandering along the tracks.
-- Nadine sends Big Ed off to get the drapes ("They said those drapes would
be ready by 10.")

11:30 (Cooper to Diane)
-- Cooper enters Twin Peaks. (He had lunch at the Lamplighter Inn)

Late afternoon
-- Cooper and Truman at the bank. Clerk says Laura had safety deposit box
for about 6 months. Inside are over $10,000 and a copy of Fleshworld.
-- Leo finds two kinds of cigarette butts in the ashtray and threatens
Shelley.

Early evening
-- Town meeting where Cooper addresses the community leaders. He says that
one year ago, almost to the day, in the southwest corner of the state,
a girl by the name of Theresa Banks was found dead and because of
"irrefutable similarities," he believes that same perpetrator killed
Laura and almost killed Ronnette.

09:30 (approx)
-- Donna sneaks out to meet James at the Roadhouse. Big Ed meets Norma there
as well. Fight breaks out, Joey Paulson takes Donna to meet James. James
and Donna bury the locket, on a thong. James is arrested.

Late evening
-- Truman meets Josie, has been seeing her for about 6 weeks (Truman to
Cooper)
-- Catherine meets Ben, tells him they agree "to meet to talk about it"

12:28 am (Cooper to Diane)
-- Cooper knocks off for the night at the Great Northern. Locket, on a
thong, is dug up by person unknown (Jacoby).

06:18 (Cooper to Diane)
-- Cooper is up and goes to breakfast, where he meets Audrey

Early to mid-morning
-- Cooper rattles off the day's schedule to Truman, who's stuffin' his face
with a donut. C: "Harry, I really have to urinate!"
-- Cooper and Truman get autopsy results from Dr. Hayward
-- Shelley discovers Leo's shirt soaked with blood and hides it
-- Cooper and Truman question James
-- Mike and Bobby talk in jail cell (Leo called Mike "yesterday" and Bobby
met with Leo "the night Laura died")
-- The Donna and Laura picnic video
-- Donna to mom: Laura's been seeing James for 2 months. Donna is sad but
happy.
-- Cooper gets call from Albert. Harry and Ed discuss the stakeout. Ed
thinks his drink was drugged at the Roadhouse. The bartender was Jacques.
-- James released into Ed's custody, Mike and Bobby released.

"Just barely morning" (Pete to Josie)
-- Cooper and Truman talk to Josie. Pete: There was a fish... *in* the
percolator.
-- Catherine meets Ben. They plan to torch the sawmill.

Afternoon
-- Donna visits the Palmers. Sarah has a vision of Laura and killer Bob

Later in evening
-- Shelley gets home and is beaten by Leo
-- James has dinner at Haywards'
-- Jacoby listens to tape from Laura, takes out the locket, on a thong
-- Bob Lydecker assaulted outside a bar in Lowtown, a section of Twin Peaks
(not shown)

-- Jerry Horne gets back from Paris. He and Ben go to OEJ.

Midnight (clock at Haywards')
-- James and Donna have their heart-to-heart
-- Hawk calls Cooper, tells him that Ronnette recently quit at the perfume
counter
-- Audrey slips note under Cooper's door (Jack with one eye)
-- Bobby and Mike meet with Leo in the woods. Bobby sees someone with Leo.
Leo: Leo needs a new pair of shoes!

Late morning (after church)
-- Haywards meet Audrey in the RR who puts on music on the juke. "God,
I love this music. Isn't it too dreamy?"

Afternoon ("are we going to have to stand here all afternoon?" Albert to
Lucy)
-- Albert and team arrive

Night
-- Nadine ecstatic about her now-silent runners
-- Pete and Catherine talk. Pete sneaks safe key to Josie and she finds two
ledgers in the safe.
-- Leland has a breakdown to the strains of Glen Miller
-- Cooper dreams:
A series of sudden images, as if illuminated by a strobe light with
darkness in between:
Cooper in a chair, the dwarf
Laura's mother running downstairs [from episode 1000]
Bob at foot of Laura's bed
A bloody cloth [in the railroad car?]
Laura dead
Bob crouched at Laura's bed [Sarah's vision]
The One-Armed Man:
Through the darkness of future past,
The magician longs to see
One..chants...out..between two worlds...
Fire...walk with me.
We lived among the people -- I think you say convenience store?
We lived above it. I mean it like it is, as it sounds. I too
have been touched by the devilish one; tattoo on the left shoulder.
Ah, but when I saw the face of God, I was changed. I took the
entire arm off. My name is Mike. His name is Bob.
Bob, crouched in some room full of clutter (tantalizingly
unrecognizable metal objects) like an attic or basement. He looks
around and says:
Mike? Mike? Can you hear me? [he turns to look at the camera]
Catch you with my death bag!
You may think I've gone insane, but I promise I *will* kill again!
A small mound of dirt with a gold necklace on it, surrounded by a
ring of candles. A puff of wind; the candles blow out.
An older Agent Cooper (in his 50s or so) is sitting in a red-carpeted,
red-curtained lounge. Laura Palmer is sitting a few chairs away from
him, dressed in a slinky black dress and looking very elegant. There
is a strange scraping noise - a distorted silhouette of a person,
backlit against a doorway -- it seems to be shuddering somehow -- the
scraping noise gets faster. Suddenly the distorted silhouette turns
around. It's The Little Man From Another Place. The scraping sound
was him rubbing his palms together. He's got a cheerful, wide smile,
and he says (in twisted, reversed backwards English)
Let's rock!
He sits in one of the chairs. There is a pause. A black shadow drifts
slowly over the red curtains, over their heads. Laura puts one finger
next to her nose, looking significantly at Cooper. Then:

LMFAP: [to Cooper] I've got good news. That gum you like is going to
come back in style. [noticing Cooper staring at Laura] She's my
cousin. But, doesn't she look almost exactly like Laura Palmer?
Cooper: [to LMFAP] But she is Laura Palmer.
[to Laura] Are you Laura Palmer?
Laura: [arching her back weirdly] I feel like I know her,
but sometimes my arms bend back.
LMFAP: She's filled with secrets. Where we're from, the birds sing a
pretty song, and there's always music in the air.
Slow jazz music begins to play. The Little Man From Another Place
stands and starts a jerky dance. Laura stands, crosses to Cooper,
kisses him, and whispers something in his ear.
-- Cooper jerks awake, with his special Cooper Cowlick pointing straight
up. He calls Harry and says he knows who killed Laura Palmer --
but it can wait till morning.

07:15 (Cooper to Diane)
-- Cooper meets with Audrey over breakfast then tells Harry and Lucy about
his dream. In actuality, he describes the ending to the European
version. He can't remember the killer's name.
-- Fight at the morgue: Ben and Doc Hayward won't let Albert continue with
his autopsy.
Albert: Mr. Horne, I recognize that your position in this fair
community necessitates venality, insincerity, and a certain irritating
manner of expressing yourself. Stupidity, however, is not a necessarily
inherent trait. Therefore, please listen closely--You can have a
funeral any old time. You dig a hole, you plant a coffin. I, however,
cannot perform these tests next year, next month, next week or even
tomorrow--I must perform them now.