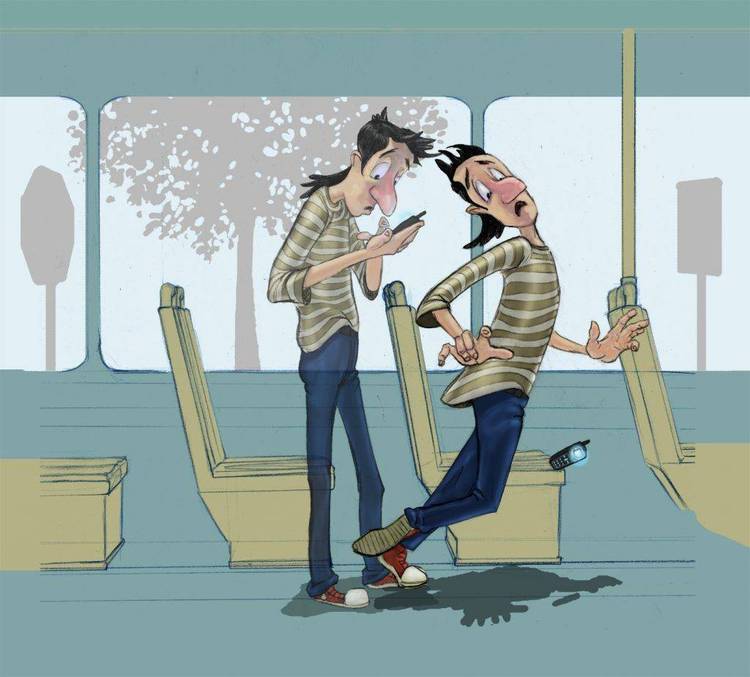 Contents of the CARTOON.TXT file

Daffy Duck steps off a cliff, expecting further pastureland. He loiters
in midair, soliloquizing flippantly, until he chances to look down. At
this point, the familiar principle of 32 feet per second per second
takes over.

Cartoon Law II
==============
Any body in motion will tend to remain in motion until solid matter
intervenes suddenly. Whether shot from a cannon or in hot pursuit on
foot, cartoon characters are so absolute in their momentum that only a
telephone pole or an outsize boulder retards their forward motion
absolutely. Sir Isaac Newton called this sudden termination of motion
the stooge's surcease.

Cartoon Law III
===============
Any body passing through solid matter will leave a perforation
conforming to its perimeter.

Also called the silhouette of passage, this phenomenon is the speciality
of victims of directed-pressure explosions and of reckless cowards who
are so eager to escape that they exit directly through the wall of a
house, leaving a cookie-cutout-perfect hole. The threat of skunks or
matrimony often catalyzes this reaction.

Cartoon Law IV
==============
The time required for an object to fall twenty stories is greater than
or equal to the time it takes for whoever knocked it off the ledge to
spiral down twenty flights to attempt to capture it unbroken.

Such an object is inevitably priceless, the attempt to capture it
inevitably unsuccessful.

Psychic forces are sufficient in most bodies for a shock to propel them
directly away from the earth's surface. A spooky noise or an
adversary's signature sound will induce motion upward, usually to the
cradle of a chandelier, a treetop, or the crest of a flagpole. The feet
of a character who is running or the wheels of a speeding auto need
never touch the ground, especially when in flight.

This is particularly true of tooth-and-claw fights, in which a
character's head may be glimpsed emerging from the cloud of altercation
at several places simultaneously. This effect is common as well among
bodies that are spinning or being throttled. A `wacky' character has
the option of self-replication only at manic high speeds and may
ricochet off walls to achieve the velocity required.

This trompe l'oeil inconsistency has baffled generations, but at least
it is known that whoever paints an entrance on a wall's surface to trick
an opponent will be unable to pursue him into this theoretical space.
The painter is flattened against the wall when he attempts to follow
into the painting. This is ultimately a problem of art, not of science.

Cartoon cats possess even more deaths than the traditional nine lives
might comfortably afford. They can be decimated, spliced, splayed,
accordion-pleated, spindled, or disassembled, but they cannot be
destroyed. After a few moments of blinking self pity, they reinflate,
elongate, snap back, or solidify.

Corollary: A cat will assume the shape of its container.

Cartoon Law X
=============
For every vengeance there is an equal and opposite revengeance.

This is the one law of animated cartoon motion that also applies to the
physical world at large. For that reason, we need the relief of
watching it happen to a duck instead.

When poked (usually in the buttocks) with a sharp object (usually a
pin), a character will defy gravity by shooting straight up, with great
velocity.

Characters who are intended to be "cool" can make previously nonexistent
objects appear from behind their backs at will. For instance, the Road
Runner can materialize signs to express himself without speaking.

Their operation can be wittnessed by observing the behavior of a canine
suspended over a large vertical drop. Its feet will begin to fall
first, causing its legs to stretch. As the wave reaches its torso, that
part will begin to fall, causing the neck to strech. As the head begins
to fall, tension is released and the canine will resume its regular
proportions until such time as it strikes the ground.

The process is analogous to steady-state theories of the universe which
postulated that the tensions involved in maintianing a space would cause
the creation of hydrogen from nothing. Dynamite quanta are quite large
(stick sized) and unstable (lit). Such quanta are attracted to psychic
forces generated by feelings of distress in "cool" characters (see
Amendment B, which may be a special case of this law), who are able to
use said quanta to their advantage. One may imagine C-spaces where all
matter and energy result from primal masses of dynamite exploding. A
big bang indeed.