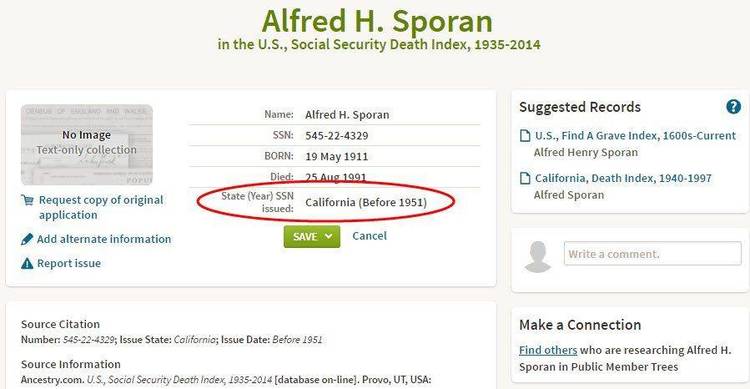 Contents of the SSDEATH.TXT file

A DETAILED STATEMENT ON OUR SERVICE AND FEES

Scope of the Death Master File

Even though the File was released by the Social Security Administration with
the statement that it included deaths dating from the 1930's, we have
discovered in subsequent analyses that it included very few decedents who died
before 1962, probably not many more than one million. This leads us to suspect
that, most likely, records before 1962 have not been converted into machine
readable form. For the period beginning in 1962 to the present, we have
determined by various methods that approximately 85% of the deaths in the
United States are recorded. This percentage correlates well with the portion
of population known to have been excluded from the Social Security System over
the years. The following arithmetic exercise further confirms this. There are
approximately 320 million people who have lived in the United States since the
1930's. Of these, around 240 million are still living and 80 million have died.
If we assume 30 million to have died before 1962 and 50 million afterwards, we
once again arrive at the 85% figure. The comparable percentage prior to 1962
is a minuscule 3%. These percentages should increase in the future as more
people are included in the Social Security System and as the data is updated
with decedent records both before and after 1962.

We have also noticed that the reporting of deaths for the younger ages are not
as immediate as those that are receiving some form of Social Security benefits.
This is probably due to the more circuitous route by which these deaths are
reported.

Details On the Decedent Record

Besides the Social Security number, each decedent record contains the first
twelve characters of the last name and the first ten characters of the first
name. There are no middle names on the data except in those instances when
someone has apparently elected to use first initial and middle name. (A small
number of records seem to have been entered using an attenuated format of only
six characters for the last name and a first initial.)

After 1988, both the dates of birth and death are in the month, day, and year
format. However, before 1988, very few records include the day of death, only
the month and year.

The place of death is normally indicated by only the state of residence for
decedents who died in the early 1960's prior to the general use of Zip Codes.
From the mid-1960's to the beginning of 1988, there is both a state of
residence and a Zip Code. Beginning in February 1988, the state of residence
is usually no longer filled in. A small percentage of the records also contain
a second Zip Code, which indicates that a death benefit was sent to a different
address. For persons who died before becoming eligible for any benefits, there
may be neither a state of residence nor a Zip Code.


Procedures On the Decedent Search

Based on the above analysis, searches will only produce satisfactory results
for persons who were born after 1870, lived long enough to have been included
in the Social Security System, and died after 1962. The search process is
dependent upon what is known about the person and the commonness of the
surname. The amount of information required increases with the commonness of
the surname.

Obviously, if an accurate Social Security number is available, the retrieval
process is greatly simplified. In any event, the better the information we are
provided with, the easier it is for us to make a positive identification.
However, we cannot be responsible for the scope and accuracy of the data and
only guarantee that best efforts are made to present the information as it was
given to us by the Social Security Administration.

Searching for females who have been married and those who may have been married
more than once is understandably more difficult. It is essential that we be
provided with the maiden name as well as all possible married names. Even so,
a positive identification may not be possible unless a precise date of birth is
available. We will search spelling variations in names if they are provided.

Finally, if a person's state or states of origin or residence is known, it is
often useful in making a positive identification.

Surname albums are useful either as a reference for putting together a family
history or for locating groups of decedents with the same surname. Based on
our tabulation, there are currently 1 1/4 million distinct surnames of which
about 1/2 million are unique. They are broken down as follows:

For surnames with variant spellings, we provide a Soundex equivalent table
displaying all surnames with the same Soundex value and their respective
decedent counts. If you are not sure of the possible variants of a particular
surname, please send us a self-addressed stamped envelope, and we will be happy
to provide a Soundex equivalent table free of charge.

If the surname of interest is very common, we are able to limit the number of
decedents by state or states of origin. Our normal practice is to include
decedents who either originated or died in a particular state. You should also
be aware that a no print disk-only version for albums of large decedent counts
is available. The cost of such a version is substantially lower. The pricing
for a surname album is based upon the number of spelling variations requested
for a surname and the total number of decedents. Our price is demonstrated by
the following sample quotation for the surname Simmons/Simmonds:

to include the following variations at
$2 per variation but not more than $10:

Adjustments based on decedent counts: