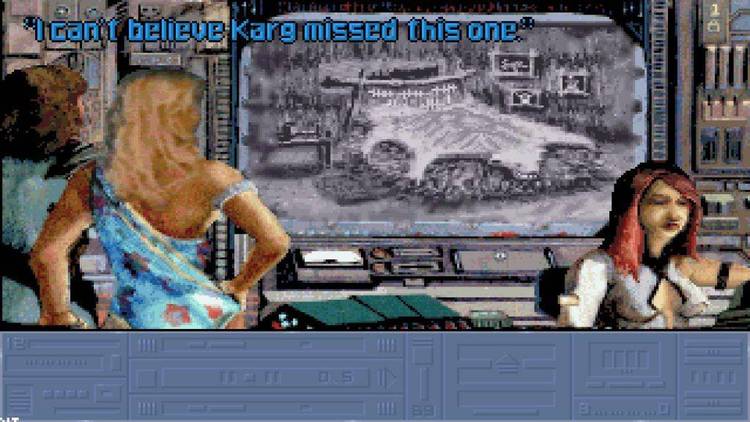 Contents of the REXSOLVE.TXT file

Ok, all you boys and girls. Cool game here. Maybe Sierra will make their
games better now to catch up with this one. This is for the NAUGHTY level,
Expert - Very Difficult level. I can be reached via CelerityNET, or by
calling my board - Dead Man's Hand / 503.288.9264.

Now you're swimming around. RIGHT. You should see a dead fish on the ocean
floor. Pick it up. Put the burger in the fish. DOWN. RIGHT. A purple
tentacle will come out of a small hole and eat a fish. Throw the fish at it.
Wow, you killed it! Now you can go into the cave. RIGHT. UP. You'll climb
out of the water.

Now you're on land. RIGHT. UP. On the lower left corner you should see
some leaves sitting in a pile on the ground close to the pit. Pick them up
and put them on the pit. A trap! How ingenius! LEFT. Go into the voodoo
hut. Pick up the poison darts off of the table. DOWN. LEFT. LEFT. A
monkey will clock you on the head with a fruit, dance on your chest, and take
your binoculars. We'll fix him later. LEFT. You'll see a woman doing
laundry outside. Talk to her. Tell her you're a real man. She'll have you
answer some questions. Tell her you are shipwrecked here. When she asks you
about the torque wrench, say "Tool to measure angular force". Then she'll
ask you about where to put the forks on a table. Say, "They go wherever they
land when I throw them." She'll invite you inside to show you a good time.
When the guards are all done watching you, you'll be able to walk around.
Grab a twinkifruit from the sack on the right. DOWN. RIGHT. RIGHT. RIGHT.
Put the twinkifruit on your trap. A big fat bouncing cavewoman will come and
fall in. Now you can get past her, otherwise she eats you. RIGHT. There's
a plant shoot lying on the ground on the right. Pick it up and put the
poison darts in it. Now use the blowgun to hose the monkey down. He'll fall
down and run off. Get your binoculars. Told ya we'd fix him! LEFT. UP.
UP. Get the two bones lying next to the skull. Climb up the ladder and use
the binoculars to look north. A guard will punch in a number sequence and
teleport away. WRITE IT DOWN. UP. Enter the teleporter. Punch in the
number sequence, then hit the smiley face.


Some guards capture you and there's a lengthy sequence. Once it's all done
and you are in your cell, a dude will be trying to get your attention. Talk
to him. He's an alien that wants to be rescued. Ask him about everything
until all of the options are exhausted. The guards will come back and you'll
be tied down to a gurney. No prob. Talk to the intern. Ask her all
questions until all options are exhausted. She'll leave to go see what the
doctor is up to. Grab the scalpel. The doc will examine you and ask you
questions. Tell her your heart is good, your kidneys fine, and you're an
Outy. She'll stick you with a needle and you'll be back in your cell.
Talk to the alien again. Pry the air vent open with the scalpel. Go into the
duct. Crawl above the 2nd cell from the right. DOWN. Talk to the alien.
RIGHT. Crawl to the 1st cell from the left. DOWN. Kick the grate. You
should see a coffee mug and two monitors to the right of it. Click on the
monitors. On the left monitor, click on the 2 dice. Click on the red button
twice. Wow, all of the prisoners are free! A guard comes and is pointing a
gun at you. No sweat. Our alien friend makes good on his threat and smashes
her against the wall. Cool. RIGHT. RIGHT. Snag the security card from the
bloody dead guard in the cell. RIGHT. RIGHT. RIGHT. Grab the tape from
the hand of the fried body on the gurney. LEFT. LEFT. LEFT. LEFT. LEFT.
LEFT. LEFT. Enter the Gender Bender (the platform in the middle). You'll
be transformed into a woman. No problem. We'll get our ding-a-ling back
later. RIGHT. UP. UP. Get the tape player. Get the arm laying on the
floor. Put the arm on the hand scanner. Grab your stuff from inside the
vault. UP. Get the credit chip off of the dead guard's body. DOWN. DOWN.
DOWN. DOWN. DOWN. You'll be scanned to see if you have a hole. We got
one. No big whoop. RIGHT into the bar. Grab the repair list from the pocket
of the dike sitting at the bar. Sit on a stool. Talk to the bartender.
Order a bottle. Get Venusian brandy. Charge it to your credit chip. DOWN.
DOWN. Use the security card on the Armory slot. Go inside. Look at the
chest on the right. Get the target module. DOWN. RIGHT. Use the card
again to enter the Storage closet. Look at the carton on the left. Get the
charge cases. DOWN. Go into the lab (next door over). Put the tape in the
tape player. Activate it. Write down how to make the big daddy explosives.
Get the 3 small flasks. Now put the ingredients in the kettle according to
what the tape player said. Once that is done, put the charge cases in the
kettle to fill them up with explosives. Wow, we got boom-booms now! DOWN.
LEFT. LEFT. UP. UP. UP. UP. Enter the teleporter. Punch in the first
number that "has been recently tuned."

Now you're back on the planet, but this time as a woman. DOWN. DOWN. DOWN.
LEFT. LEFT. LEFT. UP. Talk to the lady. Ask her where the vase is, then
if you can have the roast chicken. Take the chicken. DOWN. RIGHT. RIGHT.
RIGHT. UP. UP. UP. Enter the teleporter. Punch in the same number you
did the first time around at this screen.

Now you're back on the ship. DOWN. DOWN. DOWN. LEFT. Enter the Gender
Bender so you can get Little Rex back. RIGHT. UP. UP. UP. Enter the
teleporter. Read the repair list. You want to teleport to the second number
that is "in need of minor adjustments." Punch in that 4-digit number, then
smiley face.

Now we can go around the city inside this ship. LEFT. Get in the car. You
click on the left and right arrows to change destination, and hit the green
button to go there.

Head for Abdul's Auto Shop. Once you get there, throw the bone over the
fence. The dog will chase it. Enter through the side entrance. The dog
will zip back in. Throw the bone at the danger zone. The dog will start
chewing on it. Push the "Down" button on the wall. Oh no, poor little
doggie got all squished. Too bad. Get the rearview mirror on the storage
box. Get the polycement in the drawer on the right. Exit.

Enter the car. Head for Kane Laboratory. Enter the lab. Pull the lever.
Put the rearview mirror on the pedestal. Exit. Enter Macho Prose Software.
Get the penlight on the counter. Disassemble it to get the Durafail
batteries. Exit.

Enter the car. Head for Residential. Go RIGHT into the building. You'll
see the laser shooting through the floor. RIGHT. Get the compact case off
of the vanity. LEFT. Reflect the laser with the compact case. Open the
safe. Get the door key. Exit.

Enter the car. Head for Buckluster Video. Unlock the door with the door
key. Take phone handset. Disassemble it. Put the Durafail batteries in
handset. Put the handset back on the base. Exit. Go back in. The
batteries should now be recharged. Get the handset. Disassemble it. Exit.
Go RIGHT into the alley. Talk to Herman the Hermit. Find out everything.
Give him the 4 batteries. He'll give you a fake ID. LEFT.

Enter the car. Head for Sandbar Restaurant. Enter the restaurant. Get the
fishing rod. Disassemble it. You now have fishing line. Look at the case
register. Get the padlock key. Exit.

Enter the car. Head for South Maintenance. Put the fake ID in the card
slot. Attach the fishing line to the hook (on the third cement pylon from
left). RIGHT. Get the ID from the pile of bones. LEFT. LEFT.

Enter the car. Head for East Maintenance. Put the ID in the card slot. Go
inside. Get the detonators. Exit.

Enter the car. Head for Williams Bypass. Walk to the control box. Unlock
control box with padlock key. A boat will now be lowered in front of the
Sandbar Restaurant.

Enter the car. Head for North Sea Window. Put bomb in chicken. Put timer
module on bomb. Put the timebomb on the ledge.

Enter the car. Head for South Maintenance. It should switch to a picture of
the bomb going off. You'll arrive at the top with the city flooded. Take
the fishing line. Climb into the boat.

Put bottle on pedestal. You now have the vase. Enter the teleporter. Type
in the first number that is "in need of minor adjustments".

- SIT BACK AND ENJOY THE ENDING OF THE GAME -

Hope you all enjoyed this very straightforward solve. Didn't want to bother
with humor. Just wanted to get past the game and delete it. 13 more megs
free now. Look for more products from me in the future, including:

- More character editors
- Any solves and docs I may happen to do
- The Celerity Master Editor program, which will have:
- User Editor
- File Editor
- Protocol Editor
- Any other features you'd like to see (just tell me)
The whole point of this is that there are too many seperate
utilities, and it'd be nice to have one complete package.

Greets go to: Space Homey - Thanks for getting me unstuck on the bones!
ICS - Give me a greet, and you'll get one back!
Rifleman - It's cool with me now.
INC dudes - Whassup?