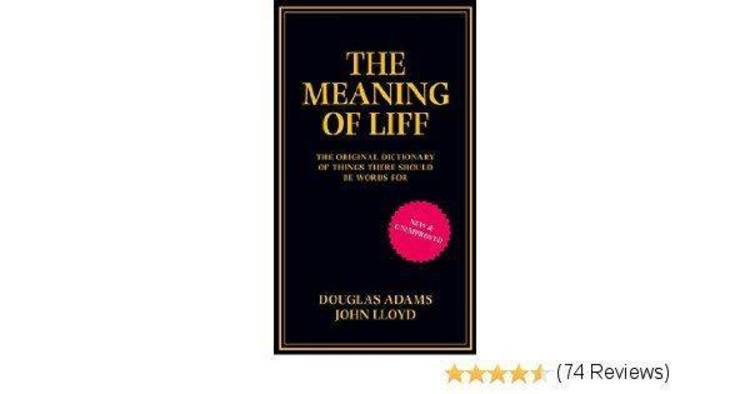 Contents of the LIFF.TXT file

The file LIFF.HLP is a WinHelp 3.1 implementation of "The Meaning of Liff"
by Douglas Adams (the author of the trilogy of four "The Hitch Hiker's Guide
to the Galaxy") and John Lloyd. It's a hilariously funny kind of dictionary
which uses words from various places around the world (mainly UK) and gives
them new meanings describing various experiences, feelings, situations etc. in
life. As the authors state in the introduction to the book:


In Life*, there are many hundreds of common experiences, feelings, situations
and even objects which we all know and recognize, but for which no words
exists.

On the other hand, the world is littered with thousands of spare words which
spend their time doing nothing but loafing about on signposts pointing at
places.

Our job, as we see it, is to get these words down off the signposts and into
the mouths of babes and sucklings and so on, where they can start earning their
keep in everyday conversation and make a more positive contributiuon to society.


A lot of the words in the book are explained by referencing to other words in
the book, making it very suitable for a WinHelp implementation.

This implementation is as close to the book as it can get by using WinHelp.
There's even a picture of it in there, which is natural size on a standard
640x480 VGA monitor. The book also contains an extensive "Index of meanings",
which is implemented by using keywords accessible through the "Search"-button.

The only thing not included in the WinHelp version, are the small maps showing
where each place is on the globe (most of them are in the UK).

LIFF.HLP is structured by using Xantippe from IRIS Media Systems. It may be
distributed freely as long as this file LIFF.TXT and the icon file LIFF.ICO
are distributed along with it. The source file to "The Meaning of Liff" is
included in the latest version of Xantippe, which can also be found in a
shareware version here on CIS. Compared to the help file that can be build
from the automatically generated files from Xantippe for version 3.0 of the
Help Compiler, the following changes has been made to this WinHelp 3.1 specific
version:

- Uses the CITATION, COPYRIGHT and ICON options. (The icon is included for
use in a Program Manager group.)

- Uses a MRB for the book picture, ensuring proper appearance on mono screens.

- Uses italics in the few places it's used in the book. (Italics is not
supported by Xantippe directly).

- Removed the (id=xxx) strings from topic names, so they don't show up in the
search results or history list.

- Shortened context strings and the font table for size optimizations.

- Added a few cosmetic changes, mainly to the contents topic.

Being a dictionary, "The Meaning of Liff" is very hierarchically structured:


All words beginning with the same letter becomes a seperate browse sequence.
Xantippe doesn't generate a browse sequence for the first level (A,B,...,Z),
so this has been added. These are controlled with the standard Browse Buttons
"<<" and ">>". In addition to these, the "[<<"-button (press the "["-key) goes
to the first topic in the current sequence, and the ">>]"-button (press the
"]"-key) goes to the last topic in the current sequence. Finally, the
"Up"-button has been added. In contradiction to the standard "Back"-button,
which takes you back to the last *viewed* topic, the "Up"-button takes you one
*level* up in the hierarchi. If you for instance are viewing topic "Baldock"
after having viewed topic "Babworth" (by pressing the ">>"-button), the
"Back"-button will take you back to topic "Baldock", where the "Up"-button
will take you one level up to the list of all the words beginning with "B".
All buttons are grayed according to the current context.


If you have any comments or suggestions, I can be contacted at 100023,3665.
I hope you have as much fun using LIFF.HLP as I had creating it. Enjoy!