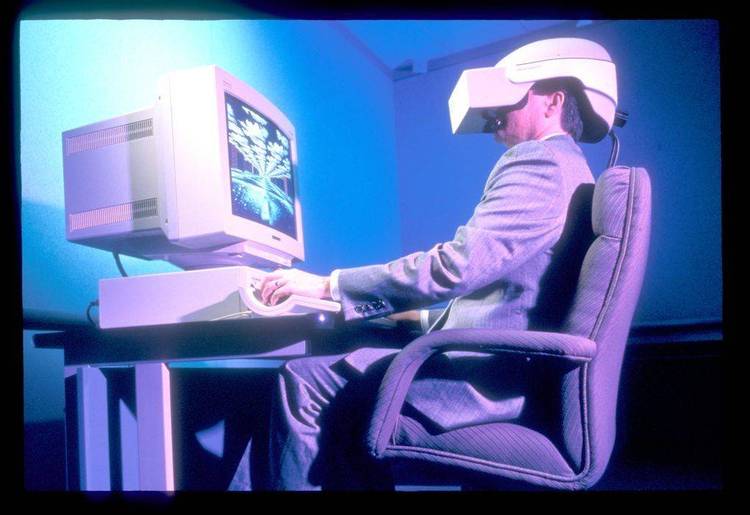 Contents of the FARMER.TXT file

Cyberspace: Getting There From Here.
(c) Copyright 1989 F. Randall Farmer

Randy was lead C64 programmer on the fabled 'Habitat'(1) project
for Lucasfilm Games. He has taken a hiatus from building Cyberspace
while he works on a new telecommunications product at AMIX, a
subsidiary of Autodesk. He can be reached via Usenet as
[email protected] or through the Journal BBS.

"Golden Vaporware" is a term I've heard Ted Nelson(2) use to
describe such exciting computer projects as Xanadu, Dynabook and
Cyberspace. I understood the term to mean Really-Great-Stuff-That-
People-Are-(Sort-Of)-Working-On-And-Never-Ship. But now, it
seems, "The Age Of Golden Vaporware" has arrived. Ted's Xanadu
project is now well under way and should ship product in '90. There
is a company called Dynabook Technologies that has released "step 2"
of the "20 steps"(3) to Alan Kay's vision of the ultimate laptop. And
Cyberspace has been prototyped by QuantumLink and Lucasfilm.

These projects are likely to succeed not because they are
exciting to us techie-geeks, but because they have solid commercial
and technical foundations. Here I will illustrate a path from current
software and hardware technologies to the Cyberspace that many of
us have dreamed of for almost 20 years.


What is Cyberspace anyway?

"Cyberspace" is a fuzzily defined word that has been in the
press a lot recently(4)(at least in Silicon Valley). Vernor Vinge first
described a vision of what might now be called Cyberspace in his
novella True Names(5). The hero of Vinges's story connected to "The
Other Plane" using EEG electrodes placed on the forehead. The Other
Plane was a place where complicated software systems were
represented by familiar objects. The Max Headroom television show
used similar representations in various episodes. Other fictional
treatments include William Gibson's Neuromancer (6), which has
been turned into a popular graphic adventure, and other
"Cyberpunk" novels. Here the vision of Cyberspace is based around
commercial and governmental network computer access, where
"cowboys" and "wizards" break in and wreak fiscal havoc. In these
works, Cyberspace is a metaphor for abstract concepts.

Autodesk, maker of the best selling AutoCAD system, has
thrown its hat into the Cyberspace ring where it joins VPL's Jaron
Lanier and NASA-AMES. All of these products share similar base
technologies and assumptions: two head-mounted TV monitors for
stereo imaging, a powerful computer, and a 3D input device like
VPL's DataGlove. They are primarily single user systems, and, in the
case of at least Autodesk's product, probably aimed at CAD users who
want to edit drawings in three dimensions. There are many other
applications, but discussion is beyond the scope of this article. The
key to all of these systems is enough computer power to do double-
buffered stereoscopic real-time graphics at a high frame rate (say
20-30 frames/second). This technology is expensive: in the case of
VPL's "virtual reality" system (their special two user version) the
price tag weighs in at $69,925. The "Eyephones" cost $9,400 and the
glove $8,800.(7) These companies envision Cyberspace as a new kind
of user interface.

To me, Cyberspace is a place, not just an interface or a
metaphor. A place where people, regardless of location, hardware, or
purpose can get together in a participatory experience to conduct
business, socialize, or have a good game of SpaceCombat9.6.

Why this vision instead of the others? People. Unlike the
interactions with artificial personalities created for computer
adventure games, Cyberspace interactions could create relationships
that are "greater than the sum of their parts". Here the consequences
of individual actions take on a greater significance because they
affect the world of, and the personal belongings of the other
participants. Because Cyberspace will be so malleable, each
individual can "make a dent"(8) and participate in its ongoing
creation and adaptation.

This is not speculation! During Habitat's beta test, several social
institutions sprang up spontaneously: There were marriages and
divorces, a church (complete with a real-world Greek Orthodox
minister), a loose guild of thieves, an elected sheriff (to combat the
thieves), a newspaper (with a rather eccentric editor), and before
long two lawyers hung up their shingle to sort out claims. And this
was with only about 150 people! My vision encompasses tens of
thousands of simultaneous participants.

Bandwidth is the most overrated problem. Everybody thinks
you need to send megabytes of data every minute to each user in
order to make Cyberspace work. This is simply not true. Habitat
works at a mere 300 baud. The keys to keeping bandwidth down are
distributed processing (having the local computer do most of the
display and interface work), object oriented command messages, and
avoiding communication intensive graphics primitives (such as those
associated with NAPLPS, that slower-than-molasses protocol they use
for Prodigy and other Videotex systems).

Graphic Resolution, User Interface and Local Horsepower issues
should all be lumped together. To be viable over time, Cyberspace
must be designed with the "to each according to his abilities"
principle. If a C64 with NTSC TV and joystick-only interface
encounters a 60 megahertz 486 user with Eyephones and DataGlove,
the interaction should be filtered so that each user can have a
satisfying experience (e.g the C64 user doesn't see all the intricate
detail the 486er has put into his attire, and all people walk exactly
the same, but they can still sit, chat, and play a nice game of
Strattagema.)

Event Integrity is a side effect of distributed processing. Simply
put: you can't trust the home computer. Hackers have all the time in
the world to crack the software and make it send messages it
shouldn't. This is akin to the long debated copy protection problem,
but comes with its own unique solution: The Host. Since the host is
the final arbiter of all events, it should be programmed at a very
high level to reject bad messages.

Data Communications Standards are key to the future viability
of Cyberspace. A protocol is required that is efficient and forward
looking, with hooks for future revisions (as bandwith increases) and
data encryption. Anything that is going to be used for business will
need to transmit its data securely for protection against espionage.
Also, the standard needs to address such issues as Email and
gateways to those entrenched text-only systems. I want to read my
Usenet mail printed on a sheet of paper in my Cyberhand!

Since the host coordinates all activity for all users, Host

Horsepower is by far the most critical issue. For the first few years of
operations, Cyberspace will have a single centralized host consisting
of several connected multi-processing computers. In order to keep
overhead to a minimum, bandwidth and database access will need to
be tightly limited. The communications protocol will need to be
super efficient and messages must be kept tiny. Eventually there
will be several independent Cyberspaces, perhaps on LANs or a
larger BBS. Of course, while you are walking around in your office
Cyberspace, you might want to go to other Cyberspaces, so a
distributed host model will need to be designed. By not having a
central host keep track of everything and everyone, this distributed
model will actually decrease the load on each host. This will allow
Cyberspace to take on a few interesting features: 1) Each host can be
a different kind of place, with different 'rules' (e.g. A role-playing
Cyberhost would probably have monsters, combat rules -including
character death- and a no-holds-barred policy about participant
behavior whereas an office Cyberhost would have access protection
and wouldn't allow personal combat of any type), 2) Increased
capacity without loss of access, and 3) Faster growth.

When will it happen?

Rather than pin a date on my Cyberverse, I will outline a
possible implementation path, including all of the developments
publicly announced to date.

Event: (about 2010) AT&T finally completes ISDN. Wall size
videophone reaching suburban markets (10-20 years late?)
Event: Congress takes significant note of the Cyberverse, because
trade unions (and other lobbies) note significant
changes in the distribution of political power.
First Cyberspace lobby arrives in Washington.
Event:10-20% of Americans spend over 4 hours per day "on the
Other Side". First chapter of Mothers Against Cyberspace
forms, claims 'Junior' never goes out to playI
(We gotta think about this stuff too, ya know!)

Oh, yeah? A 386/CDROM version of Habitat will soon be
released in Japan. Other foreign companies are also interested in this
technology, and some are talking about multi-machine support,
standards, and the future. My only fear is that the long-term nature
of this project will cause American companies to shy away, and let
yet another new technology be monopolized by other, more forward-
looking nations.

(1)Credit where credit is due: Chip Morningstar was original designer
and leader of the Habitat project. Aric Wilmunder was the other
primary C64 programmer. Janet Hunter did most of the Host work. I
was also chief operator and world builder. Habitat has not yet been
released in its complete form (it will in Japan in '90). For a taste of a
much-scaled-down version, check out Club Caribe on QuantumLink
(you'll need a C64 & software). Call 800-782-2278 for details.
(2) Nelson, Theodor, Standard Public Xanadu Speech. Xanadu is the
name of the original mega-hypertext product.
(3) Khosla, Vinod, of Dynabook Technologies quoted in Bay Area
Computer Currents "Dynabook! Dynamite?" Vol 7,#4 pp 22-24.
(4) Laurel, Brenda, mentions Cyberspace in "New Interfaces for
Interactive Entertainment" in Vol 2, #5 of The Journal of Computer
Game Design.
(5) Vinge, Vernor, "True Names" republished in an anthology "True
Names and Other Dangers" (mandatory reading for would-be
Cyberhacks)
(6) Gibson, William, "Neuromancer" (recommended reading)
7)Nix, Shan, interviews Jaron Lanier of VPL in The San Fransisco
Chronicle, "Welcome to the World of Hyper-Reality" early August
1986, pp B1,B6
(8) ibid
(9)ISDN:Integrated Services Digital Network: instead of converting
digital data to analog (via modem) and back again, digital data is
dropped directly on to phone lines. Maximum throughput of full scale
fiber-optic ISDN is 1 to 6 gigabits/second or more. Several foreign
countries have made ISDN a national priority.
(10)Nelson, Theodor: Computer Lib/Dream Machines Microsoft Press
Revised Edition 1987 pp 27-29

Don't pay too much attention to the timeline, it's meant mostly to point
out that there are no real technical barriers to this vision, and the future
should only see the kind of improvments we've seen with computers: Faster,
Bigger, and more Resolution.