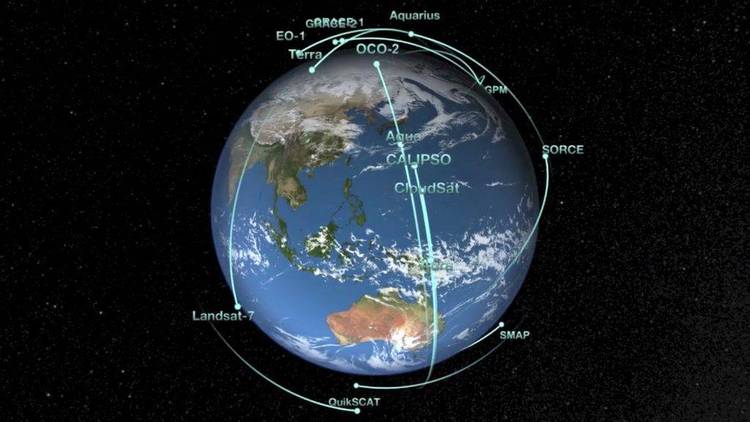 Contents of the ENVIRON.TXT file


The Earth's environment changes continually, shifting as
quickly as a rainy day turns sunny or as slowly as a continent
drifts. NASA has been studying the Earth and its changing face
since the agency's inception, observing the atmosphere, oceans,
land, ice and snow, and their influence on climate and weather.

Past NASA satellite missions have used a variety of remote-
sensing instruments to study components of the Earth system. The
Coastal Zone Color Scanner on Nimbus-7 provided extensive
observations of the oceans' biological productivity. The Total
Ozone Mapping Spectrometer, on the same satellite, is still
returning data on global ozone levels. The Earth Radiation
Budget Satellite measured solar radiation received by the Earth
and radiation emitted by the planet. SEASAT returned the first
global data on ocean processes.

This year the United States and its international partners
are mounting a comprehensive global-scale examination of the
planet to study the interaction of all the environmental factors
- air, water, land, biota - that make up the Earth system. The
goal is to increase our scientific understanding of the Earth and
develop accurate predictive models that can inform policy
decision makers, allowing us to protect the planet's and
humanity's future.

At the Paris Economic Summit in 1989, President Bush asked
the attending industrialized nations to join with the United
States in a comprehensive study of the Earth as a system. Using
complementary space- and ground-based research, the U.S. Global
Change Research Program will provide the knowledge that will
allow informed decisions to be made on global warming, ozone
depletion and other elements of global change.

MISSION TO PLANET EARTH AND THE EARTH OBSERVING SYSTEM

NASA is a major participant in U.S. Global Change Research
Program through its Mission to Planet Earth, a space-based
research program encompassing virtually all of the agency's Earth
sciences and application activities. The centerpiece of Mission
to Planet Earth is the Earth Observing System, a series of
satellites carrying instruments that will make critical
observations. Even before EOS is launched, NASA will launch 19
Earth science missions to study selected aspects of the
environment. The EOS Data and Information System is an integral
part of EOS, coming on line in the early 1990s to evaluate
existing data and allow for corrections of the system before EOS
itself begins returning information. Once the satellites are
operating, EOS data will be made readily available to scientists
around the world.

EOS, on which NASA began definition studies in 1982, will
consist of five instrument-laden platforms in low-Earth orbit.
Two will be launched by NASA (the first in fiscal 1998), two by
the European Space Agency (the first in 1997) and one by Japan
(1998). The platforms' instruments will make comprehensive
observations of the Earth's atmosphere, oceans and land.
Instruments proposed to fly on the platforms include imaging
spectrometers that will measure the Earth's physical and
biological processes on scales of a square kilometer or less; an
instrument to observe the Earth's radiation budget; instruments
to determine atmospheric and oceanic circulations; and
instruments to determine the physics and chemistry of the
atmosphere. EOS data will be essential in developing models that
can accurately predict global change.

Earth Probes, low cost missions designed for small launch
vehicles, are instruments and satellites that will complement
EOS' broad environmental picture with highly focussed studies
that provide early data. To continue global ozone mapping, Total
Ozone Mapping Spectrometers will be flown aboard U.S. and foreign
spacecraft during the next few years. Other Earth Probes will
study tropical rainfall, ocean productivity and the interactions
of the Earth's crust and interior.

In addition to free-flying missions, a series of Spacelab
missions designated the Atmospheric Laboratory for Applications
and Science, are planned for the Space Shuttle. These missions,
which will involve scientists from the United States, Belgium,
France, West Germany, Japan and Switzerland, will investigate
atmospheric science and the interactions of the far upper
atmosphere with space plasma. The Shuttle also will carry the
Shuttle Solar Backscatter Ultraviolet experiment at regular
intervals to calibrate ozone measurements made by NIMBUS-7 and
other satellites. The Shuttle Imaging Radar, developed by the
United States, Germany and Italy, will measure surface geology
and vegetation.

EOS instruments also are planned to fly on Space Station
Freedom to follow the daily cycle of certain key Earth processes
at low latitudes. These instruments include a lightning mapper
to determine energy and chemical input to the atmosphere; an
instrument to measure the radiation budget of the Earth's
tropics; and an instrument to determine the aerosol loading of
the atmosphere.

The Upper Atmosphere Research Satellite, to be launched in
1991, will provide the first comprehensive measurements of
dynamic, radiative and chemical processes in the atmosphere and
their interactions. These data will help determine the extent
and durability of the stratospheric ozone layer. The instruments
are from the United States, the United Kingdom, Canada and France
and the data will be analyzed by an international scientific
team.

TOPEX/POSEIDON is a U.S. - French ocean topography
experiment to be launched aboard an Ariane rocket in 1992. This
mission will provide the first detailed measurements of the
oceans' global circulation patterns, including the manner by
which strong poleward currents, such as the Gulf Stream, and
currents flowing toward the equator distribute heat across the
globe.

The NASA Scatterometer will provide global measurements of
sea surface winds. The Scatterometer, to be launched in 1995
aboard the Japanese Advanced Earth Observing Satellite, will
enable better understanding of the coupling of the oceans and the
atmosphere. These measurements of surface winds, together with
higher altitude cloud measurements from other instruments, will
give a clearer picture of heat, water vapor and aerosol
distribution across the globe.