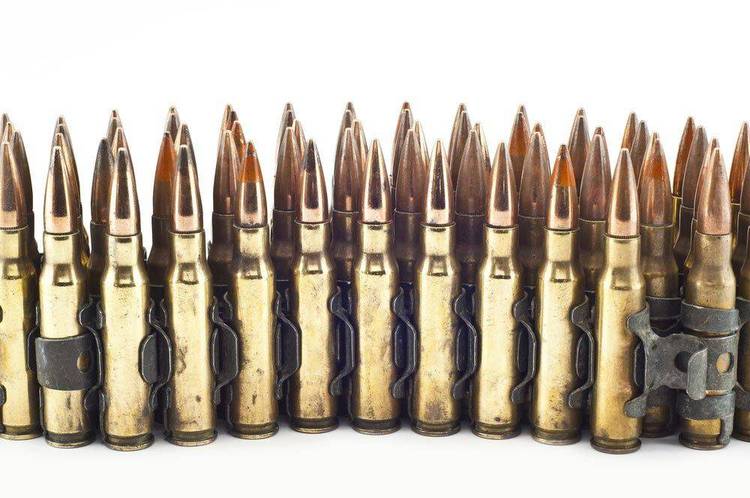 SUMMARY DATA ON 7.62x39 - Revised CEH 4-23-90 -
This is additional data which was not included in the recent
American Rifleman article.
I have reloaded thousands of rounds of this 7.62X39 ammunition with
both cast bullets and jacketed, and have fired them in the AK and
the SKS. I got frustrated with the AK as accuracy of these seems
to be generally poor, but the SKS is more reasonable, and is a real
bargain these days. It seems the best an AK will do is about 5-6
moa, and the SKS with good ammo will do 3-4, sometimes better. The
gas ports on these guns are larger than they need to be for
reliable functioning, so light cast bullet loads down to about 1400
f.p.s. work fine. None of the common cast bullet designs are quite
right for this caliber, because the necks are so short, and the
groove diameters run large.

I designed a bullet and had a custom mould made by NEI of Canyon
City, OR, which they identify by the number 155.311GC. This bullet
is .92" long and weighs 155 grs. in linotype or about 160-grs. in
wheelweight alloy. I designed it with the idea to produce the
heaviest bullet which could be loaded effectively without the GC
poking into the powder space, and which would be big enough on the
forepart to fill the large throats on the AK and SKS, as well as
in the 7.62x54R Russian, .303 British, 7.65 Argentine, 7.7 Jap,
etc. It has only one grease groove, and a crimp groove .26" from
the base. The rear driving band casts .313", the front band .311"
and the forepart ahead of the crimp groove is .310", and the ogival
radius starts from this large diameter in order to maximize bearing
length. The bullet has proven very accurate, and outshoots ball
ammo in the SKS or AK with any reasonable load, and in a bolt-
action rifle will stay under 1-1/4" 10-shot groups at 100 yards
taking bullets out of a 5-cavity gang mould.


I don't have the pressure gun to work with which I did when at
Ruger, but in my experience with several rifles, these loads should
be OK. When I did pressure tests with H322 and Accurate Arms 2230
and Hodgdon H335 it appeared you couldn't get enough into the case
with a 125-gr. bullet to get into any trouble, and a caseful made
a highly satisfactory load. H322 used to be about the cheapest
powder around, and works very well in this caliber. I use 28 grs.
with a 125-gr. bullet for about 2200, and 25 grs. with a 150-gr.
bullet for about 1900. With my cast bullet I use 24 grs. for about
1850, which works very well.

I have also used IMR-4895 with good results. About 17 grs. is the
minimum charge which will function the SKS with a 160-gr. cast
bullet, but you can stuff the case with all the powder it will hold
and you can't get in any trouble. It works well with cast bullets
from 150 grs. up.

As for reloading the Berdan primed cases, it isn't worth the
trouble.


Charge Establishment for Accurate Arms 1680 propellant in SKS with
NEI 155.311GC bullet, as above.

BRASS CASE WITH THIS CODE and nny headstamp is Yugo proof

CEH FIRINGS OF AKM FOR COMPARISON WITH SKS

This performance is better than expected of PS Ball in average AKM
and AK47, attributable to better quality of Lapua ammunition.
Note ammunition comparison with SKS above, refiring the same rifle
in Jan., 1988, compared to 1983 results.

EFFECTS OF TRAINING AND DOCTRINE ON INFANTRY RIFLE EFFECTIVENESS

U.S. doctrine is that the M16 rifle be carried habitually with the
sights set to the BSR unless there is a need to set the sights for
some other range and there is time to do so. American GI's are
taught to aim at the center of mass of the visible target at all
times, which centers the densest portion of the round to round shot
dispersion in the center of the target, to maximize hit
probability. Soviet doctrine is to use a bottom of target point of
aim with the sights set at the BSR at ranges up to 300 metres, and
to set the sights for the estimated range at longer distances. In operational situations the type and magnitude of other system
errors cancel any effect of wind deflection upon hit probability
for the average soldier. The intrinsic single-shot round-to-round
dispersion of the AK47 is larger than the newer AK74, but both
Soviet rifles have a larger intrinsic RRD than either the M16A1 or
M16A2. These differences are not meaningful in most operational
combat situations because stress is the great equalizer. If the
shooter's error approaches the worst hitting performance seen in
peacetime field experiments the differences in being able to hit
an "E" silhouette target caused by differences in inherent weapon
accuracy are wiped out. If effective range is gaged by single-shot
hitting performance of average soldiers in combat situations, the
AK47, AK74, M16A1 and M16A2 have almost no difference in
performance. In US Army testing of the AK-74 rifle it was found
that the time to hit was the same for the AK-74 and M16A1 for
target exposure times of 2-3.5 seconds, but that the
muzzle-break-compensator of the AK-74 was an aid to improving hit
probability at close-range targets with burst fire. The third
round in a burst from the M16 seldom if ever hits anything and is
nothing more than a waste of ammunition. Personnel should be
taught to use two-round "double-taps" for close range engagements
within 50 yds. Beyond 50 yards rapid semiautomatic fire is far
more effective than any type of automatic fire, in being able to
obtain hits, as well as in conserving ammunition.